The top ten most visited monuments in Paris. Notre-Dame Cathedral was number one (12 million visitors in 2017). The Sacré-Coeur Basilica in Montmartre is number two (10). The Louvre, both a museum and a royal palace, is number three (8). The royal Palace of Versailles close to Paris is number four (7.7). The Eiffel Tower is number five (6.2). Centre Pompidou, both a superb modern building and a museum, is number six (3.337). The small Chapel of the Miraculous medal is the surprising number seven (2). The famous Arc de Triomphe is number eight (1.583). Fondation Louis Vuitton, a 21st century monument, is number 9 (1.4). Les Invalides, housing Napoléon's tomb, is number ten (1.176). Sightseeing in Paris.

Completed in 1889 for Paris' world exhibition, the Tour Eiffel - Eiffel Tower in English - was designed and built in just two years by 132 workers and 50 engineers. At 300 meters, it remained the world tallest monument until 1930 when the Chrysler Building was completed in New York City.

Due to the addition of a broadcasting aerial at the top in 1957, it is now taller than the Chrysler Building by 5.2 meters and the tallest monument in the city. It is also the world's most visited paid monument. Detailed Eiffel Tower facts.

Visit the Eiffel Tower monument on your own or as part of a guided bus city tour. There are many options. 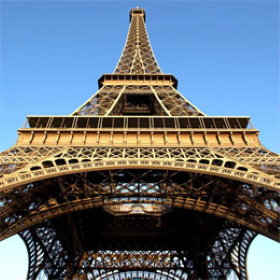 The Eiffel Tower was build in 1889 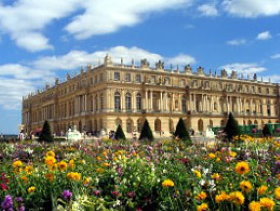 Built in 13th century, Notre-Dame Cathedral is undoubtedly one of the top monuments from the Middle Ages in Europe. Notre-Dame was built between 1163 and 1270. A pure treasure, Notre-Dame is not just a wonderful monument. Fervent Catholic masses and beautiful concerts gave Notre-Dame its full dimensions. Unfortunately, the fire of April 15th 2019 destroyed part of Notre-Dame, which is for unlimited time not be to visited. Notre-Dame Cathedral facts.

Notre-Dame was the most visited monument in the city ahead of the Eiffel Tower and Sacré-Coeur Basilica in Montmartre. Check page on churches in Paris. They are among the best monuments of the city and are often open for free visits. 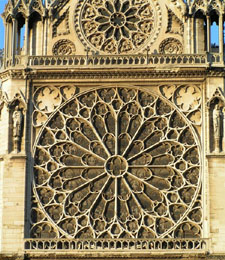 Notre-Dame is the Cathedral of Paris

Arc de Triomphe is a very famous Paris monument. A legacy of Emperor Napoléon, whose tomb is in Les Invalides, it is the rallying point of French troops parading down the Champs-Elysées on Bastille day, July 14th, the French National Day. Arc de Triomphe is a memorial dedicated to the French soldiers who died during World War One. The view from the top of Arc de Triomphe over the twelve radiating avenues from it and the whole city of Paris is spectacular.

Centre Pompidou is the most spectacular 20th century monument in Paris. It was designed in 1977 by architects Renzo Piano from Italy and Richard Rodgers from the UK to make art and culture accessible to everyone. 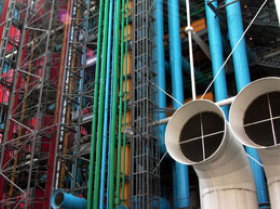 The Fondation Louis Vuitton is the most beautiful monument in the City of Lights since the Eiffel Tower. The contemporary pieces of art on display are at pain to match the marvelous building designed by Architect Frank Gehry, a Pritzker prize winner living in Los Angeles. Franck Gehry is most of all known in Europe for the Bilbao Guggenheim Museum.

Inaugurated in October 2014, the Fondation Louis Vuitton instantly became a must see monument in Paris, a city already so rich with palaces, churches and civil architecture.

A coach tour is a good and fast way to get a glimpse of most famous monuments in the city. We recommend you the full day Paris tour to see Notre-Dame, Louvre, Opéra Garnier, Arc de Triomphe, Invalides, Sacre Coeur and the most famous districts in town: Le Marais, Champs-Elysees and Montmartre. The tour includes a lunch at the Eiffel Tower and a one hour Seine cruise to admire the many monuments along the river banks. Check guided tour details and book. 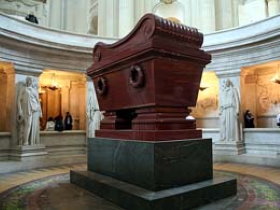 The city has many other great monuments. Among them:
BNF, the 20th century French national library, the largest contemporary monument on the banks of the Seine river.
Palais de Chaillot, a 1937 must do for its spectacular view of the Eiffel Tower and its museums. Also called Trocadéro.
Chapel of Lady of the Miraculous Medal, a sanctuary to the Virgin attracting two million pilgrims each year.
Hotel de Ville, 19th century Paris City Hall, the replica of the original renaissance building destroyed in 1871
Grande Arche, Opéra Bastille and Stade de France, three top 20th century monuments.
Paris Mosque, built in the 20th century as a tribute to the many muslims soldiers who died during WW1
Map of Paris monuments 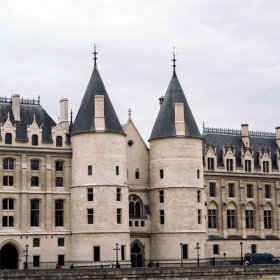 La Conciergerie was a royal palace

The most amazing monument you can see in Paris is the Statue of Liberty. The original Statue of Liberty in New-York City was a gift from France to America in 1886, designed by Auguste Bartholdi and moulded in Paris.

The Statue of Liberty on the Seine River

The Paris region is rich with incredible monuments of the past that you can all easily visit in half a day or a full day from Paris by car or by train. There are also convenient bus tours to Fontainebleau and Vaux Le Vicomte castles. Vaux Le Vicomte is not reachable by train.

Saint-Denis Basilica (half a day by metro)
Unesco world heritage monuments:
Fontainebleau Castle (half a day to one day)

Fontainebleau Castle is a renaissance castle

Many of the monuments of Paris could have been distroyed in 1944 with the liberation of the city. Hitler had no intention of preserving the city, nor of declaring it open, like Rome in June 1944. General von Choltitz, the last military governor of occupied Paris, received orders without nuance, including that of August 22: "Paris is to be transformed into a heap of ruins. The general must defend the city to the last man and will perish if necessary under the rubble." Why then were the capital and its monuments spared? Von Choltitz did not follow his Führer's orders. The general did not see the logic of such destruction. The Battle of Normandy was lost, the German troops fell back, the meager stationed contingents evacuated the city. Ravaging the capital would have been costly in human lives, including German ones, unnecessary from a military point of view and hindering the movement of the Reich soldiers withdrawing from Normandy.

In addition, the Swedish consul Raoul Nordling would have convinced on the night of August 24 to August 25 the German general to give up destroying the monuments and the bridges. The Allies, worried about the destruction of the city, also warned von Choltitz. On August 24, they handed von Choltitz a letter threatening him to be brought before a war tribunal. The German governor no doubt finally had concern for his own posterity: he who had participated in the destruction of Rotterdam and Sevastopol, in the extermination of the Jews on the Eastern Front, could pose as the savior of Paris.