Hotel de Ville is the Paris City Hall. Located in the Le Marais district, it is a a 19th century monumental replica of the 15th century original city hall. Hotel de Ville is at the heart of the administrative power in the City of Lights. Paris monuments.

The Hotel de Ville (Paris City Hall) has been the heart of political and social life in the city since 1357.

The City Hall, the largest in Europe, is located at the heart of the city on the banks of the Seine river and the edge of fashionable Le Marais district. Although the city of Paris is relatively small with 2 million people, the City Hall exerts its influence over the 12 million people Ile de France region.

The city is divided into 20 arrondissements. Each one has its own city hall with limited administrative power. Check map of Paris arrondissements with top city sights. 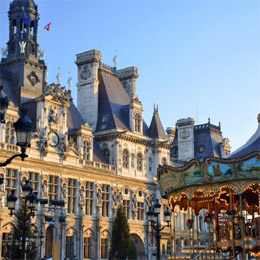 The first City Hall building (picture) was built between 1523 and 1628 on a design by Italian architect Le Boccador. Le Boccador also partly designed the Chambord Castle, the most famous of the Chateaux de la Loire.

This City Hall was destroyed by fire (picture) in May 1871 during the La Commune uprising. The City Hall was rebuilt on the same design, but larger, between 1874 and 1882. 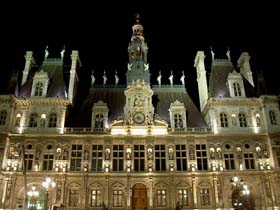 The City Hall at night 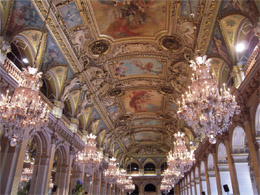