La Grande Arche is a spectacular monument in La Défense business district. In the axis of Arc de Triomphe, it is a pure 20th century replica of Arc de Triomphe on a huge scale. Its roof provides a great view of Grand Paris. Paris monuments.

La Grande Arche is the iconic monument of La Défense business district, west of Paris. A panoramic lift brings you to the roof at 110 meters with a view up to Arc de Triomphe. The roof is open 7 days a week. 10.30am to 6.30pm. Access for disabled people. Ticket price: 15 euros. Locate Grande Arche on Paris map. Paris metro: Grande Arche, line 1, RER A. 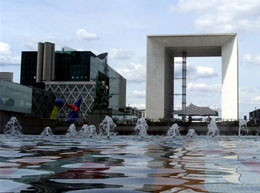 You plan to visit the Grande Arche. You can stay in a hotel near-by. La Défense is a pleasant pedestrian area with easy metro connection to the city. The best hotels are Hilton, Novotel and Renaissance. The choice of restaurants in the district is not great and you should rather go to the city for dinner. Nightlife too is rare. You can also stay in the city. We recommend a hotel near Champs-Elysées, a lively district connected to La Défense by RER A (one metro stop) and metro line 1 (15' ride). 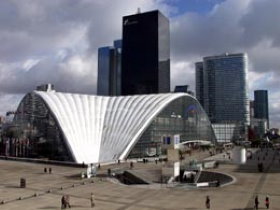 Apartments and hotels near la Grande Arche on the map

The Grande Arche was designed as an infrastructural canopy. Purity in form was the goal of the Architect. The 110 meter long, wide, and tall hypercube is made of concrete and marble. It features reflective glazing on the outside walls. Notre-Dame could fit in the Arche's carved out void.

The massive scale of the Arche is best visible in its atrium, which hosts an amazing stretched Teflon mesh. This portion of the building was an afterthought added to the original project once Architect Paul Andreu took over the project.

The innovative awning allows wind and light to permeate, while shielding visitors from the elements. This seemingly cloud-like structure is fastened by tensioned cables which clutches onto the building’s facade, and whose figure appears alien like among the sharp contours of the Grande Arche. The freestanding, transparent elevator shafts which also occupy the interior quad provides some of the most remarkable views of Paris. This shaft climbs to the uppermost level, establishing a datum that measures a thirty-five story structural phenomenon. 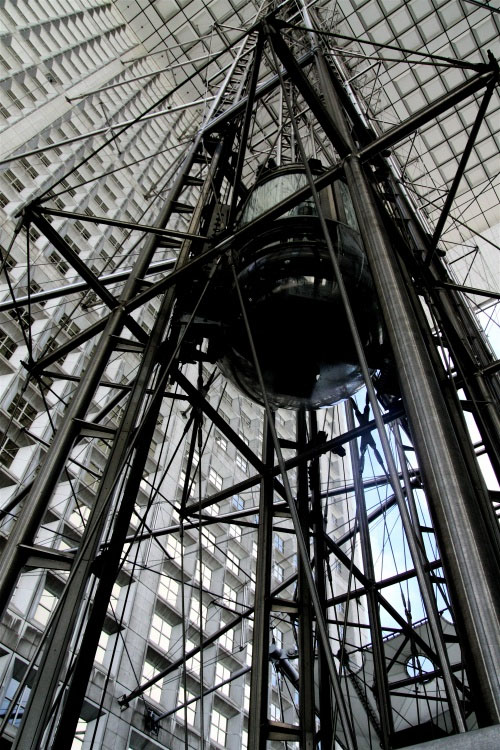 Lift to the roof of Grande Arche

In 1982, Francois Mitterand, the President of France, initiated a national design competition to create a new Arc de Triomphe. This time, the monument was built not to celebrate a military victory, but to celebrate humanity. From all of the competing projects, the design of Danish Architects Johann Otto von Spreckelsen won the competition. The construction of this new Arc de Triomphe began in 1985. Unfortunately, the original architect of the Arche could not finish the monument as he resigned in 1986 before the monument was finish. His work was continued by French Architect Paul Andreu until the completion of the monument in 1989. The company that handled the construction project was Bouygues, the giant French civil engineering company.

The monument itself is meant to be a giant cube ( 108m x 110m x 112m ) projected onto three-dimensional world. Its design was firm yet decorated with elegance of glass and marble frames from Italy. The fragile marble has recently been replaced by granite on most of the surface. 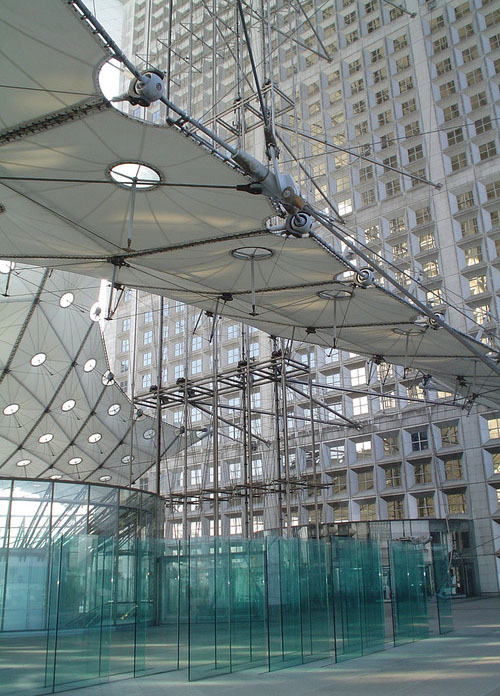 La Grande Arche is a 110 meters high cube. Desiged by Otto van Spreckelsen, it has a pre-stressed concrete frame covered with glass and granite, which has replaced the original white Carrara marble from Italy. The window-like effect of the Grande Arche is enhanced by the shimmering silhouette of its external lifts. ts spectacular architecture was a daring technical achievement in 1989. 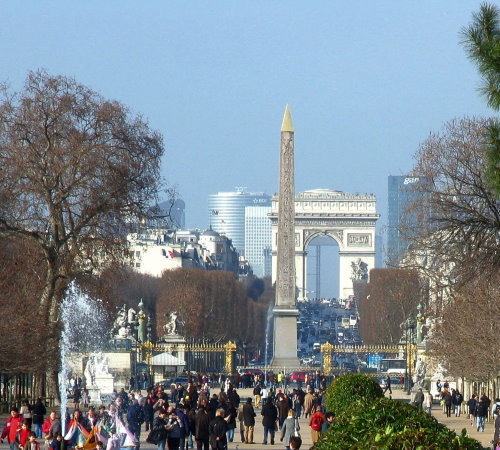