The weather is generally mild. You will not endure Siberian cold nor Arabian heat in the city. Winters tend to be milder than in the past and it rarely snows. As the city is not very far from the Atlantic Ocean and the beaches of Normandy, the weather is unstable and unpredictable. You can never be sure of the weather in advance. Never mind. The city has so much to offer indoor, including many shopping, museums and monuments, that you will manage your time on rainy days. 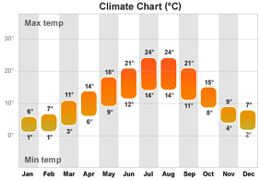 The summer is warm and sunny, sometimes hot. In a big city, summer may not be the most pleasant season. Check temperatures in degree fahrenheit on the chart. It may rain heavily during the summer. The fall has sunny and glorious days with the best light. We love September, the best month. Winter is cold in January and February, although it can sometimes be surprisingly mild. It very rarely snows and the snow does not stay long. Spring is beautiful, when it does not rain too much, which can happen. Parks are gorgeous. 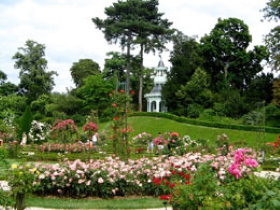 Flowers are best in May, June and September

Most months have moderate rains on average. There is not really a rainy season in the city as in many countries. Most heavy rains occur in December and January, resulting in significant floods. But, rain is quite unpredictable. May and June 2016 were incredibly wet with significant flooding of the quays. May and June 2019 were quite different as we had almost no rain at all. 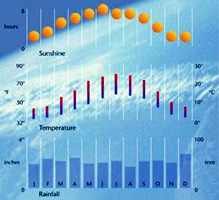 As shows the chart above of millimetres of rain per month in 2019, there is not really a rainy season in Paris. Rain is unpredictable. The blue rectangles are amount of rain per month and the dotted line average monthly rain over the years.

It very rarely snows in the city as the winter weather is milder and the snow quickly melts away. But, the city parks and gardens are incredibly beautiful and quiet after a snowfall. If it snowed during the night, go out and take pictures.

There was more snow in the past. It snowed everyday from 26 to 31 October 1869. In December 1879, the coldest month ever with December 1788, the streets were cluttered with a thickness of 30 to 40 cm. This snow was thrown into the frozen Seine and accumulated to form huge blocks of ice. This lead to a terrible debacle in early January. 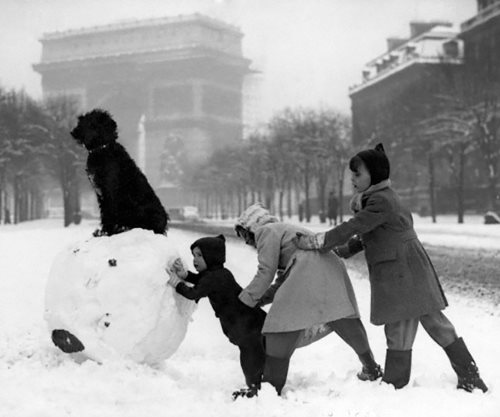 December and January are sometimes very rainy and the lower quays are then flooded. The 1910 flood was the largest known surge of the Seine in Paris after the 1658 flood. It touched most of its valley and caused significant damage to the regional economy in and around the city.

The Seine reached its maximum level of 8.62 meters at the Austerlitz bridge on January 28th. The flood affected 12 arrondissements of the capital and many other towns along the river for several weeks. The rise of the waters occurred in about ten days, and the decrease in 35 days approximately.

The tributaries and confluents of the Seine knew the same fate to different degrees, due to the interdependence of the different hydrological systems. Some suburban cities suffered significant damage. During the flood, the deputies went to the National Assembly by boat. The Zouave bridge Alma, on which the Parisians are used to measure the height of the floods of the Seine, had water to the shoulders. 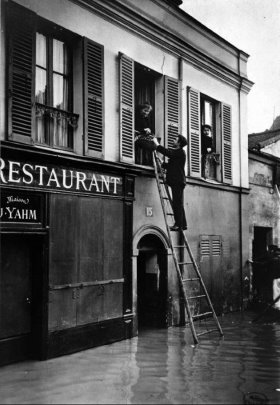