Saint-Denis Cathedral is one of the hidden treasures near Paris. The first gothic cathedral in France, it was a powerful abbey and housed the tombs of French Kings. Saint-Denis is easily reachable by metro line 13. As Notre-Dame is unfortunately closed since the fire, Saint-Denis is a very good alternative to discover the beauty of the gothic cathedrals. Paris monuments.

Saint-Denis Cathedral (also called Saint-Denis Basilica) is one of the most significant monuments of the Paris region, both historically and architecturally. We recommend you to visit this little known treasure easily reachable by metro. 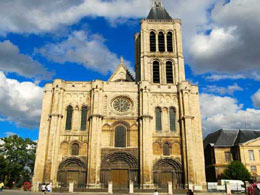 Saint-Denis Cathedral was the first Gothic church ever built. It owes special significance to European history and set the style for Notre-Dame Cathedral in Paris, Notre-Dame in Chartres and Mont Saint-Michel. Its choir, completed in 1144, shows the first use of all of the elements of Gothic architecture. Around 475 St. Genevieve purchased some land and built Saint-Denys de la Chapelle. In 636, on the orders of King Dagobert I, the relics of Saint-Denis, a patron saint of France, were reinterred in the basilica. The basilica became a place of pilgrimage and the burial place of the French Kings with nearly every king from the 10th to the 18th centuries being buried there, as well as many from previous centuries. Saint-Denis soon became the abbey church of a growing monastic complex. In the 12th century, Abbot Suger rebuilt portions of the abbey church using innovative Gothic structural and decorative features. The abbey church became a cathedral in 1966. It is the seat of the Bishop of Saint-Denis. 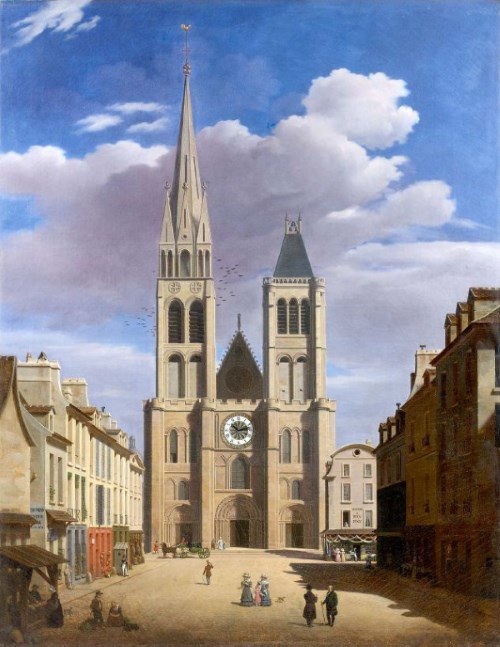 The burial place of kings and queens

Saint-Denis was the burial place of the kings and queens of France from Dagobert (639) to Louis XVIII (1824). Altogether 43 kings, 32 queens and 10 servants to the monarchy were buried there. Featuring over 70 recumbent statues and monumental tombs from the Renaissance, the cathedral contains within its walls the largest collection of funerary sculpture from the 12th to the 16th centuries.

In 1793, the revolutionaries desacrated the tombs in Saint-Denis. They opened them and took out the bodies, which were dumped in two large pits nearby. In the following years the abbey decayed, because in revolutionary France Christianity had been replaced by the Religion of Reason. When the Bourbons returned to power, they ordered a search for the corpses of Louis XVI and Marie Antoinette, which were found on 21 January 1815 and brought to Saint-Denis. The mass-graves were opened in 1817, but it had of course become impossible to distinguish any individuals. The remains were put in a small room in the crypt, behind two marble plates with all their names on them. 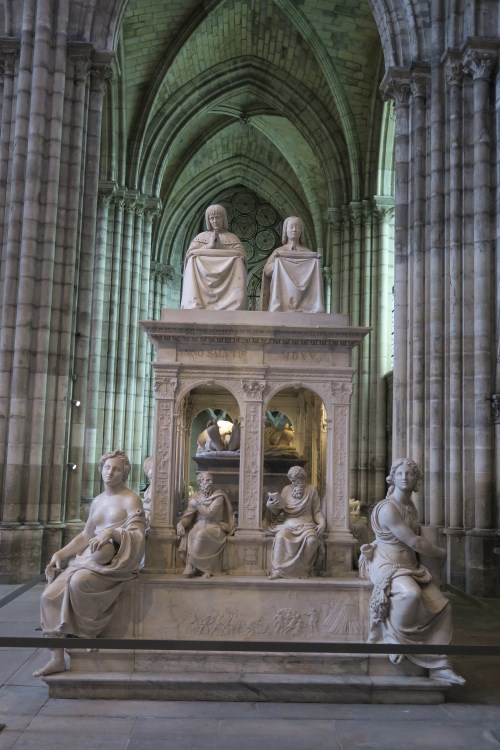 The tomb of Louis XII and Anne de Bretagne

Saint-Denis will draw a lot more attention in the coming ten years. On the initiative of the City of Saint-Denis and with the agreement of the Ministry of Culture and Communication, the 86m high spire of Saint-Denis, dismantled in the nineteenth century will be rebuilt. The spectacular construction site will be visitable during the 10 year project with visits funding part of the work. The operational phase begun with the final agreement of the Ministry in March 2018.

Built at the beginning of the 13th century, the Saint-Denis spire was considered, in its time, as one of the most spectacular works of the Paris region. In the tradition of Romanesque rock arrows, it completed the construction of the western facade of the abbey, begun a few decades earlier by Abbot Suger. Figuring on all the old representations of the abbey, it was spared by the Wars of Religion, as by the Revolution. Following the works commissioned by Napoleon to restore the basilica, it was restored by architect François Debret, in 1837-1838. In the spring of 1846, destabilized by the tornadoes of 1842, 1843 and 1845, the spire had to be carefully dismantled to allow the consolidation of the tower which carried it. It was planned to be reassembled thereafter. 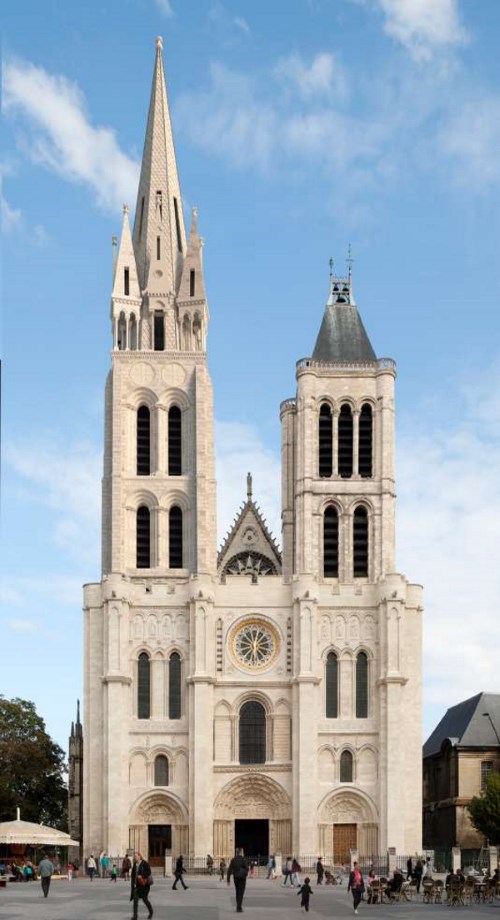 Saint-Denis as it will look with its spire

Saint-Denis Cathedral is close to Stade de France. Take a taxi from one monument to the other. Saint-Denis is a popular town north of Paris. Staying there will be a cheap and different experience. 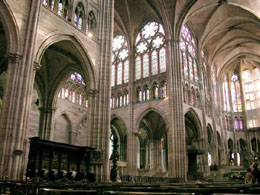 The nave of Saint-Denis Basilica

Abbot Suger, adviser to two kings of France (Louis VI and his son Louis VII), nicknamed the "Father of the Fatherland", marked his time. A man of the Church and formidable businessman, he made the abbey of Saint-Denis the richest religious center in the kingdom. He participated brilliantly in the government of Louis VI and built the town of Vaucresson. He financed the crusade of Louis VII and became regent in his absence. A witty man and a great lover of art, he fully contributed to the glory of the Gothic, by building the superb abbey of Saint-Denis.

From a very modest background, Suger entered the abbey of Saint-Denis as an oblate at the age of ten. He was raised there by the monks in the company of the future Louis VI le Gros. A great bond developped between the two young people who would remain friends until the death of the sovereign. Over the years, Suger's gifts as a mediator and keen business acumen quickly established his reputation. He naturally became the businessman of the abbey, of which he was elected abbot in 1122.

It was during the last years of the reign of Louis VI, from 1130 to 1137, that Suger, designated by his king as "his familiar and his faithful advisor", played a preponderant role in the government. Under his influence, the political power was organized by relying on a modern administration, dedicated to the management of the estates. On this subject, Suger wrote his De administratione sua (Memory of my abbey administration). In this book, he praised his work in Saint-Denis, the principles of which would be applied to all other areas of the kingdom. Louis VI charged his friend and adviser to numerous diplomatic missions to the papacy. As he oversaw the education of the future Louis VII, Suger worked to strengthen royal authority and improve justice. The Court of Capetians was transformed, under its auspices, into a real organ of government. Royal authority was strengthened. The sovereign was henceforth above the barons and feudal lords. He was the State, the supreme justice. Suger skilfully exploited the political image of the king. He would later record this process in a History of Louis le Gros. At the end of his reign, Louis VI could move from Paris to Orleans in peace. In Saint Denis, Abbot Suger worked wonders. In a few years, thanks to his unparalleled management, he quadrupled the abbey's income and became one of the most powerful lords of his time.

In 1137, Louis VII the Younger ascended the throne of France. Quite naturally, the new king, like his Abbot did, called on the services of the essential Suger, whose position and influence would be considerably strengthened. This one, became the favorite adviser of the young sovereign, took part in the Council, supreme organ of the government where one found all the great ones of the kingdom. Under his rule, new towns were created, such as Vaucresson. Favorable to the emancipation of serfs, Suger set an example by creating an original social organization. Between 1132 and 1144, Suger undertoook in Saint-Denis, the construction of a new basilica which was one of the first achievements of nascent Gothic art.

In 1147, Louis VII decided to participate in the second crusade. Suger was not in favor of this adventure, which he considered hasty and expensive. However, he bowed, respectful of the sovereign's decision. Deeply attached to his king, Suger even financed the operation by drawing on the treasury of Saint-Denis as well as his personal fortune. Fully trusting this devoted and competent servant, Louis VII entrusted him with the regency. For two years, Suger managed the affairs of the kingdom very efficiently. He also succeeded in ensuring public order, in thwarting the intrigues of the nobility and in containing the insubordination of part of the clergy. On his return in 1149, Louis VII consecrated these happy results by offering Suger the title of "Father of the Fatherland". The king's faithful adviser died in Saint Denis in 1151. Concerned about the deliverance of the Holy Land, he was then preparing a new expedition, at his expense.

Saint Denis has remained over the past 17 centuries an important figure in Parisian history, even in France, since he brought Christianity to the capital and this religion had a considerable role in the way in which the city developed. His history is also closely linked to that of Montmartre, whose etymology is linked to the tragic end of this missionary bishop ("Mons martyrum").

Saint Gregory of Tours, historian and bishop of Tours, related that around 250, the bishop of Rome sent Denis to Gaul with six other bishops, to bring the Gospel there. Denis went to Lutèce and thus became the first bishop of the city. He was put to death, beheaded, with two of his companions Rustique and Éleuthère, probably under the persecution of Valérien (253-260) on the slopes of the hill which today bears the name of Montmartre. A legend tells that after his beheading, he carried his head from Montmartre to the "vicus Catulliacus", located six kilometers north of Lutèce, which became the city we know as the name of Saint-Denis. He would have been buried where stands the basilica of Saint Denis.

The name of Saint Denis appeared around 520 in the "Life of Saint Geneviève" which testified to the saint's devotion to the martyred bishop. She obtained from the Parisian clergy the erection of a church on his tomb. She often went to a church in the City of which he was the holder. Half a century later, the “Hieronymian Martyrology” mentioned the feast on October 9 of Saint Denis and his companions Eleuthère, the priest, and Rustique, the deacon. Saint Venance Fortunat attested to the spread of his cult to Bordeaux.

In the 7th century, an abbey was founded near the church where the relics of Saint Denis rested. It became prestigious thanks to royal largesse from Dagobert. It contributed to the influence of its patron saint by endowing him with a wonderful legend. From 835, Hilduin, abbot of the monastery, began to propagate in the West a story according to which Denis of Paris would be one and the same character with Dionysius the Areopagite, converted by Saint Paul. As this Dionysius lived in the 1st century, this legend did not hold.

Another legend, more tenacious, appeared around the 5th century. The usual version of the legend is that which appears in the "Lives of the Saints" by Jacques de Voragine (13th century). Here's the gist. Denis, Éleuthère and Rustique were tortured and then condemned to be beheaded in front of the temple of Mercury, at the top of the Butte Montmartre. The soldiers renouncing to go up to the summit executed their victims halfway up the slope (at the level of the current rue Yvonne-le-Tac). Once decapitated, Saint Denis got up, picked up his head and continued to climb the hill, guided by an angel. Then continued his journey to the current city of Saint-Denis where he fell. A noble Christian lady, Catulla, then had him buried in the same place according to Christian rites.