The Fontainebleau Castle is the second most beautiful castle near Paris after Versailles. From François Ier to Napoléon, its history is closely related to the history of France. The huge Fontainebleau forest is great for hiking, horse riding and mountain climbing. There are convenient one day coach tours to Fontainebleau from Paris. Famous places in France.

The simplest way to visit Fontainebleau is a coach tour from Paris. Consider the tour with visits of Fontainebleau and Vaux le Vicomte, another great castle near the city (not in winter).

You come to Paris for a minimum of three days. Visit Fontainebleau Forest and Castle, a Unesco world heritage monument, fifty kilometers south from the city. There are trains from Gare de Lyon station to Fontainebleau. The trip by car takes one to two hours depending on traffic. Stay overnight in Fontainebleau or lovely Moret sur Loing. 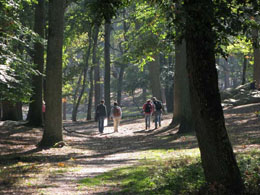 Hiking in Fontainebleau Forest near Paris

History of Fontainebleau near Paris

As the largest royal hunting forest, Fontainebleau has had the favor of the Kings of France since the 16th century. They had there one of their greatest castles alongside Versailles.

François I, the King who bought Mona Lisa from Leonardo Da Vinci, built most of the magnificent Renaissance Castle in the early 16th century. The castle was also a favorite of Emperor Napoléon who resigned there in 1814. Napoléon's throne room is one of the most visited rooms of the castle.

After having welcomed for centuries the kings and queens of France, the castle became the favorite residence of Emperor Napoléon I in early 19th century. The story ended when, defeated by the allies, he bade farewell there to the Imperial Guard before his first exile to the island of Elba in 1814.

The presence of Napoléon can be felt in the only room of the throne still visible in France, in the imperial apartments and at the horseshoe staircase. The Napoléon museum is also a key attraction of the castle. Occupying no less than 15 rooms of King Louis XV wing, it retraces his daily life, and the lives of those close to him, through a series of objects, weapons, ceramics, costumes, historical documents, paintings, sculptures and furniture, linked to the most famous French personality in the world. One of the largest French forests with its 25000 hectares (250 km2), the Fontainebleau Forest, 50 km south of Paris by the A6 freeway, is a favorite of Parisian mountain climbers, who train there on weekends. Its rocky hills make the perfect training ground before mountain climbing in the French Alps.

With its many beautiful trails, the Fontainebleau Forest is also much appreciated by hikers and horse riders. 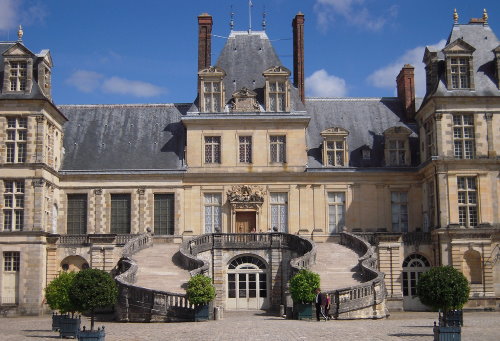 Go to Fontainebleau on your own

By car, take the A6 freeway at Porte d'Orléans in the city. You will then be able to best discover and enjoy the huge Fontainebleau Forest. Avoid rush hour which can be terrible. 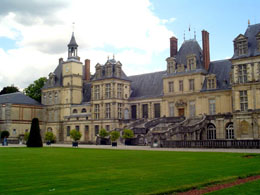 Located 30' from Fontainebleau, the Vaux le Vicomte Castle is another spectacular castle. Its visit can be combined.

We also recommend the Loire Castles, the other great Renaissance castles near Paris. Paris monuments. 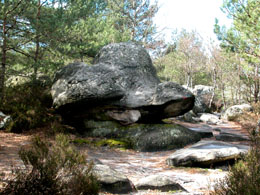