Eiffel Tower facts and history. the Eiffel Tower was the world tallest building from 1889 until 1930. Probably the best known and the most inspiring monument, it is also the world's most visited paid monument. Paris monuments.

The Eiffel Tower - Tour Eiffel in french - is by far the tallest building in Paris. It is a puddle iron lattice monument.

With 7 million visitors in 2018, the Eiffel Tower is also the most visited paid monument in the world. 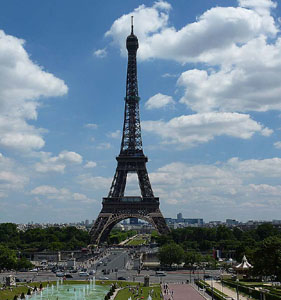 Completed in 1889 for Paris world exhibition to celebrate the progress of technology, the Eiffel Tower was designed and built in just two years by 132 workers and 50 engineers. The Tower was much criticized by Parisians when it was built.

The Eiffel Tower was planned to be demolished in 1909. It was saved at the very last moment as it could be turned into a telecommunication tower. With 7 millon visitors yearly, this iconic Paris monument now fully pays for itself. 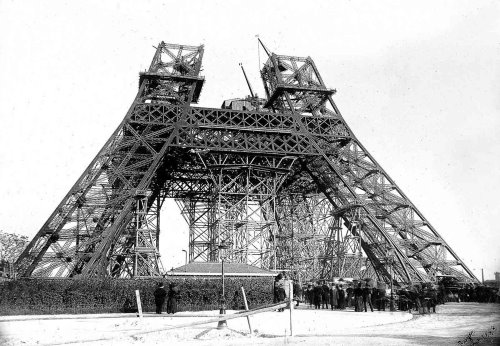 It was not Gustave Eiffel who came up with the idea for this tower which now symbolizes Paris, but two engineers from his team, Émile Nouguier and Maurice Koechlin. Responding to a call for projects launched on the occasion of the Universal Exhibition in Paris in 1889, they proposed a 300 m high tower, based on the same principle as the piles of bridges that the company had built in Douro, Portugal, and Garabit, France. Their project was selected among 107 projects, The construction employed 150 workers, and required 18,000 parts and 2,500,000 rivets. The tower was completed in two years, two months and five days,The project was not unanimous: an open letter to the construction manager was published in the newspaper Le Temps. It was signed by the most famous intellectuals of the time and artists such as Charles Gounod, Alexandre Dumas fils or Guy de Maupassant. Despite the controversy, the tower has enjoyed unabated success. It received 2 million visitors during the Universal Exhibition of 1889. It inspired Apollinaire or Aragon, was painted by Seurat, the Douanier Rousseau or Chagall. It appeared very quickly in the cinema. In advertising, it was associated with fashion, luxury, perfumes because it is in itself the symbol of Paris.

The tower consists of a pyramid with curved faces. 50 engineers and designers took part in its design and executed 5,300 drawings. Gustave Eiffel published some of these drawings. The 18,000 different parts were manufactured in the Eiffel factory in Levallois-Perret, close to the city. Only the assembly was provided on site by 132 workers.

The feet rest on solid foundations, to which they are attached and anchored by strong bolts. To build the foundations, 48,000 m3 of earth must have been moved entirely with a shovel. The excavated material was evacuated by horse-drawn wagons and by steam locomobiles. 14,000 m3 of masonry must have been used. The construction of the pillars on the Champ-de-Mars side did not present any difficulty. On the Seine side, on the other hand, the pillars required compressed air foundations using sheet metal boxes driven 5 m underwater. The deepest foundations of the tower do not exceed 15 m.

From the feet of the tower rise four arches with an opening of 80 m and a height of 80 m, covered with decorations and ornaments representing currencies and the heroes of duty. To assemble the first floor, the uprights must have been placed in a cantilevered inclined position so that they meet the horizontal beams of the first floor. Engineers used hydraulic jacks that ensured the movement of each foot and set up an original scaffolding device topped with sand boxes that emptied to adjust the inclination of the uprights. On the first floor (56 m), a large glazed gallery surrounds the building, forming an esplanade of 4,200 m2, allowing the installation of cafes and restaurants. The floor of the first floor is composed of large hollow tiles or hollow slabs 0.60 to 0.70 in length by 0.20 to 0.25 m in width. These slabs are enclosed between iron rails and sealed in plaster.

On Sunday April 29, 1888, it was a party on the first floor floor. Gustave Eiffel gathered his collaborators, engineers, foremen and workers there, after having made them climb 345 steps to thank them, and announce to the staff that the 2% deduction made on the salary for insurance costs against accidents and care given to patients was now abolished. This removal constituted a large salary increase and was welcomed. The weather was beautiful ; some guests were invited by Mr. Eiffel to a lunch. From this platform, the view of Paris was already exceptional.

At a height of 115 m, there is a second room of around 1000 m2; at the top, a dome with an exterior balcony, from which the view extends almost to infinity. The second floor was raised with the help of cranes which used the elevator path. Organized like a mechanic, this exceptional site did not have the slightest accident. The monument was inaugurated on March 31, 1889. On that day, Gustave Eiffel climbed the 1710 steps of the tower to plant the tricolor at its summit. In his ascent, he was followed by members of the Council of Paris, including Mr. Chautemps, president of the Municipal Council of Paris. The Eiffel Tower remained the tallest building in the world until 1930, when it was supplanted by the Chrysler building (319 m) in New York.

In 1886, architect Jules Bourdais proposed to build a 355 meter tower for the 1889 Paris international exhibition. The massive masonry core was surrounded by galleries and small cast iron columns. A gigantic electric lamp illuminated the whole city. But Jules Bourdais had underestimated the weight of the monument, its instability and the costs. Gustave Eiffel won the competition, the Eiffel Tower was built and became the iconic monument of Paris. Jules Bourdais was forgotten. Imagine Paris with the Bourdais Tower.

In 1905 a local newspaper organised a stair climbing championship at the tower. A M.Forestier won, taking three minutes and 12 seconds to reach the second level.

A few aviators have flown an aircraft through the arches of the tower. In 1926, Leon Collet was killed during an attempt.

The innovative car manufacturer Citroen used the tower as a giant billboard between 1925 and 1934 – the company name was emblazoned on the tower using a quarter of a million light bulbs. This was recorded as the world’s biggest advertisement by the Guinness Book of Records. 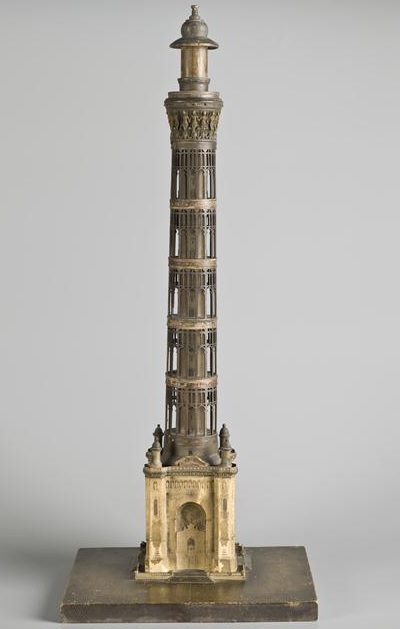 The Tour Bourdais was never built 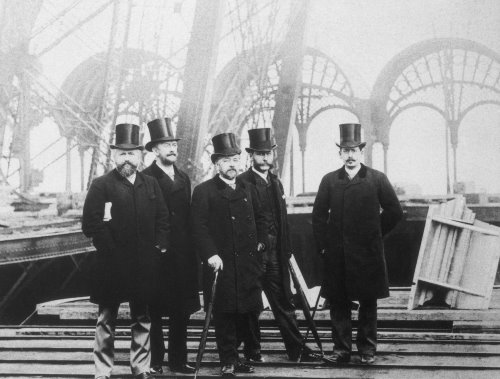 Gustave Eiffel and his team

The Eiffel Tower was a shock to artists when it was built in Paris in 1889. Ever since, this amazing monument kept inspiring many famous writers and painters. 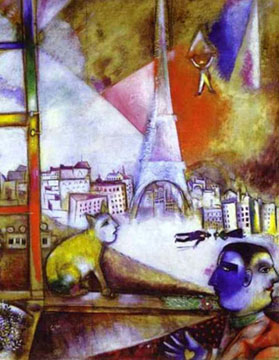