Sacré-Coeur facts: a flagship of Christian devotion to the Holy Virgin, Sacré-Coeur is in Paris, the capital of France, and attracts both tourists and pilgrims. At the top of Montmartre hill, the highest in the city, it competes with the Eiffel Tower as the most visible Paris monument. The plaza and the stairs in front of Sacré-Coeur are animated tourist spots. Paris monuments.

Built between 1873 and 1919, Sacré-Coeur de Montmartre is, behind Notre-Dame Cathedral, one of the best known and the second most visited monument in Paris, the capital of France country. It attracts 10 million tourists and pilgrims each year.

It is the flagship sight of Montmartre, a lovely, hilly and touristic Paris district, famous for its 20th century artistic life.

Sacré-Coeur is a holy place and a place of devotion to the Holy Virgin, animated 24 hours a day by the Benedictines du Sacré-Coeur de Montmartre (web site). Mass times. 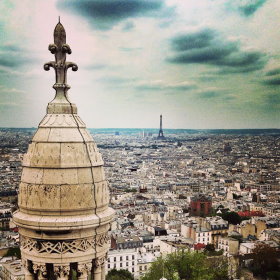 Notre-Dame Cathedral and The Chapel of the Miraculous Medal are the other best known and most visted churches in Paris, the capital of France.

Mont Saint-Michel in Normandy, Chartres Cathedral and Saint-Denis Basilica near Paris, the churches in Lourdes are other world famous churches in France.

They testify that the Catholic Church has played a key role in the history of France as a country since the baptism of King Clovis in 496 by Bishop Rémi in Rheims, the capital of the Champagne region. 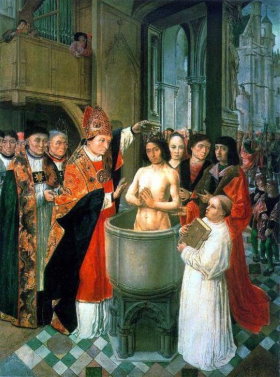 Baptism of King Clovis in 496 by Bishop Rémi

The Basilica is open every day from 6am to 10.30pm. Entrance is free. Reservation is not needed for group visits. Walk up 300 steps to the top of the dome of Sacré-Coeur to enjoy the best 360° view of Paris (ticket price: 6 euros). Access is outside the Basilica on the left. Open every day from 8.30am. to 8pm. (May to September) and 9am. to 5pm. (October to April). The Bell Tower is not open to visitors. Address:

Paris metro: Abbesses station on line 12. Be prepared for a short and nice walk up Montmartre hill and stairs.

Visit the Sacré-Coeur as part of a Montmartre walk or on a Paris guided tour. The animated staircases in front of Sacré-Coeur provide one of the best views of Paris. Book your hotel near Sacré-Coeur, a lovely area for your Paris stay. The visit of Sacré-Coeur will be easy. 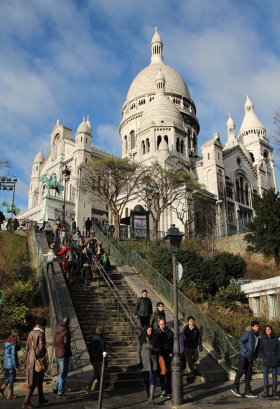 The architecture of Sacré-Coeur is in sharp contrast to the overall Romanesque, Gothic or Baroque style of most Paris churches. Its architecture is inspired by churches such as Saint Sofia in Constantinople and San Marco in Venice.

The exterior travertine stone coming from the Paris region is white. The interior architecture, also in Romano-Byzantine style, gives Sacré-Coeur an atmosphere of harmony and peace. The light and architectural details focus attention on the apse, the place of liturgical celebration and adoration of the Holy Sacrament. The remarkable mosaic was done between 1900 and 1922. The stained glass windows, fitted between 1903 and 1920, have been destroyed by bombing in 1944 and replaced by copies in 1946. The grand organ was built by famous manufacturer Aristide Cavaillé-Coll. 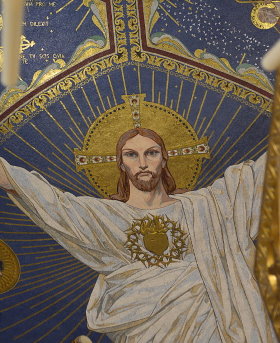 Apartments and hotels near Sacré-Coeur on the map

In 1870 war broke out between France and Germany. France was defeated and partially occupied by German troops.

Alexandre Legentil and Hubert Rohault de Fleury vowed to build a church dedicated to the Sacred Heart as reparation for infidelity and sin which they held responsible for the misfortunes of France. In 1872 the Archbishop of Paris approved the vow and chose Montmartre.

In 1873, he got the French Parliament to pass a law declaring that the Basilica was in the public interest. Architect Paul Abadie was chosen in 1873. The unfinished Sacré-Cœur was inaugurated in 1891. The consecration of the Basilica occurred in 1919, after World War I.

The Sacré-Coeur Basilica construction was opposed by secularists and radicals who tried by all means to stop it. 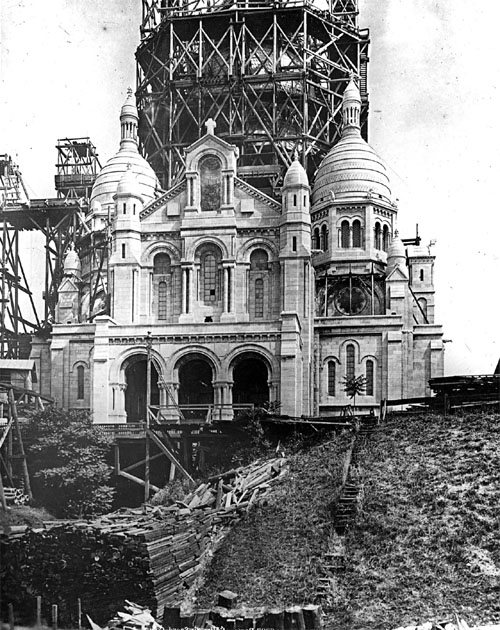 The construction of Sacré-Coeur

Although a flagship Paris landmark, Sacré-Coeur was never painted by the most illustrious painters who lived in Montmartre, such as Van Gogh, Picasso and Renoir. It was nevertheless painted many times by famous painters. Nowadays, many painters in Place du Tertre sell paintings of Sacré-Coeur of their own making. 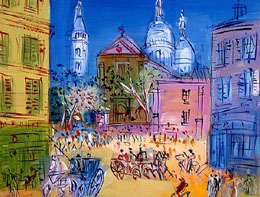