Les Invalides were commissioned by Sun King as a hospital and nursing home for soldiers, which they still are today. They are the most beautiful 17th century monument in Paris. Many visitors come for the the tomb of Emperor Napoléon, transferred in 1840 under their spectacular golden dome. The Army Museum is one of the best in the world. It exhibits an extraordinary collection of armors and other weapons. Its section on the two world wars is quite interesting. Top Paris monuments.

Les Invalides are both one of the top monuments in the City of Lights and a military hospital for veterans. They boast two great churches, Napoléon's tomb and the Army Museum.

Les Invalides can be reached from the Champs-Elysées by crossing the beautiful 1900 Alexandre III bridge and the spacious Esplanade des Invalides (Paris map). A great 10' walk across the Seine river. Les Invalides are also very close to Musée Rodin, one of the best art museums in Paris with its relaxing gardens. You can see Les Invalides on a Paris coach tour. Information. 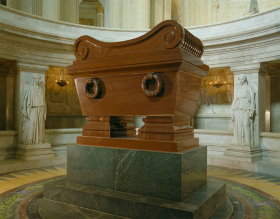 Napoléon's tomb is in Les Invalides since 1840

Les Invalides are open Monday to Sunday from 10am to 6pm all year round, except on January 1st, May 1st and December 25th. Visit the Invalides dome with Napoléon's tomb and the interesting Musée de l'Armée (Army Museum) and its collection of Middle Age armors. The 14 euro admission ticket gives access to the Dome Church, the tomb of Napoléon, the Saint-Louis Cathedral and the Army Museum. Buy your ticket online.Paris metro: Varenne station on line 13. 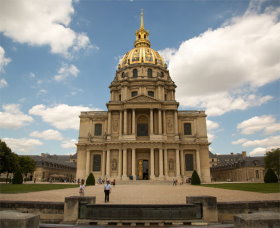 Sun King, the French King who built the Palace of Versailles, staged many wars in Europe. In 1670, he commissioned Les Invalides in Paris, a 13 hectare hospital for wounded soldiers. Jules Hardouin-Mansart, the main architect, also designed the Grand Trianon in Versailles. With their large church topped by a 107 meters high golden dome, their second Saint-Louis church and their rectangular courtyard, Les Invalides are one of the masterpieces of French classical architecture. The ashes of the greatest French military genius of all times, Napoléon, rest under the dome of Les Invalides since 1840 and attract many visitors to Paris. Napoléon's tomb details.

The Main Courtyard of Les Invalides presents an exceptional battery of 60 French classical bronze cannons, tracing 200 years of the history of French field artillery. The richness of its ancient collections is what makes the Army Museum one of the three largest arms museum in the world : war armors and arms from the 13th to the 15th century, medieval swords. The collections related to Napoléon Bonaparte, his armies and his marshals are especially remarkable. The world war presentation exhibits a thousand objects: French and foreign uniforms, objects used by soldiers in daily life, marshal's batons and ceremonial swords, emblems, paintings and elements from personal archives. Documentary films, photographs, maps and architectural models complete the collections. 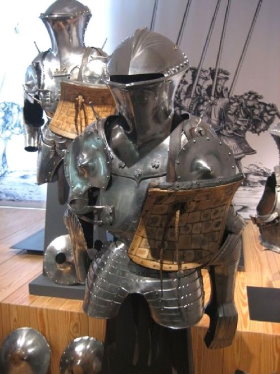 Apartments and hotels near Les Invalides on the map

Located near Les Invalides, Hotel Muguet is also 5 minutes from Musee Rodin and 15 minutes to the Eiffel Tower. It offers modern-style rooms with an LCD TV. All of the rooms at Hotel Muguet have a telephone and a wake up service. Each has a private bathroom with amenities and a hairdryer.

A lift services all of the rooms and some have views of the Eiffel Tower. The hotel serves a daily continental breakfast in the dining room. Other facilities include a 24-hour front desk, a newspaper ordering service and free Wi-Fi access. 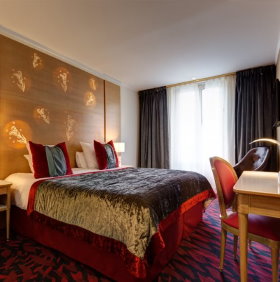 Ticket price : seated, 24 euros, standing, 18 euros. Start of the show at 10.30 pm in July and 10 pm in August.The gates open at 9.30 pm in July, 9 pm in August. Access to the main courtyard is 30 minutes before the start of the show. The ticket office opens at 8,30 pm You can pay by credit card, check or cash. For safety reasons, folding chairs are prohibited. Cushions are allowed. There are no accessible toilets on site except in an emergency.

Headsets in English and in Spanish. 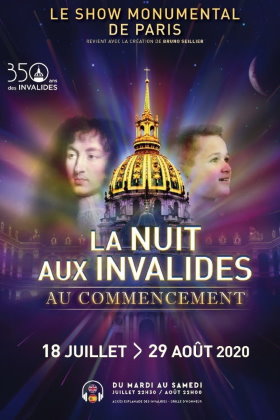 A construction to the glory of the soldiers

It was in 1670 that Sun King decided, on the advice of Louvois, the Minister of War, to found a "Royal Hotel where those who had served his military glory would be received". Indeed, the living conditions of demobilized, able-bodied, disabled or over-aged soldiers have always posed problems for governments. Already in the 12th century, Philippe-Auguste had thought of a hospice for the disabled. As for Saint-Louis, it was for the same reasons that he had the Quinze-Vingt hospice built. Under Henri IV, wounded soldiers were received in certain convents and then in the hospital of Lourcine. Under Louis XIII, it was in Bicêtre.

Louis XIV explained his decision: "We felt that it was no less worthy of our pity than of our justice to rescue from poverty and begging the poor officers and soldiers of our troops who, having aged in the service , or who in past wars, having been crippled, were not only incapable of continuing to render services to us, but also of doing anything in order to be able to live and subsist; and that it was quite reasonable that those who exposed freely their life and lavished their blood for the defense and the supports of this monarchy, which contributed so usefully to the victory of the battles which we gained on our enemies, and which by their vigorous resistance and their generous efforts often reduced them to us ask for peace, enjoy the rest assured for our other subjects and spend the rest of their days in peace. "

For his brave soldiers, as always, Louis XIV thought big. He chose the Grenelle plain, then outside of Paris. It was close to the capital but above all close to the Seine. This was important because at the time, everything was transported by the river. Grenelle had another advantage: healthy air, which would be conducive to the convalescence of the sick. The architect chosen by the King and Louvois was Liberal Bruant. He replaced, in a way, Le Vau, who died the same year.

The plan chosen was inspired by the convent of Escurial in Spain. It is a succession of courtyards on either side of the main building. The architect Liberal Bruant carried out this work with great speed: the military enclosure was completed in three years. The first residents could settle in October 1674. The huge building has its long facade on the esplanade: 195 meters. It is organized around a large arcaded courtyard, built like a two-storey monastic cloister flanked by four secondary courtyards.

A classic architecture, a magnificent dome

The architecture is classic, rather austere, only embellished with dormers in the roof in the form of breastplates. They recall the military function of the establishment, both barracks and hospital. At each end of the building, above the dormer windows, are sculpted groups, balancing and highlighting the central frontispiece, that of the entrance: it is a triumphal arch to the glory of Louis XIV on horseback as a Roman emperor.

The building includes a church whose bell punctuates the regular life of the boarders. Bruant had problems with the chapel. The difficulty was to integrate the church harmoniously while separating, as in convents, the space reserved for boarders and that open to people from outside. Bruant saw all his projects refused by Louvois. Finally, the minister asked Jules Hardouin Mansart to build the church. This young 30-year-old architect had the advantage of being Mansart's nephew and spiritual heir. He skilfully took over Bruant's plans and used his uncle's design for the burial chapel of the Bourbons in Saint-Denis, which had not been built. The long traditional nave of the Saint-Louis des Invalides church would be accessible to soldiers from the main courtyard. To build his magnificent chestnut frame, Bruant found these trees in the nearby forest, on the site of what is now Avenue de Breteuil.

Its interior layout is sober. Behind it, communicating through a large bay closed by mirrors, he erected the sumptuous church from the outside, facing the other way, towards the Grenelle plain and no longer towards the Seine, now on Place Vauban. This church is crowned with a dome considered one of the most beautiful in the world. From the outside, a ground floor and a second floor extend into a smaller and rounder elevation, which supports the famous dome. Columns on either side of the entrance and windows seem to support the whole elevation to the sky. It is of perfect harmony and real beauty. Smaller than the Saint-Louis church, it would be called the Saint-Louis chapel.

The first church was completed in 1679, the dome built by Robert de Cotte was not completed until 1690. The completion of the interior decoration, paintings and sculptures will last until 1706. At this date, the dome, which rises to 107 meters, makes Saint-Louis des Invalides the highest monument in the capital. It is visible from afar with its gilding which required twelve kilos of gold. Some have thought that Louis XIV had for a moment thought of erecting his tomb there. This is the idea that Louis-Philippe used to receive Napoleon's ashes.

Napoleon's tomb is not Louis-Philippe's ebony coffin. Indeed, Napoleon's nephew, Emperor Napoleon III, wanted a Russian porphyry sarcophagus designed by Visconti. Napoleon III paid for the porphyry, for an estimated sum of 200,000 francs. This final tomb, begun in 1843, was solemnly inaugurated under the Second Empire, on April 22, 1861.

But at Les Invalides, it's not just Napoleon's tomb. There is also a small necropolis called the Caveau des Gouverneurs. It contains around forty lead coffins and a few urns. This is where the former governors of Les Invalides rest, but not only that. There are also the chief surgeon of the Grande Armée, Baron Larrey, Rouget de l'Isle, the author of La Marseillaise, Marshals Leclerc and Juin.

A residence, a hospital and a museum

During the time of Louis XIV and during the following reigns, the Hôtel des Invalides, designed for 2,000 soldiers, would have nearly 4,000 residents. They slept four or five in rooms. Only the officers were given a private room. These rooms were upstairs, above four huge dining rooms decorated with war scenes. The residents wore a uniform. Those who wished could work in workshops. They made shoes, tapestries and illuminated books. There was a permanent medical corps and nuns. The hotel had a pharmacy and six infirmaries.

In 1905, the northern half of the building was transformed into an Army museum. The southern part remains dedicated to hospital equipment and housing. The museum houses superb collections of weapons, uniforms and archives. It regularly organizes thematic exhibitions.

As for the hospital function, it is quite remarkable. The care is of high quality and the rehabilitation equipment is exceptional. A swimming pool heated to 35 degrees was built in the basement. It is essential for the healing process of the injured. These services not only receive wounded soldiers on missions but also, sometimes, civilians such as victims of terrorist attacks in recent years. We can cite the case of Philippe Lançon, survivor of the Charlie Hebdo massacre. He spent seven long months which he recounts in his book The Flap. Obviously, in his immense suffering, he appreciated the welcome, the care and the staff, but perhaps also experienced the charm and the beauty of the place. An ensemble that has embodied the history of France for three and a half centuries.