La Conciergerie prison in Paris is forever associated with the martyr of Marie-Antoinette, Princess of Austria and Queen of France, detained there until her 1793 execution in Place de La Concorde during the French revolution. Paris monuments.

History of La Conciergerie in Paris

La Conciergerie is a monument on the banks of the Seine river in Paris. It was part of the Palais de la Cité (picture), the first French royal palace, used from the 10th century until 1358 when the kings moved to Hotel Saint-Pol in Le Marais and Le Louvre. As La Conciergerie was close to the Palace of Justice, it became a prison in 1391. La Conciergerie is famous for its dramatic role during the 1789 Revolution.

The antechamber to the guillotine

During the French Revolution, in 1793 and 1794, 2780 people were sentenced to death and detained in La Conciergerie. They then left in an open cart towards Place de la Concorde where they were beheaded. Marie-Antoinette, Queen of France since 1774 and sister of the King of Austria, was sadly among them.

La Conciergerie deserves a visit for its history and gothic architecture, with two superb halls, built between 1302 and 1313. Its beautiful facade on the Seine river bank is a vibrant legacy of the Middle Ages. 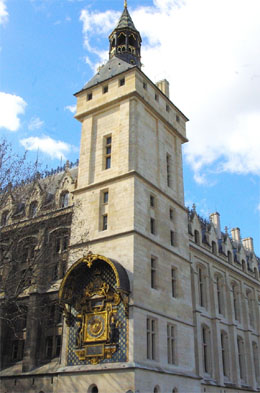 The clock Tower at La Conciergerie 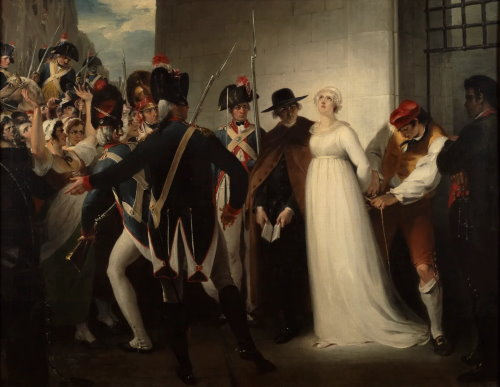 Opening hours: from 10.30am to 6.30pm. Last admission is 45 minutes before closing. A reservation is highly recommended for all visitors. 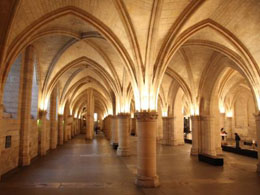 Three towers are left from the medieval castle. The Clock Tower is the tallest one (47 meters). This familiar Paris landmark was built between 1350 and 1353.

The Clock Tower houses the famous 1370 clock. This clock was the first public clock in Paris. See it at the angle of Boulevard du Palais and Quai de l'horloge. 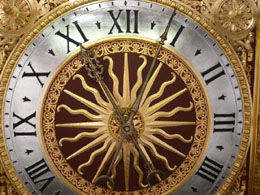 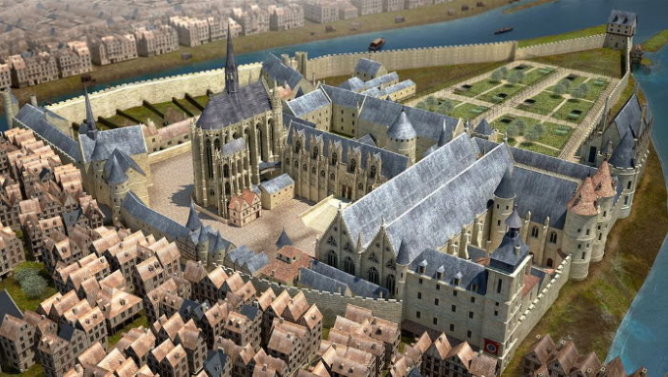 After the conquest of the Gaul by the Romans in 52 BC, a pagan temple was built to the east of Ile de la Cité, where Notre-Dame is located today, while at the west end was built a palace for the governor of Lutece, sent from Rome. The Roman emperor Julien settled there in 357, followed by Valentinian I a few years later. At the fall of the Roman Empire in 476, Gaul was invaded by the Franks, who conquered it in 486. At that time, Paris was not a big capital, not even a big city. The Palais de la Cité became the Parisian residence of the Merovingian kings when they were passing through the city.

At the end of the 10th century, Robert II le Pieux, son of Hugues Capet and second Capetian king, was the first sovereign to settle in the Palais de la Cité permanently. He had the palace rebuilt and the King's Hall became the administrative center of the kingdom. He also built the Saint-Nicolas chapel. To the west of the palace was the king's garden, at the downstream point of the Ile de la Cité. Louis VI le Gros built a tower during the first half of the 12th century which took the name of "Grosse Tour". His son, Louis VII, continued the development of the royal home. In 1163 construction began on Notre-Dame, which lasted nearly two centuries. Philippe Auguste, son of Louis VII, was the first great builder of Paris. The streets of Paris, once paved by the Romans, were covered with a millennium of mud. The king paved the streets around the palace but it is for the enclosure of Philippe Auguste that he is known today. Begun in 1190 and completed in 1215, this 5,100-meter wall encompassed the capital for almost two hundred years. Beyond the western limits of the city was built a keep called the Louvre to protect Paris from a possible English attack. The Palais de la Cité thus lost its role as a fortress.

Under Saint-Louis, the palace experienced significant growth. Having bought the holy relics from Baudouin II in Constantinople, Saint Louis had the Saint-Nicolas chapel razed and had the Sainte-Chapelle built between 1242 and 1248 to house them. The king paid 135,000 pounds for tournaments (about three million euros) for the relics, 100,000 pounds for the manufacture of the silver hunting inlaid with precious stones, intended to receive the relics, and only 40,000 pounds for the construction of the Sainte-Chapelle. The king built a direct access from his apartments to the Sainte-Chapelle. Saint Louis also erected the Reformers' tower, which served as a torture chamber and was later renamed the “Bonbec tower”. Son of Louis IX, Philippe III le Hardi continued the work undertaken by his father and had the palace extended beyond its Gallo-Roman limits. But it was his son Philippe IV le Bel who accomplished the greatest works of the palace since its construction. The King's Hall of Robert the Pious was demolished to make way for the Great Hall. This immense space was decorated with forty-two statues of kings, from the mythical Merovingian king Pharamond to Philippe le Bel. At 63 meters long by 27 meters wide and 8.5 meters high, this hall was one of the largest in Europe. The Great Hall served as the king's bed of justice (a session of Parliament to approve the royal edicts, where the king was lying on a bed of cushions under a canopy) and reception room. The king's guests ate around the long black marble table, a piece of which is on display today in the Salle des Gens d'Armes. The Great Lower Room, or the Hall of Arms, named Salle des Gens d'Armes today, served as a refectory for the two thousand employees. It has survived the ravages of time and the many modifications to the building, today it is the entrance hall of the Conciergerie. To the north, "chambers on the water" were built, including the Grand’Chambre, where the Parliament of Paris sat. Philippe le Bel also reinforced the towers to the north with, to the east of the Bonbec tower, the Argent tower and the Caesar tower. The three sons of Philippe le Bel reigned successively under the names of Louis X le Hutin, Philippe V le Long and Charles IV le Bel. When the latter died without a male heir, the Capetian dynasty died out and his cousin, Philippe VI, rose to the throne, establishing the Valois dynasty. The son of Philippe VI, Jean II le Bon, continued the work started by his great uncle, Philippe IV. He finished the kitchens north of the Great Lower Hall and built a watchtower at the northeast end of the palace.

Charles V, son of John II, became regent of the kingdom during his father's captivity in London. On February 22, 1358, the provost of the Paris merchants Etienne Marcel, trying to obtain reforms from the dolphin Charles before approving the payment of a ransom to the English, entered the palace with his men, who killed the marshals of Champagne and Normandy. This act ended the four centuries when the city palace played a central role in state affairs. As early as 1360, the dolphin left the Ile de la Cité to settle in more secure residences: the Louvre, the Hôtel Saint-Pol and the Château de Vincennes. He built a new wall on the right bank, called the enclosure of Charles V, as well as the Bastille. The new guardian of the Palace of the City was called the concierge and all the buildings under his charge were now called the Conciergerie. Charles V added to the Conciergerie one of the most beautiful objects in the city, which still adorns the corner of the Boulevard du Palais and the Quai de l'Horloge: in 1370, the watchtower of Jean le Bon was equipped with the first public clock in Paris. The watchtower became the Clock Tower. Although the palace continued to receive royal festivals and to house the Parliament, the place vacated by the royal family was reconverted. In 1381, under Charles VI, the ground floor of the royal dwelling became a prison, receiving the prisoners of the Parliament hitherto kept in the prison of Châtelet. Most of the cells were built in the northern part of the Conciergerie.