The Paris Mosque has been offered by France to honor the 70 000 muslim soldiers who died during World War One. Now that many muslims live in France, the mosque is the best known in the country and is very influential. Paris monuments.

A beautiful monument made of reinforced concrete, Paris Mosque is the testimony of the 150 year long presence of the muslim faith in Paris and France.

Paris Mosque is at the same time a peaceful and beautiful monument, a place of worhship, a place of study (Institut Musulman) and an influential voice in french society. 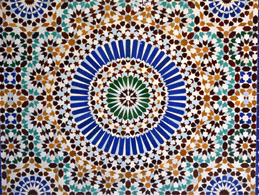 Decorated with mosaics, wood carvings and wrought iron from Morocco, Paris Mosque is an active place of worship for the many Parisians of North African origin, especially on Friday, the Muslim holy day, and during the holy month of Ramadan. In Paris Mosque, you can visit the patio, the gardens and a number of rooms.

Paris Mosque has an oriental restaurant, a lovely tea room and a hamman. Paris Mosque tearoom and restaurant are open everyday from 9am to 12pm. Check them on web site. 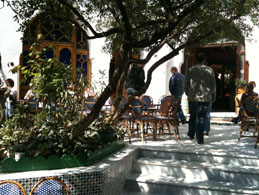 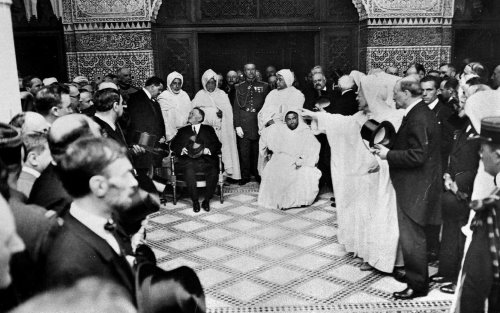 Inauguration of Paris Mosque in 1926
Booking.com

Paris Mosque apartments and hotels on the map

To honor the 70 000 muslim soldiers who died during World War One, the French government decided in 1920 to finance the construction of a mosque, the first in France. Paris Mosque was inaugurated by the French President and the Sultan of Marocco in 1926.

Paris Mosque is inspired by El-Qaraouiyyin Mosque in Fes, Morocco. Paris Mosque 33 meters minaret is a replica of the minaret of Zitouna Mosque, Tunisia. 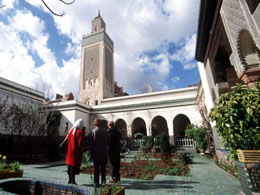 There was a crowd this Thursday, July 15, 1926 in the 5th arrondissement. Local residents, onlookers: many wanted to attend the inauguration of the Great Mosque of Paris. The very formal event scheduled for the afternoon aroused curiosity. The official religious consecration took place in the presence of the President of the Republic; Gaston Doumergue alongside the Moroccan Sheik Moulay Youssef surrounded by several high-ranking French and Muslim personalities, diplomatic representations of Persia, Turkey, the Caucasus and Afghanistan. The project for a mosque in Paris was old, but it became very concrete the day after the Battle of Verdun. “In 1916 in the Meuse, 70,000 Muslims fell with arms in hand (out of 300,000 victims for the French side alone). Public opinion then considered that the nation has just contracted a debt vis-à-vis these very severely tested Muslim populations, ”recalls Dalil Boubakeur, the rector of the Mosque.

It took four years to build the huge religious edifice. During the laying of the first stone, on October 19, 1922, Marshal Lyautey's speech took on lyrical flights. "When the minaret that you are going to build is erected, it will only rise towards the beautiful sky of Ile-de-France one more prayer of which the Catholic towers of Notre-Dame will not be jealous", proclaimed the man who worked hard for the construction of the building. The mayor of Paris was involved in this project since it had ceded the land where the mosque would be erected, where the Pitié hospital was located. The place of worship would be financed by the State (despite the law of separation of Church and State of 1905) to the tune of 500,000 francs. The budget would be supplemented by donations from Muslim countries and the faithful. On July 16, the day after the inauguration, “le Petit Journal” and “le Petit Parisien” praised the beauty of the place, presented as “an incomparable oriental vision, straight out of a play from a beautiful tale of the Thousand and one nights ”,“ a monument whose brilliance does not concede to the most beautiful mosques of the Orient ”. It is the architect Maurice Mantout, born in Algiers, who imagined the Hispano-Moorish building. Of the 7,500 m2, more than 3,500 are reserved for Arab gardens. A 33-meter minaret dominates these green spaces, patios and other paths tiled with multicolored mosaics. The buildings include a conference room, a library, a prayer room and various annexes to which are added the domes of the hammam and the courtyards of the Moorish café. The site is furnished thanks to generous donors such as King Fouad of Egypt and the Bey of Tunis who donated various precious carpets, expertly carved chandeliers, brass, but also furniture inlaid with mother-of-pearl and a magnificent oratory pulpit.