Paris nightlife is most vibrant in a few districts. Le Marais and adjacent Les Halles district are now the most lively districts at night. Saint-Germain-des-Prés, Bastille, Champs-Elysées, Montmartre, Montparnasse are top nightlife districts.

These districts are animated at night with Parisians in the street late into the night.

The nightlife icons below are selected among the best cabarets, bars and nightclubs. 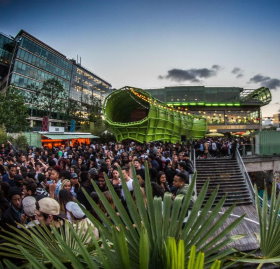 Wanderlust nightclub is on the quays

Nightlife in Paris can be romantic

The magical illuminations, especially along the Seine river banks and in Champs-Elysées, literally transform the City of Lights and turn it into the ultimate romantic city at night. They are the greatest in December for the Christmas season.

The Seine dinner cruise is a perfect combination of a good dinner and relaxing sightseeing, including the Eiffel Tower, the Louvre Palace and Notre-Dame Cathedral. It is the classic and romantic introduction to the city at night. Information.

Walking on the lower quays of the Seine river at night, specially on the left bank quays in between Musée d'Orsay and Pont Alexandre III, and having a drink or a dinner in the many bars and restaurants there is great too. Information. 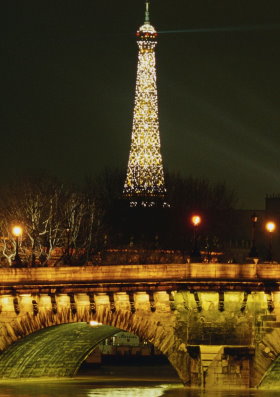 A corner of Latin America in the heart of Bastille district. Drinks, food, atmosphere. The 3,000 m2 venue has four levels. There are many lively bars and restaurants in rue de Lappe and rue Keller near-by. Locate Pachamama on Paris map.

The most scenic Paris bar

From the outside, the hotel presents a classical facade lining a busy street adjacent to Gare Saint-Lazare. Nothing remarkable to stop the passer-by. The inside is totally unexpected. The spectacular and quiet 14 meter high Grand Salon is turned into a bar with good cocktails and service.

Built in 1889 for the Universal Exhibition, the hotel immediatly stood out as an important, refined and modern Parisian high place. Spread over 6 floors and served by 3 lifts, its 500 rooms were equipped with electricity and telephone. It is certainly a good idea to stay at the hotel as the location is quite central, near the Opéra Garnier and the department stores. Information and booking.

The hotel features a magnificent bar in Grand Salon. This luxurious 14m high masterpiece of the hotel is listed as a historical monument. It is a sophisticated place for guests to mingle, connect, sip and savour a cocktail.

Probably the best and most famous Jazz club in town, located in the lively Chatelet Les Halles and Centre Pompidou district. Duc des Lombards has a restaurant. There are many bars and restaurants with music in and around rue des Lombards including Australian Cafe Oz. Web site. Locate Duc des Lombards on Paris map.

Amazing nightclub located inside 1900 Alexandre III bridge. Not far from Champs-Elysées, one of the city's most lively nightlife districts. You may be filtered. Locate Showcase on Paris map.

The Seine dinner cruise is a must of Paris nightlife.

Admire the illuminated monuments along the Seine and the bridges of Paris that lie across it. From the boat's large bay windows, see the Musée d'Orsay, Notre-Dame Cathedral, the Conciergerie and the Louvre, possibly the illuminated Eiffel Tower as the boat passes by. In the boat's cozy and intimate surroundings, enjoy a romantic or relaxed dinner in a warm atmosphere. Savor a traditional French meal prepared with seasonal produce. 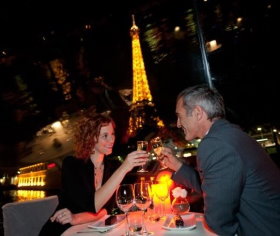 Combine Paris illuminations and a cabaret show on a nightlife tour. There are a combination of nightlife evenings in the city including the Moulin Rouge show. Information.

The Crazy Horse, the city's most avant-garde cabaret, has dedicated itself, since 1951, to the creative vision of celebrating the female body. This elegant and sensual experience puts these sophisticated dancers into the spotlight, making the heads turn around. 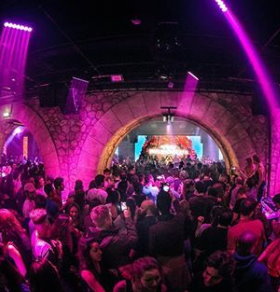 Moulin Rouge is the most famous cabaret in Montmartre. Opened in 1889, it is ever since the model of all cabarets around the world. See Féerie, the spectacular ongoing show. A troupe of 80 artists, including 60 Doriss Girls recruited world-wide, 1000 costumes of feathers, rhinestones and sequins, made in the most famous Parisian workshops, sumptuous sets in shimmering colors, uniquely designed by Italian artists, outstanding international acts, and a giant aquarium; all of this performed to original music recorded by 80 musicians and 60 chorus singers. There are five scenes : the Moulin Rouge today and yesterday, the pirates, au cirque, the Moulin Rouge from 1900 to today,international acts. There are two shows everyday of the year, the fist one at 9pm, the second one at 11pm. There are great combinations of nightlife evenings in the city including the Moulin Rouge show. Information. 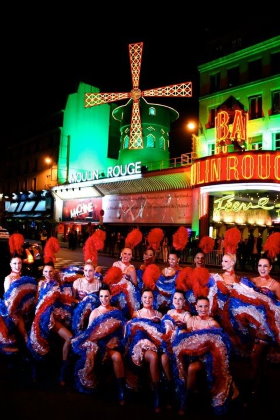 A legendary cabaret that exalts femininity, Crazy Horse was founded in 1951 by Alain Bernardin, an avant-garde artist. This insatiable admirer of women put creation and woman at the center of his cabaret. This resulted in a unique signature, where the perfect bodies of the dancers are clothed in subtle lighting effects.

With the ongoing show, "Totally Crazy", the glamor, daring, impertinence that are the signature of Crazy Horse are showcased into an immersive format. The audience is invited to experience fabulous moments of complicity and sharing around iconic acts that have contributed to the Crazy Horse legend. Show time. Sunday to Friday : 8:15pm. 10:45pm . Saturday : 7pm, 9:30pm, 11:45pm.Crazy Horse on the map. 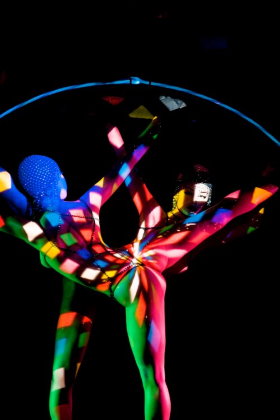 Cinema and music in Paris

Cinema is thriving with 430 viewing rooms in town showing movies in French and in English. La Géode hemispheric movie theater and Le Grand Rex with its 2700 seats are iconic movie theaters. The Cinémathèque is a gold mine for cinema lovers. Cinemas in Paris.

Concerts are a great alternative for an evening in the City of Lights. There are many concerts of all kinds everyday. 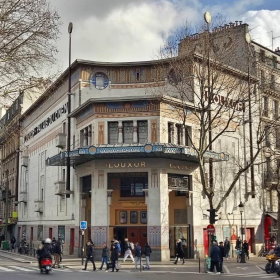