Montparnasse is a famous Paris district thanks to its rich artistic history. Dominated by the imposing Tour Montparnasse, it is still a lively district today with famous brasseries and many theaters. The Tour Montparnasse is the tallest skyscraper in the city. Its top platform provides a spectacular view of the Eiffel Tower and of the whole city. Places to visit in Paris.

Montparnasse district today, at the southern end of the Left Bank, is first of all a train station to Brittany and Bordeaux, the highest skyscraper in town, the Tour Montparnasse, a nightlife district, with cinemas, theaters, restaurants and bars, and a significant portion of Paris's history in early 20th century.

Few Parisians would easily define the boundaries of the district. Boulevard Montparnasse with its brasseries, rue de la Gaité with theaters, restaurants and bars are the core of the district. The catacombs are at the edge of it. 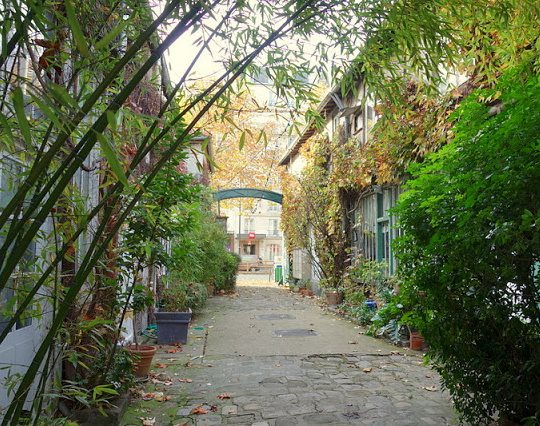 When the construction project appeared in he 1960ies, the Tour Montparnasse was much criticized. The Montparnasse Tower would be a huge expense and not integrate easily into the Parisian landscape. The project nevertheless went through thanks to the support of President Georges Pompidou. The construction began in 1969 and ended in 1973, supervised by architects Jean Saubot, Eugène Beaudouin, Urbain Cassan and Louis de Hoÿm de Marien.

The 56 floors tower is 210 meters high and leans on sixty concrete pillars sinking to 70 meters into the ground. The tower now houses 5,000 daily employees and welcomes each year about 1.2 million visitors for its panoramic view of Paris.

Critics still say that this is the best view of Paris as it is the only one from where the tower is not visible. 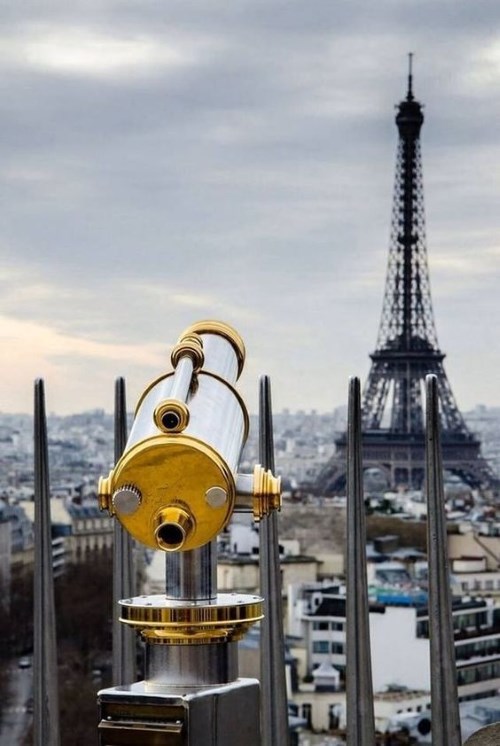 The view from Tour Montparnasse platform

A la villa des artistes is located in the very heart of the artistic Montparnasse.Each stylish guest room is decorated in a contemporary style and equipped with satellite TV and a private bathroom. A breakfast buffet is served daily in the conservatory which opens onto the garden. Guests are also invited to relax in the bar. The hotel provides a 24-hour reception with a tour desk and a ticket service. 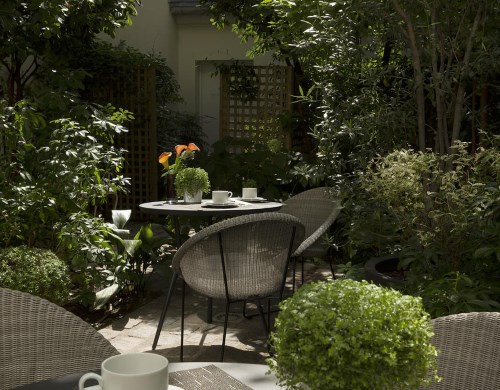 Apartments and hotels in Montparnasse on the map

In the 18th century, students recited poems at the foot of an artificial hillock of rock rubble from the catacombs, a near-by network of underground galleries. Ironically, they decided to baptize this mound "Mount Parnassus", named after the one celebrated by Greek poets. In early 20th century, many Bretons driven out of their region by poverty arrived by train at Montparnasse station, the heart of the district, and settled near-by. At this time too, many artists from around the world, including Guillaume Appolinaire, Ernest Hemingway, Pablo Picasso and Marc Chagall came to take refuge there. The bohemian era of Montparnasse culminated in the period between the two world wars. It was near Montparnasse that Lenin prepared the "big night" and that Trotsky set his plans to stop Stalin and his revolution. Until the 30s, the Vavin crossroads and its surroundings were the scene of an extraordinary artistic, intellectual and festive bubbling. Artists and intellectuals convened in La Rotonde, le Dome, le Select and La Coupole brasseries. All this helped to make Paris a true intellectual capital. During the twenties, many Americans fleeing the prohibition came to settle in Montparnasse and stayed there until the second world war. In the 60s and 70s, the neighborhood was deeply modified by the new train station and the Tour Montparnasse. Paris history facts. 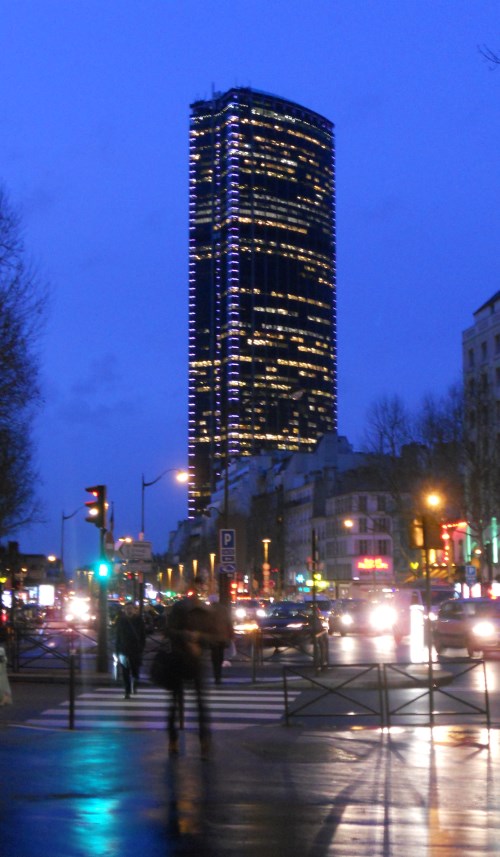 Rue Blomet has played a big role in the artistic history of Montparnasse. 45, rue Blomet, a small park replaced the dilapidated workshops where Rodin worked in 1877.

Joan Miró, a young painter from Spain, lived there between 1921 and 1926. This is where André Masson and Robert Desnos introduced him in the artistic and literary circles of the time, especially with the surrealist group of Rue Blomet, including André Masson, Max Jacob, Antonin Artaud, Dubuffet and Leiris. A sculpture of the Catalan, l'Oiseau lunaire, installed at the bottom of the square, gave its name to this new green space. Miró had offered it to the City of Paris in memory of his years there and in memory of his friend Robert Desnos. The statue is provocative and futuristic.

You might think it's a bull or a cow. It looks like a rhinoceros but it's a bird. The lunar bird has a big head with two big ears. We can think that on his head there is the moon or something that looks like a boat. He has bulging eyes and a big beak. He has a big chin. One could also think that on his head there are horns. This bird has two large legs and two small wings. 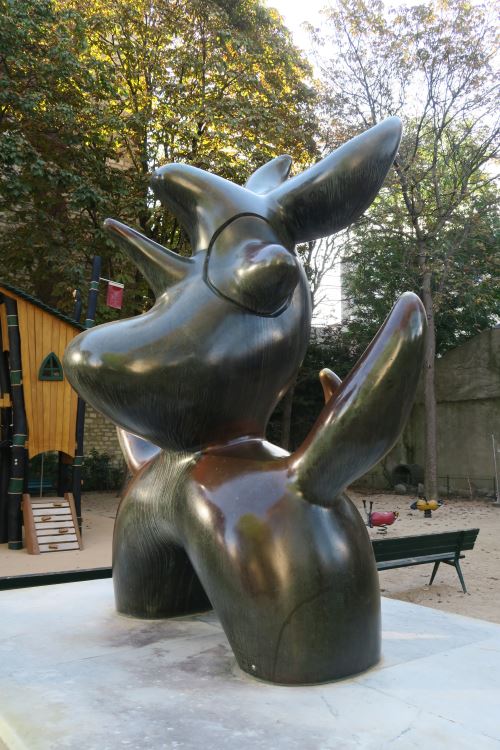 La Ruche was founded in Montparnasse in 1902 by the sculptor Alfred Boucher, from elements of the 1900 world exhibition, on a land of 4033 m2 that he acquired in 1900.

La Ruche was created to help young artists without resources. Renowned future artists have benefited from this place such as Brancusi, Chagall, Leger, Marie Laurencin, Modigliani, Soutine, Zadkine. The name La Ruche, the hive in French, comes from Boucher himself, who considered the artists buzzing with creativity like the bees of a huge hive. In 1905 the Ruche had 110 workshops. La Ruche was comparable to the Bateau-Lavoir of Montmartre. After World War One, it supplanted the latter by it artistic activities.

Faithful to its vocation, La Ruche has been restored. It now hosts fifty artists and stages art exhibitions open to the public.

The famous Le Select, Le Dome, La Rotonde and La Closerie des Lilas brasseries opened before World War One. La Coupole opened in 1927. From the early 1900ies until World War, many famous artists and writers were patrons including Pablo Picasso, Amadeo Modigiani, and Ernest Hemingway. They are still in operation. We recommend La Closerie des Lilas and Le Select for a drink. La Coupole is affordable and the most beautiful Art Déco restaurant in Paris. 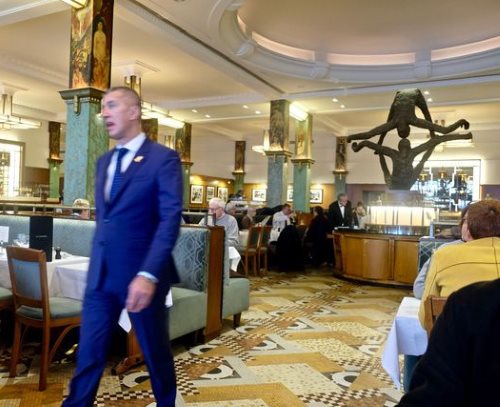 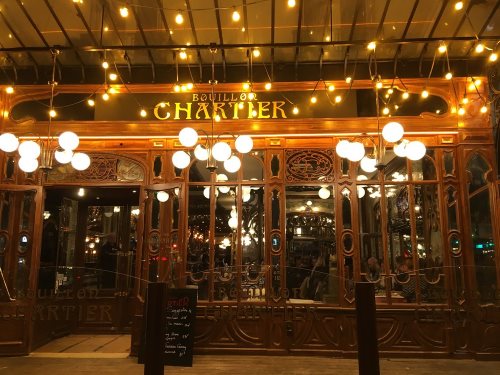 After becoming interested in decorative arts by founding a firm of wallpapers, Henri Sauvage (1873-1932) began his career as an architect building houses. He is the author of the famous Villa Majorelle in Nancy (1899), "total artwork" in the purest Art Nouveau style. Luxury apartment buildings and cheap homes make up the bulk of his Paris production from 1900, when he joined Charles Sarazin. Continuing the hygienist reflections of the time on sunshine and ventilation of housing, Henri Sauvage developped an ingenious system of stepped buildings. The building that best illustrates this concept is the building of 26 rue Vavin in Montparnasse designed in 1912 and made famous by white ceramic tiles. Henri Sauvage is also at the origin in Paris of the swimming, rue des Amiraux (1925), the Studio-Building of rue La Fontaine (1926) and the enlargement of the stores of the Samaritaine with Frantz Jourdain ( 1926); achievements of great modernity, for which the architect has arrived with a minimum of architectural means to a great formal elegance. 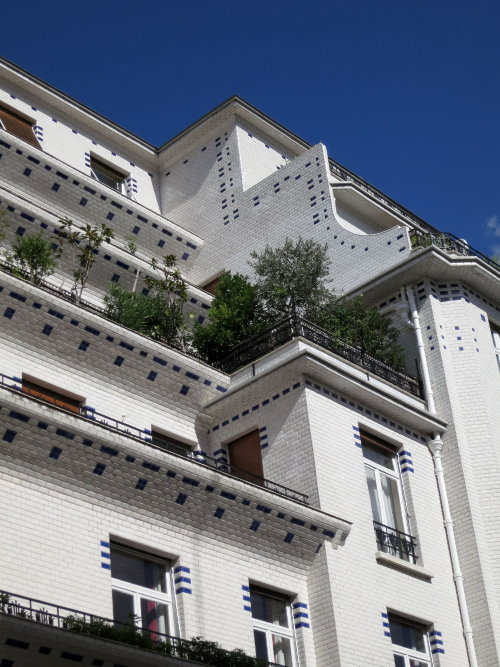 On Oct. 22, 1895, the express train from Granville in Normandy to Paris was running late. Hoping to arrive on time, the driver increased the speed of the steam locomotive, which was carrying 131 passengers. As it entered Montparnasse station, the train was traveling approximately 25 to 37 miles per hour. The air brake either failed or was applied too late, and the conductor was too preoccupied with paperwork to throw the hand brake in time. The train crashed through the buffers at the end of the track, crossed the 100-foot concourse and burst through the wall of the station, tumbling onto the street below. A woman on the sidewalk who was minding her husband's newsstand was killed by falling masonry. Five people on board the train were injured. For four days, the train stood intact outside the station, drawing crowds of curious onlookers. The driver was fined 50 francs. 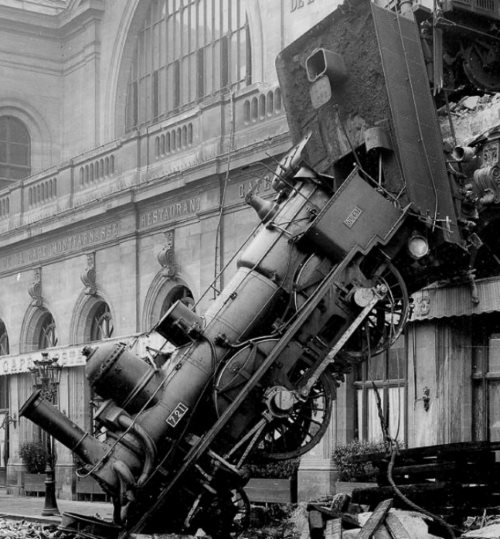 The Nouvelle AOM, the agency specially set up by the five French architects Franklin Azzi, Frédéric Chartier and Pascale Dalix and Mathurin Hardel and Cyrille Le Bihan, was named the winner on September 19, 2017 of the competition launched by the co-owners of the Parisian building. By 2024, the Tour Montparnasse promises to become clearer, greener, more open to Parisians and less greedy for energy.

At the foot of the transformed Tour Montparnasse, there will be a central street lined with wooden buildings housing shops, offices, hotel, accommodation, restaurants and cultural facilities, designed by English architect Richard Rogers. All around, pedestrian spaces will mingle with one of these "urban forests" that will change the city. The project will be fully completed in 2030.