Montmartre, the last village in Paris, was made famous by Picasso, Van Gogh, Renoir and Monet who lived there. The Moulin Rouge, Sacré-Coeur Basilica and Place du Tertre are Montmartre top sights. The 6 top places to visit in Paris.

Topped by the Sacré-Coeur Basilica, Montmartre is the highest hill in the City of Lights at 128 meters. Rural until 1900, Montmartre became famous in the late 19th and early 20th centuries with the arrival of pennyless artists such as Auguste Renoir, Vincent Van Gogh and Pablo Picasso.

In spite of the affluence of tourists from all over the world, most Montmartre streets, almost free of car traffic, keep their village-like atmosphere, which set them apart in busy Paris.

The Sacré-Coeur is the most famous Montmartre sight and a flagship Paris monument. It is also a vibrant 24/24 catholic church. The oldest church in Paris, Saint-Pierre de Montmartre near Sacré-Coeur was built in 1147. It was the church of the prestigious Montmartre Abbey until the revolution in 1790.

Visit Montmartre on a coach tour or spend an evening there enjoying a musical dinner and a Moulin Rouge show. Information and booking.

Montmartre is very crowded during weekends. Go there early on weekdays. To best appreciate Montmartre, choose your hotel near Rue des Abbesses (Paris map), a lovely shopping street and the heart of Montmartre Parisians love. Find there in mostly pedestrian streets the Parisian mix of small fashion stores, food stores, restaurants and bars.

Located in Montmartre, Timhotel Montmartre provides rooms with free Wi-Fi access, flat-screen TVs and private bathrooms. A buffet breakfast is served daily at the Timhotel Montmartre. The hotel also provides a 24-hour reception, where guests can request hairdryers and ironing facilities. The Timhotel Montmartre is a 5-minute walk from the Sacré-Coeur Basilica, the Moulin Rouge and the Dali Museum. It is 100 m from Abbesses Metro Station, which provides direct access to Montparnasse. 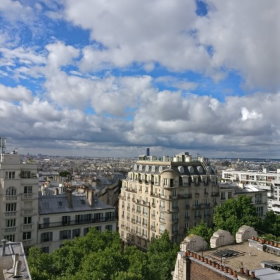 View from Timhotel in Montmartre

As all top tourist spots, Montmartre has many bars and restaurants, not all of them good value for money. 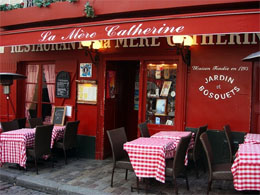 The Moulin Rouge, the most famous cabaret in the world, opened in 1889 at the foot of Montmartre. It became successful immediately thanks to its legendary dancers and singers who were immortalized by Toulouse Lautrec.

Information on Paris by night tours including Moulin Rouge. 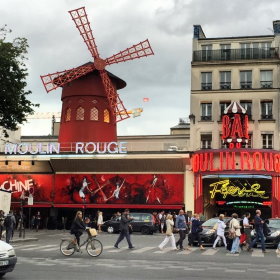 The Lapin Agile was bought in the early twentieth century by the cabaret singer Aristide Bruant. The cabaret became a favorite spot for struggling artists and writers, including Picasso, Modigliani, Apollinaire, and Utrillo.

Today, traditional French songs, chansons by Piaf and Brassens, Paris songs are sang with the public in the intimate and no thrill cabaret room with no audio system. Four hour of pure delight. 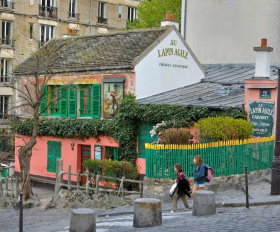 The artists in Place du Tertre are ready to sketch out your face, a nice souvenir of Paris. They remind us of the penniless artists, Renoir, Monet, Van Gogh, Picasso, who lived in Montmartre in late 19th / early 20th centuries. Many of them, including Pablo Picasso and Amadeo Modigliani lived in Bateau Lavoir, which can still be seen today. The Moulin de La Galette, then a ballroom, was frequently painted. Montmartre inspired many movies like Amelie Poulain which made famous the Café des deux Moulins, 15, rue Lepic, and maison Collignon which was located 56, rue des Trois Frères. 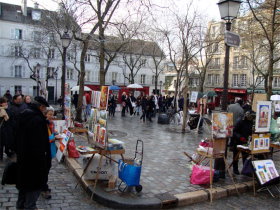 The love story between painters and Montmartre is ancient. In 1820, Horace Vernet and Théodore Géricault resided close-by in rue des Martyrs. Jean-Baptiste Camille Corot was one of the first to settle in Montmartre around 1830. He painted there one of his major works, the Moulin de la Galette, announcing the Impressionist movement. Around 1850, independent artists, led by Edouard Manet, met regularly in Montmartre, at the café Guerbois avenue de Clichy. Frédéric Bazille, Pierre-Auguste Renoir, and Claude Monet, who will later settle in Giverny, without forgetting Pauk Cézanne, Edgar Degas or Camille Pissaro, came to talk about painting, to distract themselves or to remake the world in a feverish atmosphere. After the War of 1870 and the Commune, the Café de la nouvelle Athènes, 9, place Pigalle, became the new meeting place for painters. In 1876, Paul Renoir moved into an old house, 12 rue Cortot. Then came the turn of Vincent Van Gogh, who was influenced by other talented artists such as Paul Gauguin, taking a new look at light in Montmartre. Henri de Toulouse-Lautrec, the soul of Montmartre, rubbed shoulders with colorful characters like the charming dancer called La Goulue, or Valentin the Boneless. The Belle Époque was a time of cultural excitement and artistic fever. Pablo Picasso fell in love with Montmartre. It was there that he set down his brushes once in Paris. In 1912, he moved to rue Ravignon, at number 13. His house built of planks was called the Bateau-Lavoir. He painted there in particular "Les Demoiselles d'Avignon".

Formerly a ballroom and piano factory, Bateau Lavoir was divided into twenty small workshops in 1889. Distributed along a corridor, small rooms were linked without heating and with a single point of water. The name of the place was found by poet Max Jacob. At first, Bateau Lavoir mainly hosted Italian and Spanish artists. Ardengo Soffici and ceramist Paco Durio were the first headliners. Thanks to the latter, Pablo Picasso settled there in 1904 for five years. He painted Les Demoiselles d'Avignon and began his cubist period there. The residence also welcomed the Douanier Rousseau, Amedeo Modigliani, Henri Matisse, Georges Braque, Guillaume Apollinaire and Jean Cocteau into the small, cramped workshops of this extraordinary house. At Bateau-Lavoir, artists could refocus on their creation. With the emergence of the artistic scene in Montparnasse and notably La Ruche, the Bateau-Lavoir lost its beauty. In 1970, the wooden structure did not resist a fire and only the facade survived this accident. Fortunately, eight years later, architect Claude Charpentier rebuilt Bateau Lavoir. The place cannot be visited. 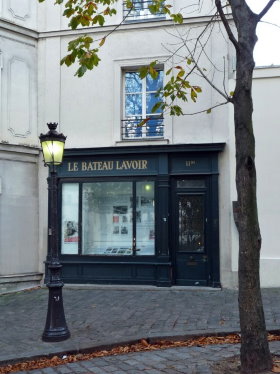 In 250, Saint Denis, the first Paris bishop, was beheaded on the site of the Martyrium, 11 rue Yvonne Le Tac, walked with his head in his hands to Saint-Denis where he was buried. In the 5th century, Saint Genevieve built in Saint-Denis a chapel dedicated to Saint Denis. It later became a powerful abbey.

In the 11th century, a chapel, belonging to the Abbey of Montmartre, was built on the site of the Martyrium. It was for centuries an important place of pilgrimage. It included a crypt which was accessed by a staircase.

On August 15th 1534, Saint Ignatius of Loyola, Saint Francis Xavier and five other companions bound themselves on the spot by vows, the first step in the creation of the Jesuits. The Jesuits later spread the gospel all over the world, including in China, Japan, Indonesia and South America. 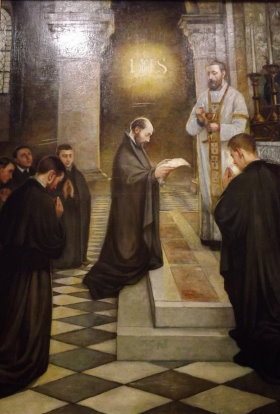 Rue des Abbesses is named after the abbesses of the prestigious Montmartre abbey. It is still a very typical Parisian street with many interesting specialty fashion stores, lively bars, restaurants and boutique hotels.

The famous Bateau Lavoir, where Picasso lived and worked, the interesting Saint-Jean-de-Montmartre church, 19, rue des Abbesses, and the Guimard Art Nouveau entrance of Abbesses metro station had to the atmosphere of the street. 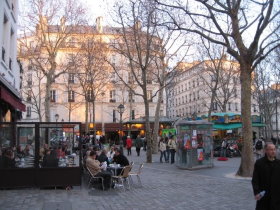 Renoir, Van Gogh and Picasso stand out among the painters who lived in Montmartre and painted it.

A number of artists and shops in Montmartre sell more affordable and good quality views of this picturesque district. 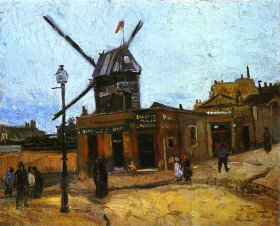