The Roland-Garros tournament is held in the fancy Roland-Garros Stadium located on the edge of the very large Bois de Boulogne in Paris and of the affluent city of Boulogne. 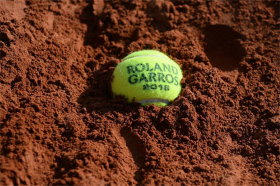 Roland-Garros is played on clay 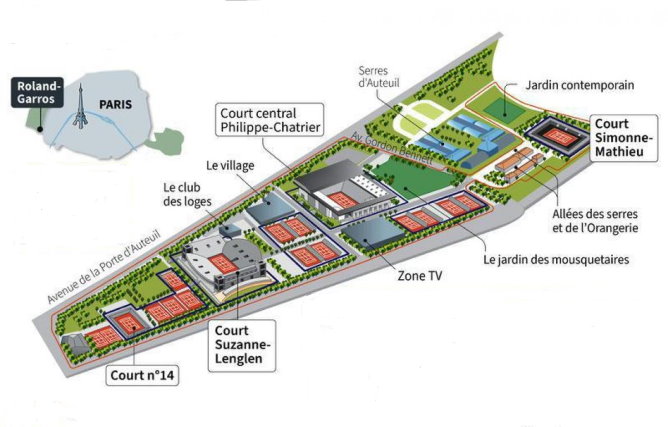 Roland-Garros does not have its own metro stop.

The closest metro stop, Porte d'Auteuil, on line 10, is a 10' walk from the stadium.

Free shuttles are available during the tournament. Download and print the detailed Roland-Garros transport map with all the various metro, bus, shuttle options.

The Michel-Ange Auteuil and Michel-Ange Molitor stops on line 9 are also feasible for good walkers. 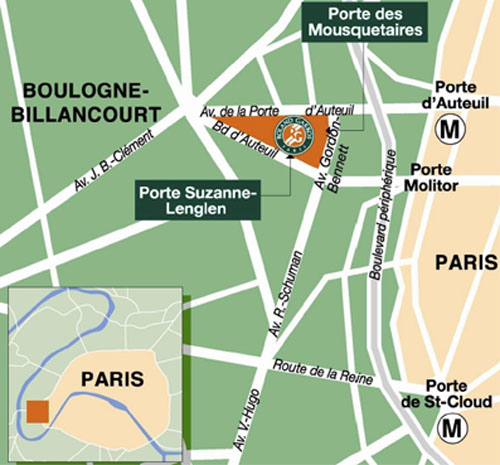 Roland-Garros 2023 will be played from May 21 to June 4 2023. Ticket sale will be through Roland-Garros web site. Ticket options give access to single matches up to unlimited access to matches.

There are three main courts, Philippe-Chatrier, Suzanne-Lenglen, Simmone-Mathieu, for the most important matches, and outside courts.

Find a hotel near Roland-Garros Stadium or a hotel in Paris central districts (20 to 30 minutes by metro). The Rolex Paris Masters are the city's second world level tennis tournament. 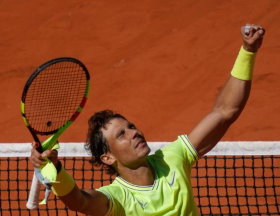 There are almost no hotels closest to Roland-Garros Arena than hotel Botaniste located in the affluent Auteuil district. Less than 1 km from Roland-Garros Arena and a few metro stops away, Hotel Botaniste provides rooms with air conditioning. Among the various facilities are a bar, a garden, as well as a terrace. The property has 2 buildings : House Molitor with rooms Jasmins, Passiflores and Hibiscus, the breakfast room and the reception and House Boileau with rooms Mélisses and Aubépine. Buffet breakfast. 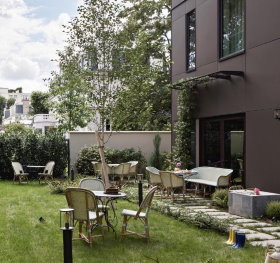 The Roland-Garros tournament in Paris is the premier clay court tennis tournament. This prestigious event is also the second of the four Grand Slam tournaments. The slow playing surface makes it very demanding. The tournament is the most exciting sport event in the city. 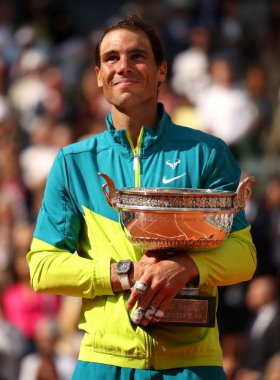 The organizer of the Roland-Garros tournament, the French Federation of Tennis (FFT), was at the origin of the stadium modernization project. Roland-Garros stadium had become much too small and it was not functional enough compared to its top international competitors such as Wimbledon and Flushing Meadows. The Philippe-Chatrier central court had no roof, a big problem when it rained. The Place des Mousquetaires, the central meeting point, was much too small.

Among other scenarios, the decision was taken in 2011 to keep the exceptional location of Roland-Garros stadium on the edge of Bois de Boulogne. This scenario extended the stadium into Serres d’Auteuil, a wonderful botanical garden next to the stadium on the right, and relocated there the tennis court n°1. It has been the key factor leading to a huge controversy and multiple court challenges to the project, now cleared. The FFT was the contracting authority for all Roland-Garros works for a total cost of 360 million euros. It self-financed these costs at close to 95%. Owner of the site and responsible for the urban development, the City of Paris has supported the project since the beginning. It subsidized the project up to 20 million euros. The most spectacular elements of Roland-Garros project shown on the map below are the retractable roof of the Philippe-Chatrier court (2020), which now allows to hold the competitions whatever the weather, the new Court Simonne-Mathieu in Serres d’Auteuil on the right of the map, which is now harmoniously integrated into the garden and the new Les Mousquetaires central square at the center of the map, which became an open esplanade of one hectare. The new Roland-Garros stadium will be one of the major equipments of the Paris 2024 Olympic Games.

The capacity of the new Philippe-Chatrier court, shown below, is maintained at 15 000 seats and the refitting of the stands offers better comfort and visibility to the spectators. New spaces were created under the stands, especially for players and the media. The retractable roof of Philippe-Chatrier court takes up the symbolism of the biplane of the aviator Roland-Garros: its shape and structure have been reworked like an airplane wing. It is made of steel and translucent waterproof canvas; and can be deployed in about fifteen minutes. It allows the Philippe-Chatrier court to maintain its status as an outdoor stadium, bathed in light and sun, while allowing the continuation of the game during bad weather and the holding of evening sessions. The former Place des Mousquetaires, which became too small, takes on a new dimension in the new Roland-Garros. Redeveloped into a vast green esplanade of nearly one hectare in the heart of the stadium, the new place des Mousquetaires airs the site and promotes the fluidity of travel during the tournament, especially when switching from day sessions to evening sessions. Installed on the east side of Central Court, a giant screen allows to follow live the matches throughout the fortnight. During the rest of the year, outside the tournament, the square is open to the public on the model of a Parisian square, offering the neighborhood a new breathing space of nearly one hectare.

In replacement of court n°1 and to enlarge the Place des Mouquetaires, a new court called Simonne-Mathieu, shown below, was built in the south-east part of Serres d’Auteuil, in place of greenhouses devoid of any particular architectural interest contrary to the other greenhouses there. It was inaugurated in 2019. The French Tennis Federation and the City of Paris have chosen to render tribute to the tennis player Simonne Mathieu, resistant and captain of the free French Forces. She won the Roland- Garros tournament in 1938 and 1939 and is until today the second French woman player most awarded with titles after Suzanne Lenglen. Located in the southeastern part of the Gardens of Serres d’Auteuil, this court is a true vegetal ecosystem unique in the world. A third of the stadium capacity (5000 seats) is half-buried and enshrined between four greenhouses with evocative botanical collections of tropical flora from South America, Africa, Southeast Asia and Australia. These new greenhouses are inspired by the architecture of the adjacent historic greenhouses designed by Formigé and are in perfect harmony with the Gardens. These contemporary greenhouses are accessible to the general public all year long. Visitors will discover more than 1000 plants of more than 500 species. A project that is part of the renewal of the Botanical Garden. The revamped Roland-Garros stadium is another spectacular venue of the city. Throughout the world, Roland-Garros is synonymous with tennis. Few people know the stadium was named after a legendary aviator who pioneered fighter combat during World War I. Roland Garros’ passion was flying.

When war broke out in 1914, Roland Garros was famous in the world of aviation. He was exempt from the draft but decided to enroll anyway. He took part in reconnaissance missions and bombings, but was frustrated by technological limitations. Roland Garros helped design a synchronization system that enabled pilots to shoot through a plane’s propellers without hitting the blades. On October 5, 1918, on the eve of his 30th birthday, Roland Garros took part in one last, fateful mission over the Ardennes, along with five other French aircrafts. Four of them had left to chase a German aircraft when a squadron of six Fokker planes suddenly appeared. Roland Garros dived in for the fight and never came back.

In 1928, France hosted the final of the Davis Cup and won it against the USA in a new stadium. The constructor insisted it be named after Roland Garros, his comrade during the war. 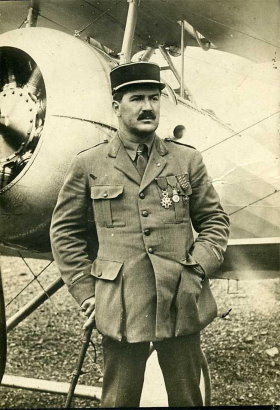