Le Marais, the trendiest district of Paris, has it all: Centre Pompidou. Picasso museum. Fashion shops open on Sunday. Gay and Jewish communities. Bars and nightlife. Old and narrow streets and beautiful mansions. Places to visit in Paris.

It is hard to look back and guess Le Marais was a shabby district in 1970. Poor immigrant families, mostly Jews fleeing pogroms in eastern Europe, lived in ruined houses.

Today, Le Marais is by far the trendiest district in town, a mix of wealthy communities, shopping venues, cultural sights and lifestyle that is unique in Paris. City life is at its best in Le Marais, a district with narrow streets and no boulevards on the right bank of the Seine river, close to Notre-Dame.

Pedestrians and cyclists are kings and there are few cars in the old and tiny streets. Charming boutique hotels are everywhere. Le Marais also has many apartments to rent. 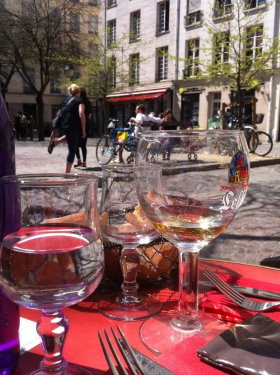 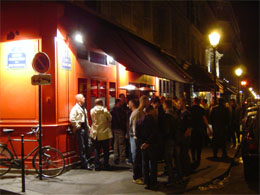 Le Marais is extremely rich with interesting sights, including lovely streets, mansions, churches and monuments, museums. The top 8 sights are must do. 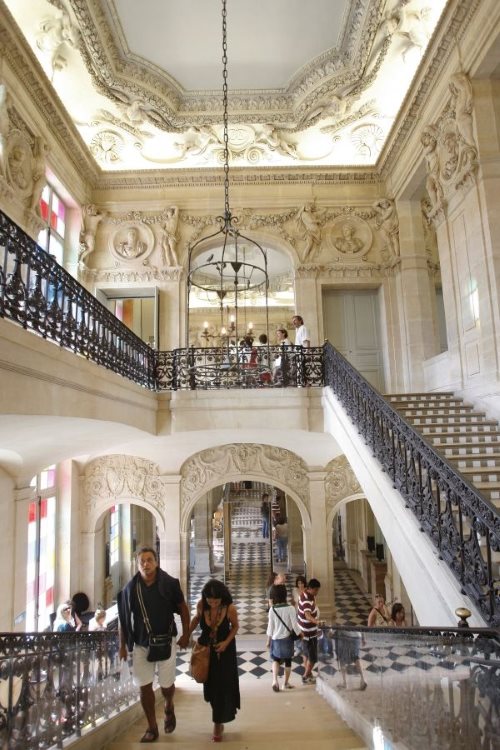 Rue des Francs-Bourgeois is perhaps Paris most trendy shopping street (Paris map). You will find most French fashion brands there. Fashion stores in Le Marais are open on Sunday, which is rare in Paris. The largest stores are:
BHV Marais: one of the best department stores in Paris.
Merci: trendy concept store and decor.
Uniqlo Le Marais: beautiful fashion store in Le Marais.
Le Marais is also rich with house decoration and antique stores such as Fleux and the boutiques in Village Saint-Paul. Le Marais shops review. 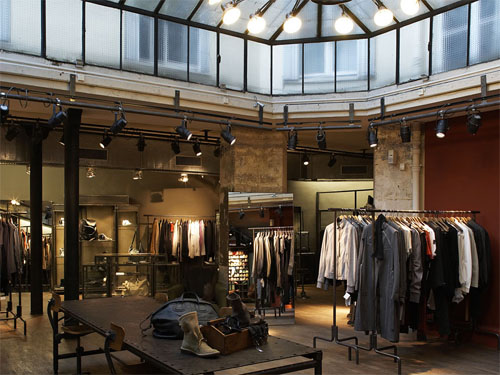 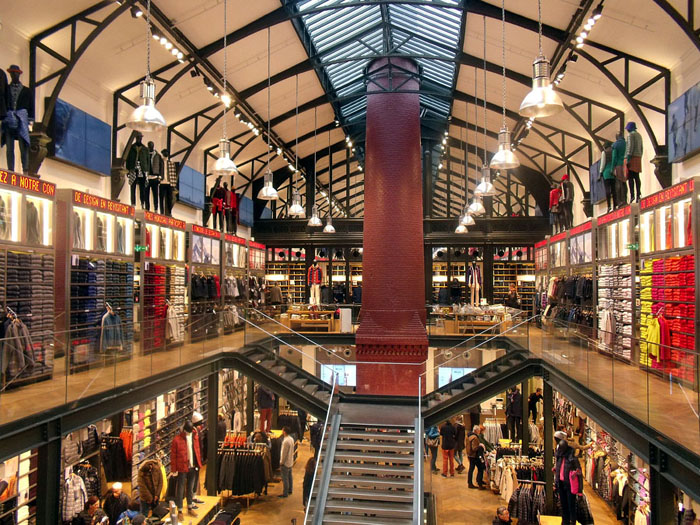 More and more good Paris hotels are in Le Marais. Some are exceptional, set in old houses and so different from modern hotels everywhere in the world. Hotel Presbytère in Le Marais is one of them. Hôtel Le Presbytère is set in the former presbytery of Saint-Merry church. It is a mere 300 m from the famous Pompidou Centre and 350 m from Forum des Halles shopping centre. Notre-Dame is 800 m away. Set over 5 floors, each room in this 3-star hotel has an en suite bathroom. The Gothic decoration and furnishings will transport guests to another time. A courtesy tray is provided in each of them. A continental breakfast is served daily, in the comfort of your rooms if booked in advance. There are pLenty of bars in rue des Lombards near-by. Many restaurants can be found within walking distance. Chatelet metro station (lines 1, 4, 7, 11 and 14) is just 350m from Hôtel Le Presbytère, making it easy for guests to discover the parts of Paris that are further away. A public car park is available at a surcharge. 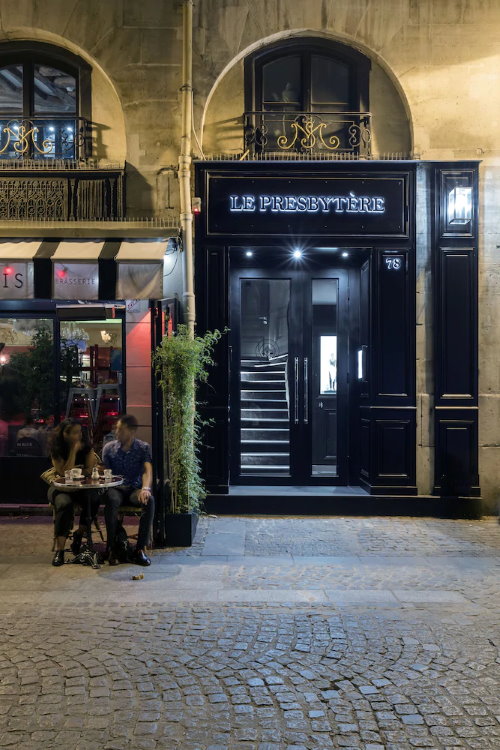 King Philip Augustus (1180-1223) surrounded the right bank of Paris with a wall. A portion of it is still visible rue des Jardins Saint-Paul. The North Eastern area outside the wall was then mostly swamps, Marais in French. The Abbeys owning the lands dried them out and cultivated them. In the 14th century, King Charles V took up residence in Le Marais, which became the royal district. After the tragic death of King Henri II in 1559, the Royal family moved to the Louvre.

King Henri IV (1589-1610) commissioned Place Royale, now Place des Vosges. As a follow-up, many nobles built their residence in the area. The Hotel Salé housing the Picasso Museum and Hotel Carnavalet housing the Carnavalet Museum are glorious testimonies of Le Marais in the 17th century. The district was also alive with an intense religious life. In the 18th century, the nobles migrated to the left bank. In the 19th century, workshops replaced the gardens and the courtyards. Le Marais was abandoned and hopefully spared from major destructions. The 1962 law on protected areas started the renovation of the district, the only one not remodeled during the 19th century. Paris history 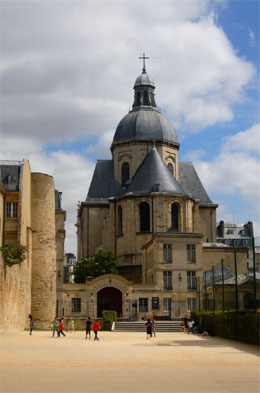 Saint-Paul Saint-Louis, the XVIIth century Jesuit church of Paris, stands next to the ruins of Philip Augustus wall

In the 17th-century, Le Marais, a district miraculously spared by three and a half centuries of development work in the capital, was the top literary district in the city. In the 1660s, in his hotel which has now become the Historical Library of the City of Paris, 24 rue Pavée, Guillaume de Lamoignon, first president of the Parliament of Paris, brought together on Mondays the greats of his time: Racine, Boileau, La Rochefoucauld. In 1662-64, Corneille stayed with the Duke of Guise in his hotel at 58 rue des Archives. Much of the hotel would then be replaced by the beautiful Hôtel de Soubise, which now houses the National Archives. Blaise Pascal lived at 13 rue de Saintonge in 1648-51 and carried out his research on emptiness there. Madame de Sévigné lived at 23 rue de Sévigné, in the Hôtel Carnavalet, between 1677 and 1696.

Jews have been living in Le Marais since the Middle Ages. At the end of the 19th century, Jewish immigrants arrived mostly from Eastern Europe and Alsace Lorraine. The district was known as the Pletzel, Yiddish for little square, because of its narrow cobblestone streets. It was packed with small shops, mostly clothing, kosher delis and bakeries, yeshivas and synagogues. As French Jews improved their social and economic conditions, they left the Marais for other parts of Paris. In recent years, the Marais has become gentrified, a popular attraction for tourists, now featuring trendy boutiques, restaurants and clubs. Still, the Jewish presence in the Marais is unmistakable.

The main sights are in the area of Rue des Rosiers, Rue Pavée and Rue Ferdinand-Duval, previously named Street of the Jews. Parisians flock to the district to eat from the famous falafel stands or for a mix of French and Eastern European Jewish dishes at Florence Kahn’s Bakery and Delicatessen. There are a few synagogues, most notably the architectural gem, 21 bis, Rue des Tournelles. A yeshiva in the neighborhood is evidenced by Orthodox Jews in traditional black coats and hats walking along Rue Pave. 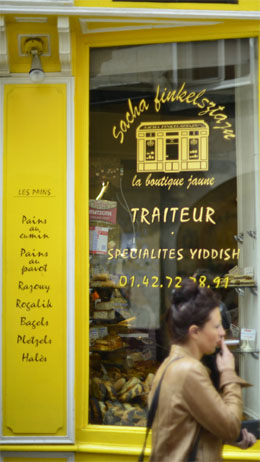