Parisians love the romantic Luxembourg Gardens. The classical Tuileries Gardens are part of the famous triumphal way from the Louvre Museum to the Arc de Triomphe.

The Place des Vosges in Le Marais, Parc de Bercy, the hilly Parc des Buttes-Chaumont, the classical Parc Monceau and Parc Montsouris are great gardens too. The Giverny Gardens near the city may be the most famous of all through their link with impressionist painter Claude Monet.

Under Napoleon III and the prefect Haussmann, Paris was reorganized: it was an opportunity to offer new "lungs" to the city by offering its inhabitants new spaces intended for vegetation. Indeed, the squares and gardens were one of the most visible changes in the Parisian landscape. Thirty squares were designed and now adorn the city. Many boulevards were lined with trees at the same time so that the city altogether has many trees and green spaces. 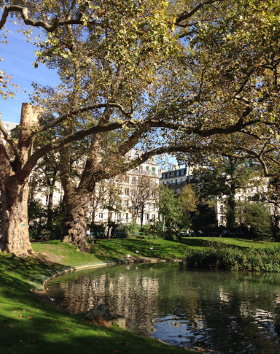 The Bois de Boulogne and Bois de Vincennes are large and pleasant parks in the city with many first class attractions including the Fondation Louis Vuitton and Paris Zoo.

The magnificent royal Versailles Gardens are the perfect example of 17th century French parks around the city. We love the large Compiègne and Fontainebleau forests. These royal forests attract many Parisians for hiking, cycling and horse riding during a day or a weekend. Both feature a spectacular royal castle and other top attractions. 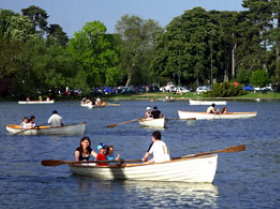 On the north-eastern side of Paris, Parc de la Villette is a beautiful park, the largest and one of the bests in the city. 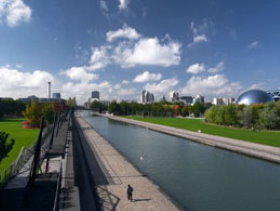 In early 20th century, the famous impressionist painter Claude Monet worked hard to turn his colorful Giverny Gardens near the city into a source of inspiration. Maintained in their original design, Giverny Gardens will remind you of famous paintings by Monet such as the Japanese bridge and the waterlilies.

A simple way to visit Giverny Gardens is on a guided tour (not available in winter). You can combine the visit of Giverny with a visit to Versailles, a one day tour. 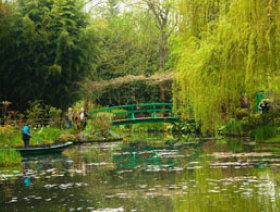 The 264 Japanese cherry trees of Parc de Sceaux offer an unparalleled show in Grand Paris. They are like a fireworks that would last several days in spring. Each year, the Hanami, the flower festival in Japan, is celebrated.

Everyone is invited to extend their picnic table, to attend a free show of taiko (drum) and awa odori (traditional dance).

April is therefore a very good time to visit the Parc de Sceaux, the most beautiful pedestrian green space of Grand Paris.

Gardens and parks history: the green spaces of the Second Empire

From 1852 to 1870, under Napoleon III and the prefect Haussmann, Paris was reorganized. It was an opportunity to create new spaces intended for vegetation. The squares and gardens were one of the most visible changes in the Parisian landscape. With the help of Alphand, his engineer-gardener, Haussmann planted the city like never before. All the plantations carried out in Paris were organized according to a coherent, hierarchical and systematic program. They must be present throughout the capital and well distributed in the East as in the West. The presence of vegetation in the urban universe was ensured in continuity with the large woods by large avenues. For this, Haussmann continued the idea of ​​Rambuteau who planted two rows of trees in certain streets and who also planted the Grands Boulevards.

Haussmann was inspired, according to the tastes of Napoleon III, by the London model with regard to the interweaving of plants in urban areas. However, the Parisian creations have their own style, not allowing them to be confused with the English model. As early as 1852, all the boulevards and avenues were planted with the exception of the avenue de l'Opéra, according to the choice of its architect, Charles Garnier. The streets, for their part, were never planted, except rue des Pyrénées and rue Faidherbe. Before Haussmann's work, there were 50,000 trees in Paris. He would double this number.

The urban squares were one of the main innovations of the Second Empire. Despite its English name, the urban square is very Parisian: it is a public garden. The squares are distributed throughout the capital but mainly in the oldest districts that needed it most. Today there are around thirty. They are built on old squares or old private squares. The square was organized so as to create a certain intimacy for the people who walk there, by surrounding them with relatively thick plantations. Sometimes a small river flows there. The Haussmannian square is in fact a heritage of the French private garden as could be found at the beginning of the XIXth Century, adorning private mansions.

The city woods are ancient royal forests that have been redeveloped. Arranging the Bois de Boulogne was one of Napoleon III's first decisions. Being an old royal forest, it underwent some changes and was ceded by the State to the city in 1852. Located in the West, the Bois de Boulogne, forms, with the acquisition of Bois de Vincennes (East) and parks (smaller) of Buttes-Chaumont (North) and Montsouris (South), a network of large natural spaces in Paris.