Versailles Gardens are associated with Sun King and his gardener, Le Nôtre. These XVIIth century French style gardens are one of the jewels of Versailles, the royal palace near Paris. The Grand Canal, the Grand Trianon, the Petit Trianon, the many statues and fountains are the treasures of these gardens, very famous in the whole world. Palace of Versailles facts.

Versailles Gardens are a perfect example of classical French gardens where nature is ordered geometrically. Although they maintain the symmetry of Italian tradition, the Gardens have a network of axial pathways leading off to the horizon. These paths are cadenced by rond-points, pavilions, arboreal architecture, wider areas that suddenly appear ahead, stairways, terraces, ponds, and monumental fountains that expand the visual perception of space and add a sense of wonder. Map of Versailles Gardens. Top Paris gardens. 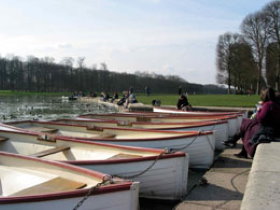 Count a whole day for Versailles Gardens and Palace.

The gardens are a perfect place to take a rest out of the city. They are open from 8am to 6pm everyday. Rent a boat on the Grand Canal or a bicycle in the Gardens' alleys. Information. Take a snack or a lunch in the elegant La Flotille restaurant.

If you have a full day in Versailles, don't miss two treasures: the Grand Trianon and Petit Trianon. The lovely Marie Antoinette's estate is also worth your time.

The Musical Fountains Show is a key attraction. Fountains play to the sound of baroque music to please ears and eyes. Walkers discover the groves of Versailles, and the fountains whose jets of water rise and fall in time to the music. There is a choice of routes, each leading to some of the Garden's stunning features. Information. 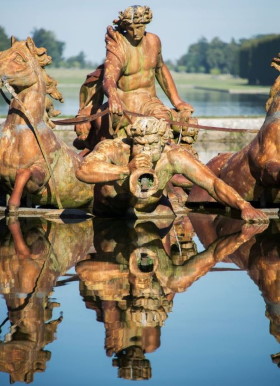 The basin of Apollo in Versailles Gardens

The Latona fountain is one of the highlights of Versailles Gardens. Commissioned by Sun King to highlight the myth of Apollo, an allegory for the glory of the Sun King, the fountain was dedicated to Latona, the mother of Apollo and Diana, whose adventures have been told by the Latin poet Ovid. Latona bore Jupiter’s children Apollo and Diana. She was forced to search for a place to give birth to her illegitimate twins. She came to Lycia, where she saw a clear pond and approached to quench her thirst. The local peasants refused to let her drink. They entered the pond and stirred up the muddy bed so that the water became undrinkable. Latona cursed the peasants, turning them into frogs and condemning them to a habitat of murky waters. Don't disobey Sun King. You could be turned into a frog. 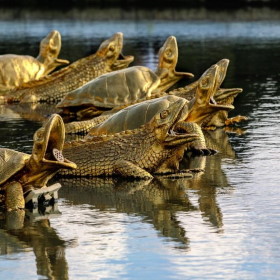 The Encelade fountain is an expressive masterpiece executed in lead by Gaspard Marsy between 1675 and 1677. It represents the giant Encelade in Greek mythology. Armed with huge rocks and fiery oaks, the giants are defeated by the Gods as they launch their assault on Olympus. Enceladus tries to flee the massacre. Mad with fury, the goddess Athena throws him a huge rock, Sicily, which bursts and buries him. Enceladus was struck down by Jupiter and buried by the rocks thrown by Athena on the island of Sicily, under Mount Etna. The fountain shows the giant, half-buried under the lava, screaming in pain and terror. 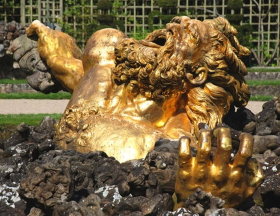 The Versailles Gardens are one of the jewels of Versailles. They were designed between 1661 and 1670 by Le Nôtre, the gardener of King Louis XIV, Sun King, the designer of the Tuileries Gardens in Paris and Parc de Sceaux near Paris. The works took forty years to complete. Jean-Baptiste Colbert, Superintendent of the King’s Buildings, directed the project from 1664 to 1683. Charles Le Brun, First Painter of the King, produced the drawings for many statues and fountains. The laying out of the gardens required enormous work. Vast amounts of earth were shifted for the flower beds, the fountains, the Canal. Spread with statues and fountains, the gardens were the setting of splendid royal parties until the 1789 revolution. 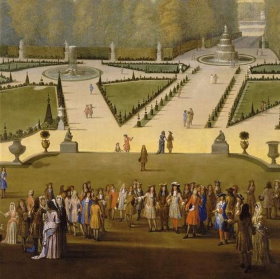 In 1661, Louis XIV entrusted André Le Nôtre with the creation and development of the gardens of Versailles which, in his eyes, were as important as the palace. The works were undertaken at the same time as those on the palace and lasted around forty years. But André Le Nôtre did not work alone. Jean-Baptiste Colbert, superintendent of the king's buildings, from 1664 to 1683, directed the site; Charles Le Brun, appointed the king's first painter in January 1664, provided designs for a large number of statues and fountains; finally, the king himself wanted the details of everything. A little later, the architect Jules Hardouin-Mansart, who became the first architect and superintendent of the King's buildings, built the Orangery and simplified the layout of the gardens, in particular by modifying or opening certain plantations.

The creation of the gardens requires a gigantic work. Huge earthworks wee needed to level the spaces, develop the flower beds, build the Orangery, dig the ponds and the canal, where there were only woods, meadows and swamps. Thousands of men, sometimes entire regiments, participated in this vast enterprise.

André Le Nôtre began to transform the park and gardens of Versailles in the early 1660s. They are the finest example of Jardins à la Française or the French gardens. They were originally designed to be viewed from the terrace on the west side of the palace, and to create a grand perspective that reached the horizon, illustrating the king's complete dominance over nature. In 1662, minor modifications were made to the castle; However, more attention was paid to the development of the gardens. The existing groves and flowerbeds were enlarged and new ones created. Among the most important creations at this time were the Orangery and the Grotto of Thetys. The Orangery of Versailles, designed by Louis Le Vau, was located to the south of the palace, a situation which took advantage of the natural slope of the hill. It was a protected area in which orange trees were kept during the winter months.

In 1664, the gardens evolved to such an extent that Louis XIV inaugurated the gardens with the gallant festival called "Les Plaisirs de l'Île Enchantée". The event, which was to officially celebrate his mother, Anne of Austria, and his wife Marie-Thérèse, but actually celebrated Louise de La Vallière, Louis's mistress, took place in May of the same year. The guests feasted on fabulous entertainment in the gardens for a week. As a result of this feast - especially the lack of accommodation for the guests, Louis realized the shortcomings of Versailles and undertook a further expansion of the castle and gardens.

Between 1664 and 1668, there was a surge of activity in the gardens, especially with regard to the fountains and the new groves; It was during this time that garden imagery consciously exploited Apollo and solar imagery as metaphors for Louis XIV. The envelope of the castle of Louis XIII de Le Vau was a means by which, while decorating the facade of the garden, the images of the decorations of the large apartments of the king and the queen formed a symbiosis with the images of the gardens.

With a length of 1,500 meters and a width of 62 meters, the Grand Canal, built between 1668 and 1671, physically and visually extended the east-west axis to the walls of the gardens. Under the Ancien Régime, the Grand Canal served as a meeting place for nautical supporters. In 1674, following a series of diplomatic arrangements for the benefit of Louis XIV, the king ordered the construction of Little Venice. Located at the confluence of the Grand Canal and the junction of the North Cross Branch, Little Venice housed caravels and yachts received from the Netherlands and gondolas and gondoliers received as gifts from the Doge of Venice, hence its name.

La Flotille is a restaurant and bar that we love, specially off-season. Ideally located on the canal front of Versailles Gardens, it has successfully kept its original French charm, which dates back to the early 1900s. La Flotille is open for lunch everyday including Monday when the Palace is closed. The restaurant is open from 12pm to 3.30pm, serving a wide range of meat and fish courses. The brasserie is opened from 10am until 8pm with grilled dishes, daily specials, salads, toasted sandwiches, pizzas, pasta, burgers, club sandwiches, pastries, crêpes, waffles and ice-creams. 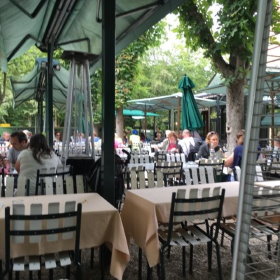 You come to Paris for at least two days. Visit Versailles, a Unesco world heritage sight and one of the most visited sights in and around Paris. It takes half a day to visit Versailles on a tour from the City of Lights with skip the line ticket. Versailles is crowded. We recommend to come in winter and to avoid Tuesdays. If you have a full day, combine the visit of Versailles Palace with Giverny, the house and gardens of Monet, near Versailles. Detailed Information. Alternatively, take public transport from Paris to Versailles. 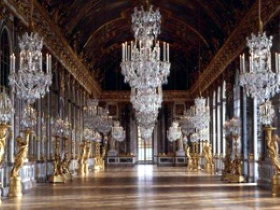