Luxembourg Gardens in Paris are the ideal setting of romance, loved by couples, students, children, tennis and chess players. Flowers, statues, fountains, outdoor cafés, the Luxembourg Museum make up a must do. The Luxembourg Gardens tend to be crowded on sunny days and in the summer. Go there in the morning and on weekdays. Famous Paris gardens.

The Luxembourg Gardens, Jardin du Luxembourg in French, are a 25 hectares oasis in the heart of Paris. Spread with statues, fountains and flowers, they are the most romantic gardens in Paris. They have many attractions for children: ponys, merry-go-round, puppet shows (web site). Parisians love them and they are crowded on sunny days.

Paris metro: RER B Luxembourg station. Saint-Sulpice station on metro line 4 is 5' walk away from the gardens.

The left bank district around the gardens is quiet and lovely (left bank Paris map). Discover the area on a left bank Paris walking tour. Staying in one of the many boutique left bank hotels near Luxembourg Gardens is a great idea for a stay. 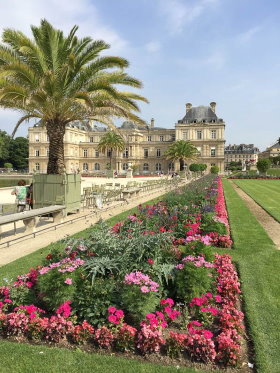 Luxembourg Gardens are in the left bank 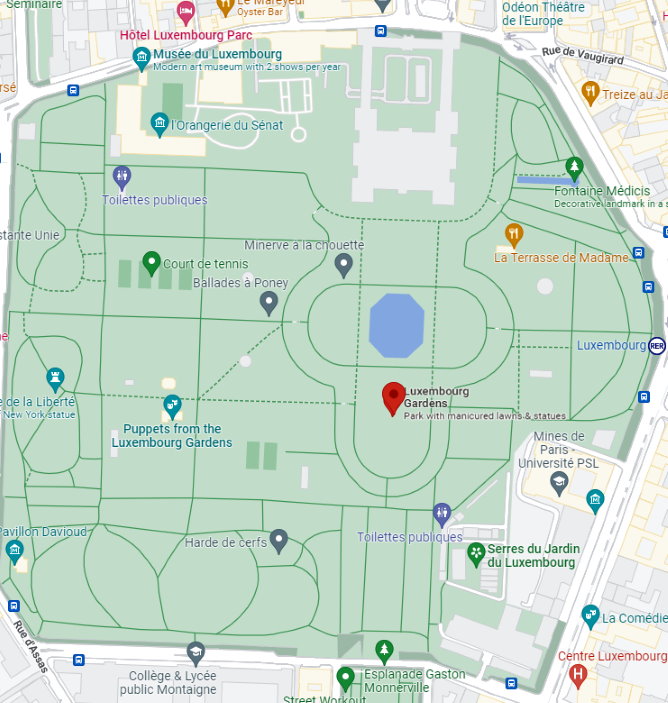 The name Luxembourg comes from the Latin Mons Lucotitius, the name of the hill where the Gardens are located. After the assassination of her husband, King Henri IV, in 1610, Queen Marie de Medici decided to leave the Louvre, bought the land, commissioned the Gardens and Palace in 1612.

The 1789 revolution extended the gardens southwards with the land of the Chartreux convent (picture). In 1804, Napoléon turned the Palace into the French Senate, the upper house of parliament. The Gardens were opened to the public and have remained so ever since.

Haussmann's developments were made largely at the expense of the park, which was initially reduced by the widening of rue de Vaugirard and the opening of boulevard Saint-Michel. It was decided in 1865 to limit the garden to the south by rue Auguste Comte. 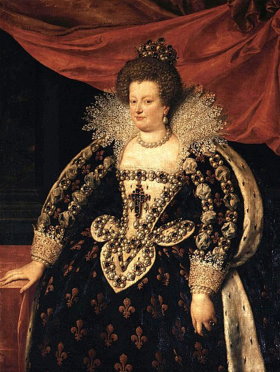 Hotel Delavigne is 250 m from Odéon Metro station and 650 m from Luxembourg Gardens. It offers soundproofed accommodation with free Wi-Fi. Each room mixes contemporary decor with antique furniture and has a flat-screen TV. The rooms on the upper floors offer views over the rooftops of central Paris. Luxembourg Gardens hotels.

Hotel Delavigne is near Luxembourg Gardens

They are a few kiosks which serve food and drinks and seated restaurants in the gardens. It is also possible to picnic. Altogether, a nice experience.

La Terrasse De Madame is a perfectly shaded terrace restaurant in the middle of the gardens. Service is polite and prompt once you have a table and the drinks menu is broad with very good non- alcoholic cocktails alongside beers and aperitifs. The atmosphere is pleasant. 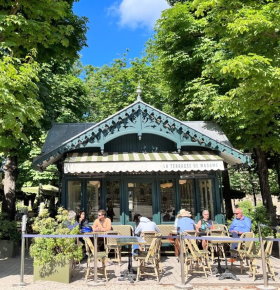 After the death of King Henri IV in 1610, his widow, Queen Marie de Medici, became regent to her son, Louis XIII. She created the Luxembourg Gardens in 1612 and asked architect Salomon de Brosse to built a palace that would remind the Pitti Palace in her native Florence.

Marie de Medici commissioned for the palace a series of twenty-four monumental paintings executed by Flemish painter Paul Rubens between 1622 and 1625 and depicting Marie's struggles and triumphs in life. These paintings are now visible in the Galerie Medicis of the Louvre, one of the treasures of the museum's Flemish paintings department.

The education of the Princess shows a maturing Marie de Medici at study. Her education is given a divine grace by the presence of three Greek gods Apollo, associated with art, Athena, with wisdom and Hermes being the messenger. 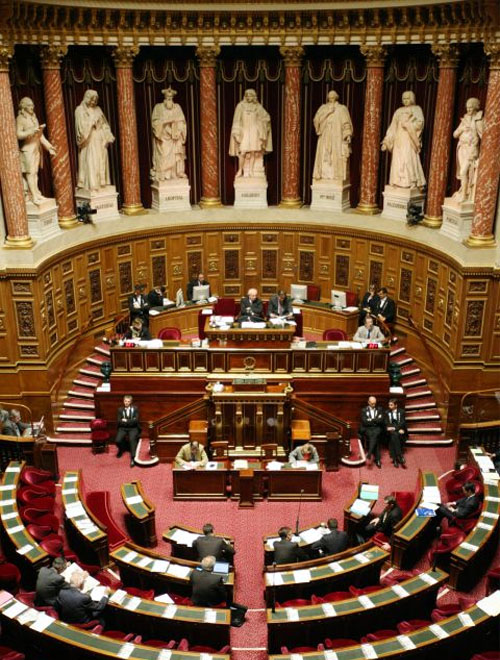 The Senate is housed in Luxembourg Palace

The Senate in Luxembourg Palace

Since 1799, the Luxembourg Palace houses the Senate, one of the two chambers of the French Parliament with the National Assembly. Members of the two Houses are chosen by two different electoral systems. Examination of bills by both Houses of Parliament makes for better laws. The 348 senators are assisted by specialized civil servants and parliamentary aides. In all, 2000 people work for the Senate. The Speaker of the Senate ensures the stability of France’s institutions as he is called upon to replace the President of the Republic in the event of his death or resignation. The Luxembourg Palace cannot be visited.

During the German occupation of Paris from 1940 to 1944, Hermann Göring took over the Senate as the headquarters of the Luftwaffe. It was a key point for German forces defending the city in August 1944. Thanks to the decision of Commanding General von Choltitz to surrender the city rather than fight, it was only minimally damaged.

The Senate is housed in Luxembourg Palace

The Musée du Luxembourg is located 19, rue de Vaugirard at the edge of Luxembourg Gardens. Established in 1750, it was initially located in the east wing of the Luxembourg Palace. It was the first public gallery in the city, displaying the King's collection including Titian, Da Vinci and other paintings now forming the nucleus of the Louvre collections. In 1818, it became a museum of contemporary art. In 1884 the museum moved into its current building, the former orangery of the Palace. The museum began to be used for temporary exhibitions in 2000.

The museum now hosts two exhibitions a year. Choice themes are the Renaissance in Europe, the relationship between art and power, as well as the role of Paris in arts. The spaces have been completely redesigned by architect Shigeru Ban to accommodate the Angelina restaurant and tea room as well as educational workshops. 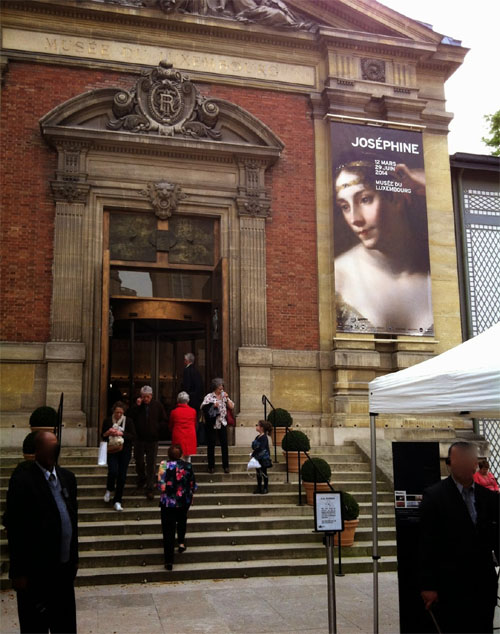