Les Tuileries Gardens stretch their French style alleys and lawns along the Seine river connecting the Louvre Museum to Place de la Concorde. Initially a royal garden, they have been open to the public for 450 years. Top Paris gardens.

The 28 hectares Les Tuileries Gardens, called Jardin des Tuileries in French, are the most central gardens in Paris. They are a natural stop after a visit of the Louvre at walking distance. The walk from the Louvre to Place de la Concorde across the gardens towards the Champs-Elysées is a must.

We warmly recommend you the Paris triumphal way walk through the gardens and up to Arc de Triomphe. It is a good idea to book a hotel near Louvre Museum and Les Tuileries Gardens, a central city district. 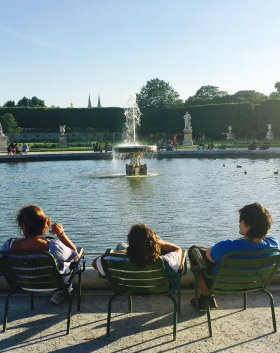 In 1559, Queen Catherine de Medicis moved her residence to the Louvre Palace. She decided to build Les Tuileries close-by, a new palace with a garden modeled after the gardens of her native Florence. Catherine commissioned a landscape architect from Florence, Bernard de Carnesse, to build an Italian Renaissance garden, with fountains, a labyrinth and a grotto. The Tuileries were the largest and most beautiful gardens in Paris at the time.

In 1664, Jean-Baptiste Colbert, the superintendent of buildings of Sun King, commissioned the landscape architect André Le Nôtre to redesign the entire gardens. Le Nôtre transformed Les Tuileries into a formal garden a la française, a typically French style he had perfected în Versailles Gardens and later applied in Parc de Sceaux, based on symmetry, order and long perspectives. Les Tuileries Palace, a historical and beautiful French Palace, was burnt by the Paris Commune in 1871. 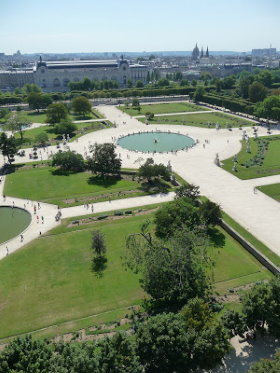 Les Tuileries Gardens from the air 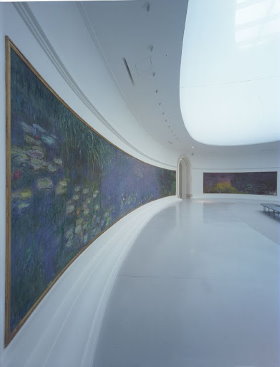 The waterlilies by Claude Monet are in Orangerie

Built from 1806 to 1808, the Arc de Triomphe du Carrousel was commissioned by Napoléon to commemorate his victories of 1805. It is 15 meters high, 17.6 wide and just over 7 meters deep. Completed long before the Arc de Triomphe de l'Etoile, it is also significantly smaller. This monument is inspired by the Roman Triumphal Arch erected at the foot of Capitoline Hill in honor of the victories of "Septimus Severus", Emperor of Rome between 193 and 211 A.D. 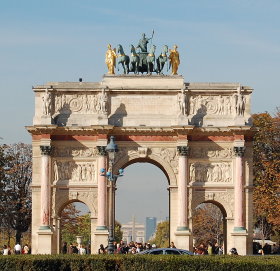 Loulou is the high end restaurant of the Arts Decoratifs Museum, set in the Louvre Palace. It has a great terrace with impressive views of the Louvre. Web site.

Located in the heart of Les Tuileries Gardens, the Café des Marronniers is sheltered from the lively Rue de Rivoli. It is open every day and offers a catering service at any time of the day. As the weather permits, enjoy the outdoor tables under the shade of chestnut trees. Web site. The Café de Diane near-by enjoys similar advantages. 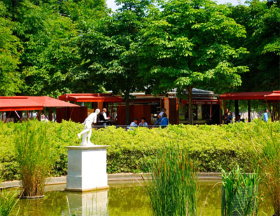 From November 2022 to early January 2023, the largest Christmas market in Paris, called La Magie de Noël ("Christmas magic"), entertains all generations with craftsmen's cottages, a Ferris wheel, an ice rink, children's theater and Guignol. The market is open 7/7 days from 11am to close to midnight. Metro station: Tuileries (line 1). Free admission. The market is located on Terrasse des Feuillants alongside rue de Rivoli.

From 28 June to 24 August, a funfair animates Les Tuileries Gardens. Once inside the great Fête des Jardins des Tuileries, everyone streams towards the stands. The many attractions (the little train, the big wheel, bumper cars, etc.) continue year after year, bringing laughs, fears and excitement for children, with surprises and thrills for adults too. The funfair is located alongside the Rue de Rivoli. 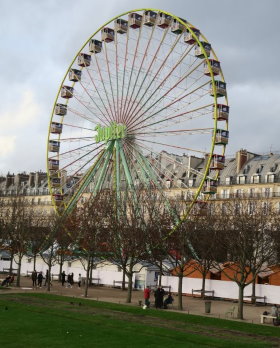 Strollers in Les Tuileries can enjoy the garden as an open-air museum. Statues were installed in late 17th century as part of the Le Nôtre design. Since then, sculptures by leading artists have continued to take their place in the garden, which also hosts an outdoor section of the International Contemporary Art Fair (FIAC) every fall.

The gardens showcase a collection of twenty-one statues by Aristide Maillol (1861-1944).The subject of nearly all of Maillol's mature work is the female nude body, treated with a classical nobility and simplicity. His voluptuous female figures are reminiscent of the women Gauguin painted, but Maillol’s nudes typically exude serenity and stillness. 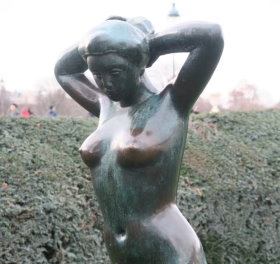 Les Tuileries Palace, Palais des Tuileries in French, destroyed by fire in May 1871, at the time of the Paris Commune, then completely razed in 1886, was located on the current Carrousel gardens, along Avenue du Général Lemonnier. It was intended to form a unique building with the Palais du Louvre, linked to it by the Flore and Marsan pavilions. The start of its construction dates from the 16th century. After the death, in the Hôtel des Tournelles, on June 30, 1559, of King Henry II, his widow, Catherine de Médicis, demolished this royal residence and started construction of the palace under the direction of Philibert de l'Orme and made it continue, after 1570, under that of Jehan Bullant. But Catherine saw only a small part of the Tuileries buildings rise, the central part consisting of a little more than half of the main building on the front of the gardens and the two adjoining galleries, plus the pavilion adjoining the gallerie du Midi, which was completed only under Henri IV; on the other hand, she would have almost entirely planted Les Tuileries Gardens. The central pavilion, crowned with a hemispherical dome, the two adjoining galleries, surmounted by an attic, and the two quadrangular main buildings, to which these galleries led, buildings which, despite annoying and numerous amplifications, have been preserved until 1870, were renowned for their rich architecture and sculpture, and passed, with the Ionic order with which Philibert de l'Orme had decorated them, for graceful models of the architecture of the French Renaissance. The central pavilion included, in the time of Catherine de Medicis, a beautiful staircase. Henri IV, not finding the part of the Tuileries built under Catherine large enough, had Jacques Androuet du Cerceau add a wing with large composite pilasters heading towards the south and a huge pavilion arriving at the quay, the former pavilion of Flora. Under Louis XIV, Les Tuileries had to undergo other important modifications which altered the elegant order: from 1660 to 1665, under the direction of Le Vau, the facade of the palace was completed on the north side; the pavilions of Philibert de l'Orme were raised, and the central pavilion saw its cylindrical dome disappear and was crowned with a quadrangular dome, at the same time as the mass of this pavilion was amplified and raised; finally, after modifications, especially interior, directed by Percier and Fontaine under Napoléon, under Louis-Philippe, the architect Fontaine still had to increase, especially as roof spaces, the mass of the buildings and, in spite of his talent, could only weigh down the appearance even further. During the Second Empire, the Pavillion de Flore was completely rebuilt, and elegant transformations were made to the interior apartments of the southern part of the palace by architect Lefuel, who, moreover, had the large Grande Galerie, connecting the Louvre to the Tuileries, completed. After the destruction of the palace in 1871, he rebuilded the Pavillons de Flore and Marsan. These two pavilions, now terminal parts of the Louvre, are all what remains of this construction site of several centuries. In 1882, the National Assembly decided to raze what was left of the ruins of the Palais des Tuileries; by 1886 they had completely disappeared.