Paris metro is one of the bests in the whole world. Line one was inaugurated in 1900 for the world exhibition and much later than the first lines in London and New York City. Nowadays, the metro of the city covers Grand Paris with 14 lines and 5 RER regional lines. An additional 220 km of underground lines are being built as part of the Grand Paris Express project, a massive extension of the original metro to Grand Paris with 4 metro lines, numbered 15, 16, 17, 18. Transport in Paris.

Paris metro is very dense within the city. It mostly has 1900 architecture stations. Line 14 and RER regional metro lines are contemporary. The metro has 14 lines, mostly underground, running to 214 km in length. There are 300 metro stations in the city. Check our Paris metro map.

The city has the second busiest metro in Europe after Moscow. It carries 4.5 million passengers a day. Chatelet Les Halles with 5 metro lines and 3 RER lines, is the world's largest underground station. 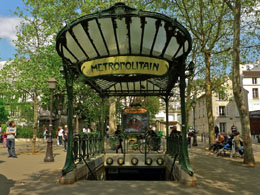 The first metro leaves the terminus at 5.30am. The last metro arrives at the terminal station at 1.15am, except on Fridays, Saturdays and on nights before a holiday, when the service ends at 2.15am. Time between trains range from 2 minutes during rush hour up to 13 minutes during late night hours, holidays, and Sundays, depending on the line and station.

Metro tickets are sold mostly at automated machines at metro stations. They are gradually being phased out and replaced by Navigo travel cards. The new Navigo Easy is practical for occasional travelers and tourists and a good alternative to the metro tickets.

The card can be bought at metro stations. It should then be loaded with transport tickets. The card is not nominative. It can be loaned or transferred. During a trip, however, each traveler must carry and have validated their own card. 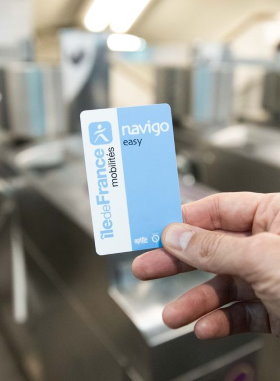 For convenience, we recommend you to buy the economical and practical Navigo Easy travel pass or the Paris Visite Travel pass. Navigo Easy is limited to Paris metro network

The Paris Visite enables the use all the public transport services (no photo needed) with no limitations. It provides unlimited free rides in the region on metro, RER (regional express trains) and buses. 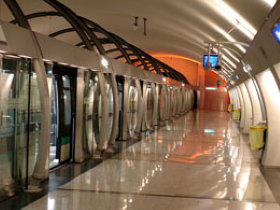 Facts: Paris line 14 is the newest

The RER is the regional metro system. RER stands for Reseau Express Regional (Express regional network). It has 5 metro lines, named RER A to RER D connecting the city center to the surrounding metropolitan area. In the city, the RER acts as an express underground train. Beyond the city centre, the RER is a ground level commuter train connecting suburbs and popular destinations such as CDG Airport (RER B), Disneyland (RER A), Versailles (RER C) to the city center. 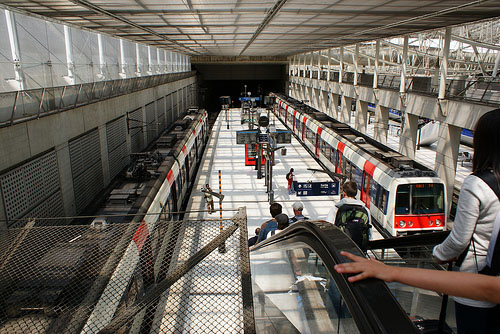 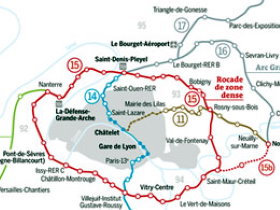 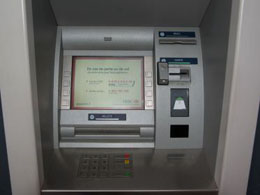 Fulgence Bienvenue, a French engineer, accepted the network project in July 1897, and work began in October 1898. The first line (Porte de Vincennes - Porte Maillot) was opened to the public on 19 July 1900 in order to serve the events of the 1900 summer Olympic Games at the Bois de Vincennes. The putting in place of the metro was agreed upon by the state and the city of Paris to remedy the problem of increasingly insufficient surface transport. They were thinking ahead, in particular, to the upcoming World Fair of 1900. The original project comprised a circular line running Etoile-Nation-Étoile and two transversal lines, one running north-south (Porte de Clignancourt-Porte d'Orléans) and the other east-west (Avenue Gambetta - Porte Maillot). Two management companies then came into being: CMP (Compagnie du métro parisien) and the Nord-Sud company, each using different decorations for their stations. By 1913, the metro network had already grown to comprise ten lines: 8 were the property of CMP. The remaining two belonged to Nord-Sud (the current lines 12 and 13). From 55 million in 1901, the number of passengers had increased to 467 million by 1913. The network continued to grow during the First World War. Between the two wars, lines 9, 10 and 11 were opened and the two management companies merged into one. It was all the way to 15th October 1998 before another new line was opened: the 14, initially running from Madeleine and to the National Library, then extended to cover gare Saint-Lazare. The 14 is an automated line, considerably reducing waiting time. The extension to Mairie de Saint-Ouen of metro line 14, the backbone of the ambitious Grand Paris metro project, was inaugurated on Monday 14 December. This extension includes a 5.8 km tunnel and four new stations: Pont Cardinet, Porte de Clichy, Saint-Ouen, Mairie de Saint-Ouen. It connects Paris to the cities of Clichy-la-Garenne, Saint-Ouen.72,000 workers.