Le Petit Trianon was commissioned by King Louis XV in 1762 and designed by architect Ange-Jacques Gabriel. The King offered it to his longtime mistress, Madame de Pompadour. Le Petit Trianon is associated with Marie-Antoinette who spent there many weeks with her closest relatives and friends. In her movie Marie Antoinette, Sophia Coppola has represented the historical scene when Louis XVI hands over the keys of Le Petit Trianon to Marie-Antoinette. Versailles Palace. 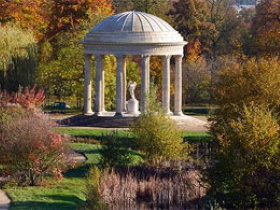 Queen Marie Antoinette came to Le Petit Trianon to escape the formality of court life and shake off the burden of her duties. In Versailles, she was under huge pressure from her family and the court. Le Petit Trianon was her place of ease where she rested from those trials. Nobody was permitted to enter without the Queen's permission. Such exclusivity alienated the court nobility, which she did very willingly, since only the queen's inner circle, including the Princess de Lamballe, and the Duchesse de Polignac, were invited. 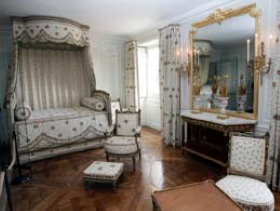 Queen Marie-Antoinette received the Petit Trianon as a gift from her husband Louis XVI on May 24, 1774, two weeks after their accession to the throne. Twenty-five years earlier, the Marquise de Pompadour, favorite of King Louis XV, had arranged in the Trianon estate, away from the Palace of Versailles, a botanical garden composed of exotic and rare plants. Louis XV had later commissioned from the architect Ange-Jacques Gabriel a pleasure castle, the Petit Trianon, suitable for the contemplation of the garden. The Marquise having died shortly after, it was ultimately to his new favorite, the Countess du Barry, that the old monarch had planned to offer this delicious building in neoclassical style, before he died in his turn.

Marie-Antoinette was in no more hurry than to suppress the sumptuous botanical garden and send the plants to the Jardin Royal, now the Jardin des Plantes, in Paris. As a replacement, she arranged an English landscape garden around the Petit Trianon with the help of her favorite architect, Richard Mique. As the years go by, Marie-Antoinette increasingly appreciated being able to take refuge in the Petit Trianon with hand-picked friends, away from the crowds of Versailles. This was not without fueling slander against her, especially since she had installed in her living room an ingenious device of sliding shutters which allowed her to escape view.

To complete her leisure time, she commissioned her architect to develop a hamlet within the boundaries of the estate, with a dozen small houses in an operetta setting. The construction of the Queen's Hamlet stretched throughout the 1780s until the dawn of the Revolution. Contractors, for fear of not being paid, carefully kept a very detailed account of their work, with supporting plans. These precious documents greatly facilitate the work of current restorers.

The Petit Trianon is an example of the transition from the Rococo style of the early 18th century to the sober and refined Neoclassical style of the 1760s. Essentially a cube, Le Petit Trianon attracts interest by its four facades thoughtfully designed to match the part of the estate it faces. The Corinthian order predominates, with two detached and two semi-detached pillars on the side of the formal French garden, and pilasters facing both the courtyard and the area once occupied by Louis XV's greenhouses. 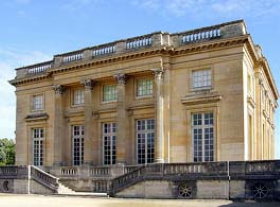 Petit Trianon has been imitated many times around the world, including in Paris with Musée Nissim de Camondo.

Built in 1902 as a stunning replica of Le Petit Trianon, 3800 Washington Street is San Francisco Landmark 95 and one of the City’s most prestigious and expensive grand estates.

It took three years from 1910 to 1913 and $1 million to build Northway, the Greenwich version of Le Petit Trianon in Connecticut. Northway is a nearly perfect copy of the model. 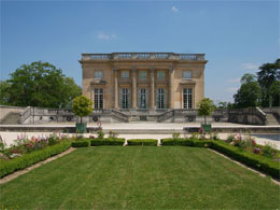 The Petit Trianon in San Francisco

Most visitors focus on the main Versailles Palace and skip Versailles Gardens, their statues, fountains and their three marvels: the Grand Canal, Petit Trianon, Grand Trianon.

You need a full day to visit both. Spend as much time in Versailles Gardens as you can. Visit Le Petit Trianon. Rent a boat on the Grand Canal (1 hour costs 16 euros) or a bicycle in the park (1 hour costs 7.50 euros). Go to one of the two good restaurants: La Flottille or La Petite Venise. The visit of Le Petit Trianon and a lunch at La Petite Venise are included in Versailles Palace full day tour from Paris. Information. 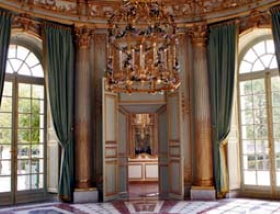 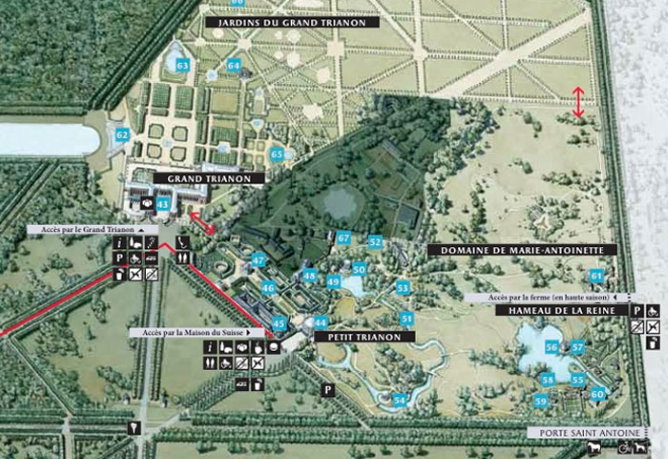 Petit Trianon on the map of Marie-Antoinette's estate in Versailles

Le Petit Trianon is part of the domain of Marie-Antoinette. The domain also includes the Queen's Hamlet (Hameau de la Reine), a rustic retreat built for Marie Antoinette in 1783. Designed with the help of the famous painter Hubert Robert, it contained a meadowland with lakes and streams, a Temple of Love, a belvedere, with a neighbouring grotto and cascade.

Map of Versailles Palace and Gardens.