Founded in the late 19th century, they have always sold the best of what the city and France are famous for: high-end French fashion brands, lingerie, jewelery, perfume and tableware. The best brands are sold there. 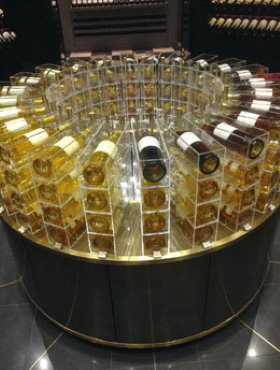 The two most famous department stores are on Boulevard Haussmann, near Opera Garnier, not very far from Louvre. 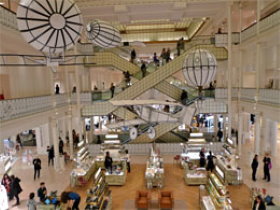 Le Bon Marché is in the left bank

Galeries Lafayette are specialized in French fashion and French perfume brands. They boast a first class La Cave wine store with exclusive Bordeaux wine assortment. The 7th floor terrace has a spectacular view over the city. There are nice Fashion show on Friday at 3pm. Locate Galeries Lafayette on Paris map.

Galeries Lafayette have a second store on Champs-Elysées. The four story store sells fashion, beauty and perfumery products, delicatessen. A restaurant, Citron, and an army of personal stylists complement what should be a new shopping experience in the city. 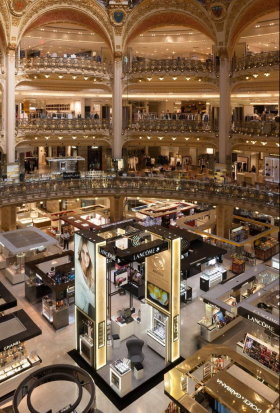 There is a second much smaller Le Printemps department store in Le Louvre Museum shopping gallery. 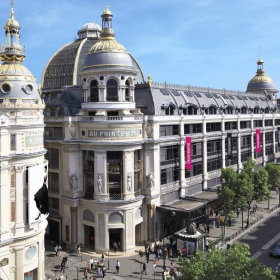 After 15 years of closure, La Samaritaine reopened in 2021 to honor its founders, Ernest and Marie-Louise Cognacq-Jaÿ. The 1870 store has been reimagined, fusing original Art Nouveau and Art Deco details with contemporary newness. Located in the heart of the city, at walking distance of the Louvre Museum, Les Halles and Notre-Dame Cathedral, this iconic landmark will become a must-visit destination for locals and travelers to indulge in what is quintessentially the Parisian experience. Top fashion brands and many restaurants.

Open Monday to Sunday 10am to 8pm. 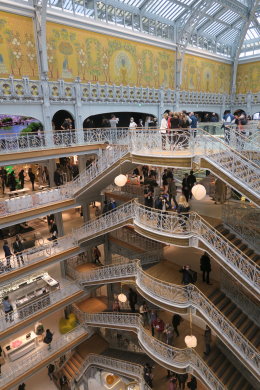 Le BHV Marais is not as fancy and high end as the other department stores. Traditionnaly the best hardware store in town, Le BHV Marais has good fashion, house decoration, kitchenware, tableware departments. The advantages of Le BHV Marais are its location, its mid range positionning and its moderate size for quick shopping. Le Marais is the heart of trendy French fashion. Find there a myriad of stores from innovative brands you will find nowhere else. Rue des Rosiers and rue des Francs Bourgeois are the heart of Le Marais shopping district. 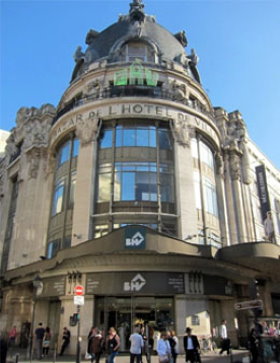 The lesser known Bon Marché, also called now 24 Sèvres, is close to Hermes and other top fashion stores in Rue de Sevres. Smaller and high end, very Parisian, it specializes in fashion. The perfect department store for quiet and trendy shopping. Next door, La Grande Epicerie, 38 rue de Sèvres, is one of the best delicatessen stores in town. Locate Le Bon Marché on the map. 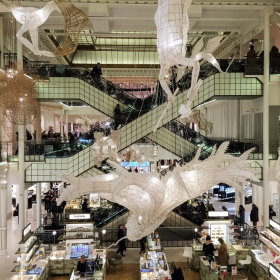 The Bon Marché is the oldest of all Parisian department stores. In 1838, Paul and Justin Videau opened a business where customers could find linen, umbrellas and haberdashery. In 1853, Aristide Boucicaut joined the two brothers and decided to create a department store focused on women. In the following years, Aristide and his wife bought the shares of their associates, enlarged the store, staged the items, labeled their products. The Bon Marché pioneered other novelties: the principle of "satisfied or refunded", the exchange, the possibility of trying on clothing before the purchase. The Boulevard Haussmann Printemps store opened its doors in 1865. At the time, the district was little urbanized, But two entrepreneurs, Jules Jaluzot and Jean-Alfred Duclos, took the bet to install their store, then specialized in the sale of fabrics. The quality of the items and cheap prices made the store famous throughout France. Its neighbour, Galeries Lafayette was created in 1894. At the time, Alphone Kahn and his cousin Théophile Boder took over a multi-specialist retail business at 1, rue La Fayette and continuously enlarged the store. 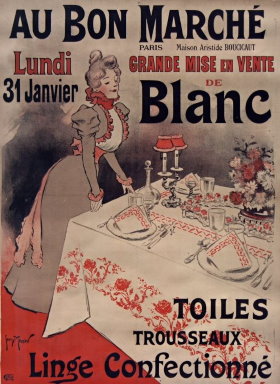