The Muséum, also called Natural History Museum Paris, could be named the Paris Dinosaur Museum. It is famous first for its dinosaurs, but also for its giant crystals and precious stones. The Muséum is set in Jardin des Plantes, one of the largest parks in the city, and was created in the 17th century. A great sight for kids complemented by a small zoo. Paris museums.

Created in 1635 as the Royal Botanical Gardens and dedicated to botanics research, the Jardin des Plantes is a large park located in the left bank of the Seine river. It houses the Muséum, Paris Natural History Museum.

The museum main attractions are the Hall of Evolution, the gallery of comparative anatomy (pdf documentation) with dinosaurs, giant birds, insects, and the gallery of mineralogy with 600.000 minerals, giant crystals and royal precious stones. A great museum with kids. Paris for kids 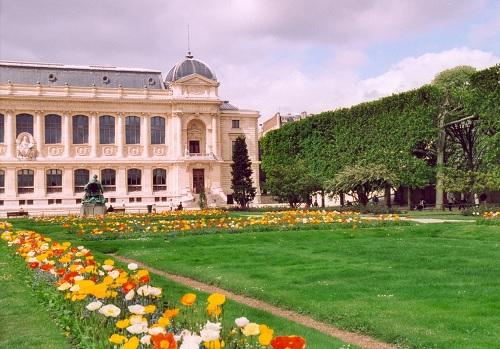 The Natural History Museum can truly be called Paris Dinosaur Museum. Its Paleontology and comparative Anatomy Gallery is a 540 million year journey and one of the highlights of the museum. It starts with the famous fossils from the Paleozoic Era from 540 to 250 million years ago, such as the gigantic Dunkleosteus. The Mesozoic Era, 250 to 65 million years ago, marks the golden age of the dinosaurs such as the Diplodocus, Iguanodon, Carnotaurus, Triceratops. One contemporary of these animals was Sarcosuchus, a giant crocodile with terrifying teeth. Alongside them, the mammals of the Cenozoic Era, 65 million years ago, reflect the evolution of biodiversity. They tell the epic tale of the equines from Hyracotherium, the proboscidians from Phosphatherium and the primates from Aegyptopithecus.

The collections are housed in a brick, metal and glass building built by architect Ferdinand Dutert, opened for the 1900 Universal Exhibition. 80 metres long, it is decorated with a large number of sculptures inspired by nature. 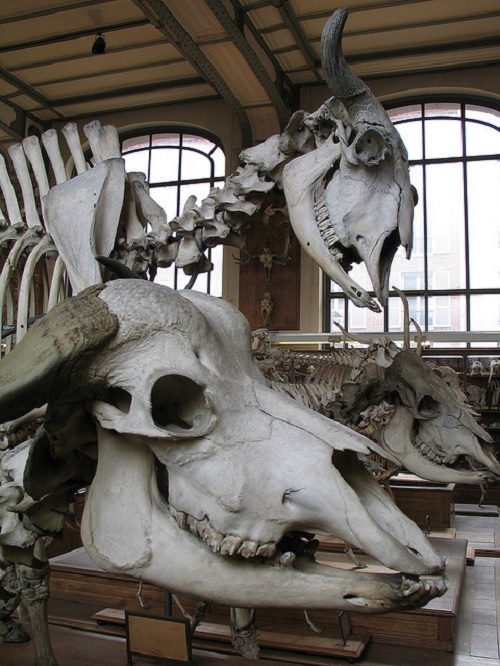 Paris Natural History Museum and its dinosaur collections fascinate both adults and kids.

Paris Natural History Museum and Jardin des Plantes are a great sight for adults with children. It is possible to walk on the Seine lower quays from Jardin des Plantes to Notre-Dame, one of best Paris walks. Check Seine river map. 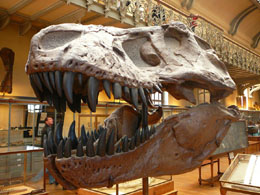 The dinosaurs are a group of animals, which today includes all birds. But in the past, there were many other dinosaurs, cousins ​​of birds, which could be very different and which have now disappeared. They are, however, known from their fossils. Among these extinct dinosaurs, many were unlike any other known animal on Earth; some were huge and it is even among dinosaurs that we find the largest land animals of all time. For a very long time, dinosaurs have been the dream of scientists and enthusiasts, who discover their fossils and who seek to know what these animals looked like.

They probably disappeared due to the fall of a meteorite near present-day Mexico, marking the end of the Cretaceous period and the Mesozoic era, or Secondary Era, the era of the dinosaurs. The first dinosaurs appeared around 220,000,000 (220 million) years ago, long before the first humans, who only appeared between 3.4 and 7 million years ago.

Paris metro: Gare d'Austerlitz, lines 5, 10, RER C
Locate the Museum on Paris map.
Closed on Tuesdays and 1st of May
Open 10am to 6pm 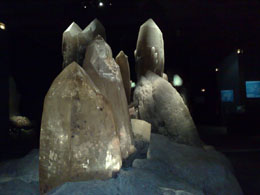 The Jardin des Plantes includes a zoo, one of the oldest zoos in the world created in 1794. It first housed the animals from the Ménagerie Royale de Versailles and the animals seized from fairgrounds. Over time, the zoo has extended itself with bears, big cats, reptiles and many other animals. With only 5.5 hectares of land to offer to various species, the Ménagerie takes care of small animals and continues to be a place of study and preservation. Visit the monkey and ape enclosure, the big cat enclosure and the vivariums, and take the time to admire some of the animals which are in danger of extinction or which no longer exist in the wild. Map of zoo.