The ecology conscious Paris Zoo, Parc Zoologique de Paris in French, is a top attraction for families in the City of Lights. Some may be disappointed by the fact that animals are not always visible, but that it in their own interest. Paris for kids.

The Parc Zoologique de Paris is located in Bois de Vincennes on the Eastern side of the city. It is divided into five geographical zones where over 1000 animals live in their original environment: Sahel, Patagonia, Europe, Amazonia and Madagascar. The most visible attraction is the 65 meters grand rocher, a rocky hill closed to visitors. 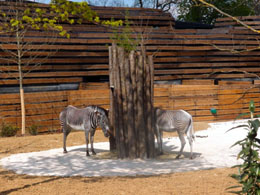 The Parc Zoologique de Paris is open all year round:
Winter hours: Monday of the third week of October to the last Sunday of March inclusive - From 10am to 5pm every day. Annual closure after the Christmas holidays for 3 consecutive weeks (weekends included) Summer hours: May 1 to August 31 - From 9.30am to 8.30pm every day - Every Thursday from mid-June to mid-August: 7pm to 11.30pm. Interseason hours: from the last Monday in March to April 30 and from September 1 to the second Sunday in October inclusive - From 9.30am to 6pm on weekdays - From 9.30am to 7.30pm on weekends, public holidays and school holidays in all areas. 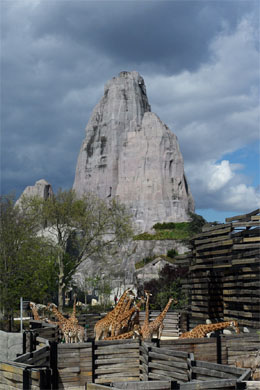 In 1793 the Jardin des Plantes, which was originally a botanical garden, became the first public zoo in France. Check Museum Paris. The compact 6.5 hectare (16-acre) area, with formal 18th century landscaping, was retained when the Jardin was renovated between 1918 and 1939. It holds some 1,100 specimens, including the rare Przewalski’s horse. The zoo has had excellent success breeding this and other species.

In 1934, de Vincennes the Parc Zoologique, a modern 15 hectare (37 acre) zoo with spacious natural habitat surroundings, was opened in a wooded area, the Bois de Vincennes. Its landmark was the Grand Rocher, a 65 metre high artificial mountain with winding paths for wild sheep.

The zoo has more than 1,000 specimens of nearly 225 species. It has had notable success in breeding okapis and giraffes, and it houses more than 80 species of birds and many mammals, including the rare Eld’s deer, for which the zoo maintains the international studbook. 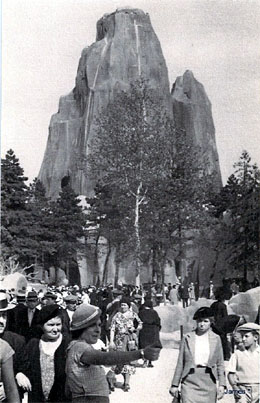 Inauguration of Zoo de Vincennes in 1934

We advise you to visit Thoiry Safari Paris near the city as an entertaining complement to Paris Zoo.

In Thoiry, girafes, elephants, lions in liberty amaze children. Tigers can be seen from a glass tunnel.

In the city, you can also visit the Jardin d'acclimatation, a lovely amusement park with a small zoo for kids. 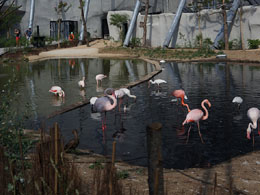