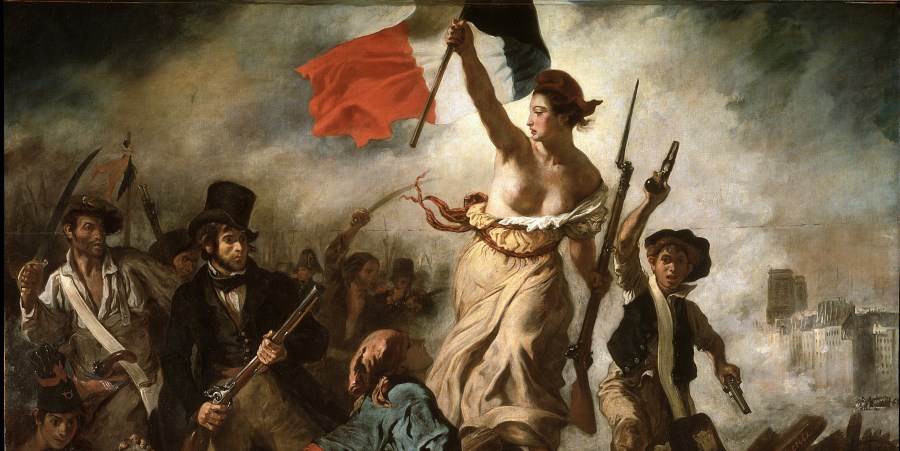 The Louvre Museum has a spectacular collection of Delacroix paintings, one of the highlights of the French painting department. Eugène Delacroix is ​​a famous French painter of the first half of the 19th century. Considered generally as the head of the romantic school and, as such, opposed to Jean-Dominique Ingres, also well represented in the Louvre, Delacroix said: "I am a pure classic". An apparent contradiction from which arises an art of exceptional richness and vigor, which subsequent generations will exploit. The poet Charles Baudelaire gave this definition of the painter: "The last of the Renaissance, the first of the Moderns. " From the beginning, Eugène Delacroix distanced himself from the academic training of the time, preferring to describe human passions in a realistic style, where the intensity of light and colors plays a predominant role, such as in the famous Liberty guiding the people. 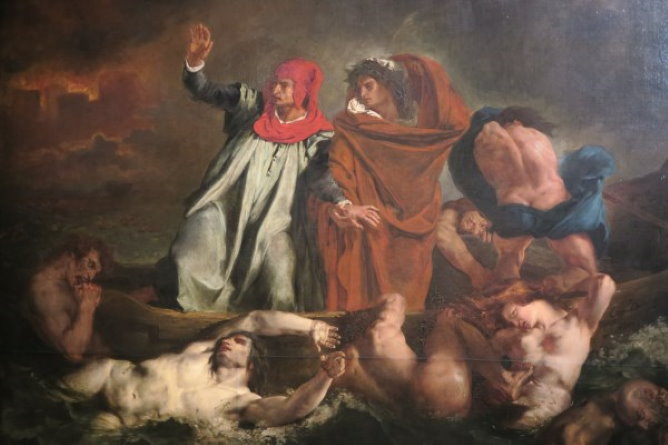 Besides the Louvre Museum, the memory of Delacroix survives in the Musée Delacroix in Paris Left Bank. The Musée Delacroix is a treasure nestled in the heart of Saint-Germain-des-Près behind a double wooden swing porch, opening onto a garden of nearly 500 m2. It was there that Delacroix chose to put his paintings and brushes in 1857, leaving his workshop north of Paris to get closer to Saint-Sulpice, the church where he decorated a chapel. Delacroix lived there for 6 years, until his death in 1863. If his admirers lament that he has no street in his name, they earn a nice consolation with this workshop-house transformed into a museum. It was not won: building, apartment, workshops, everything could have been demolished after the death of the painter, without the pugnacity of his artistic heirs and the first of them, the painter Maurice Denis (1870-1943 ), founder of the Society of Friends of Eugène Delacroix in 1929. Saved from sacrilege, partially listed in the inventory of historic monuments, the place became a museum attached to the Louvre. Now completely renovated, it is one of the least known and nicest museums in Paris. 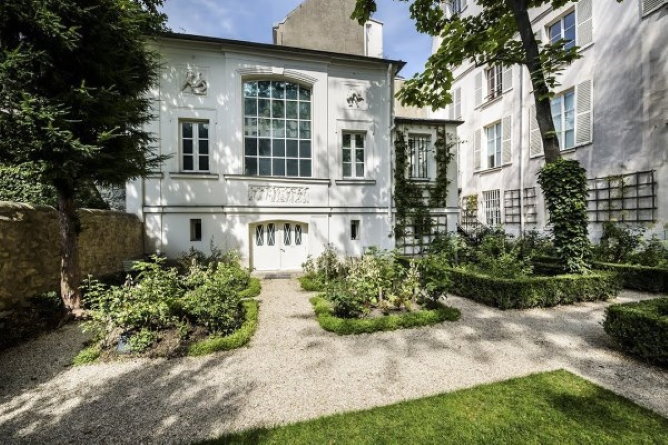 The Saint-Denys du Saint-Sacrement church in Le Marais hosts a masterpiece by Eugène Delacroix, a superb Pietà from 1840, also known as "Deposition of the Cross" in the Sainte-Geneviève chapel where it is exhibited in a gilded wooden frame. The Virgin Mary, whose wide open arms seem to draw a cross, radiates as the body of the livid Christ carried to her, partly masks her robe. In their red robes, the disciples seem to revolve around this weeping mother figure. 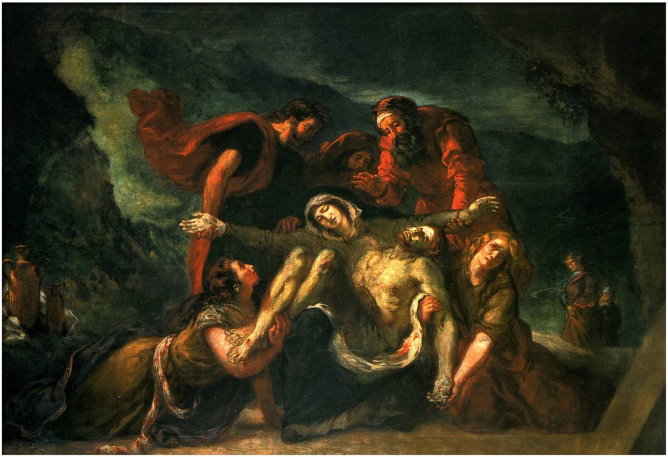 Delacroix was born near Paris in 1798 of Victoire Œben, daughter of the cabinetmaker of King Louis XV, and Charles Delacroix, minister, ambassador and prefect. The public rumor told him the natural son of Talleyrand, the famous minister who will attentively follow the beginnings of his career, introducing him to various salons, including that of Baron Gérard, frequented by both artists and prominent politicians. Eugène Delacroix spent his first years between Marseille and Bordeaux, where his father was prefect, a key civil servant in the French state. When his parents died prematurely, he entered a precarious period, which encouraged him to devote himself to his passion for the arts. He attended the classes of painter Pierre Guérin at Beaux-Arts, and became friend with Théodore Géricault, another famous French painter. From his first exhibition at the Salon onwards, Eugène Delacroix suffered criticism from the experts while garnering the praise of state institutions, who regularly bought his works, such as "Dante and Virgil in the Underworld" in 1822. This first shipment to the Salon revealed the powerful originality of his talent. Delacroix will always have a predilection for this dull range of reds and greens and will often resume the theme of the boat oscillating on the night water and that of the city burning on the horizon.

The death of Géricault, in 1824, left him undisputed leader of the young romantic school. This situation was consecrated by the presentation at the Salon of 1824 of Massacres in Scio, now in Louvre Museum, which arouse both praise and violent criticism. European opinion was then upset by the misfortunes of the Greek insurgents against the Ottomans. 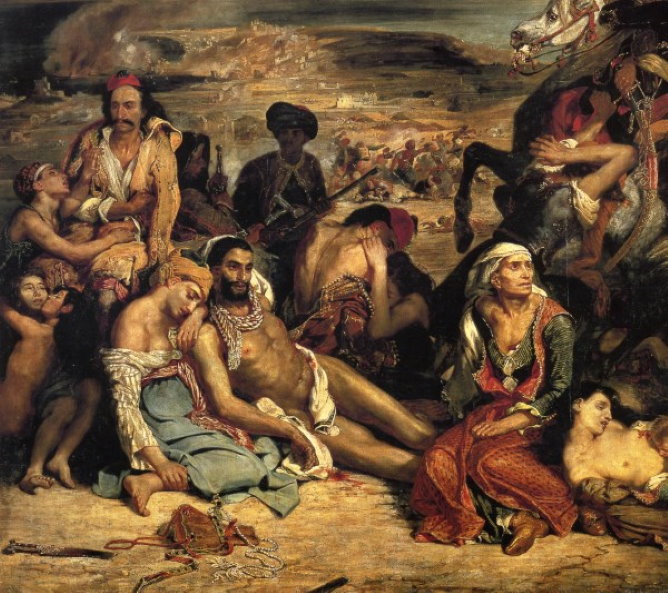 The major painting of this period, the Death of Sardanapalus, now in Louvre Museum, caused an unprecedented scandal at the moment when the romantic youth was upset by the representations of Shakespeare. "My massacre number two," said the painter to describe this swirling composition with dominant reds, which sublimated the horrible pleasure of death. 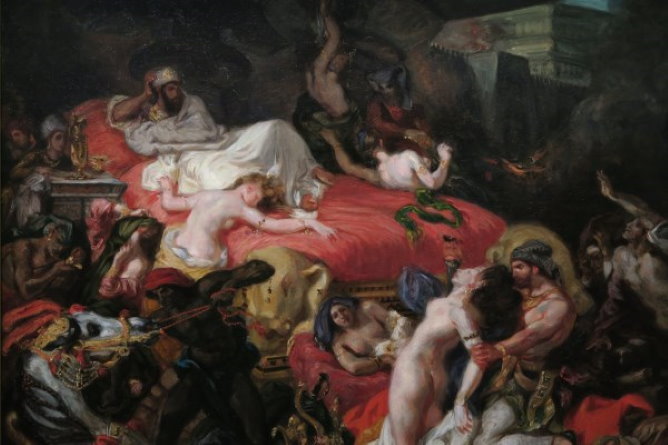 Delacroix expanded his activities to lithography, and performed many portraits of his friends, such as George Sand, the writer, or Frederic Chopin, the music composer, both living in Paris. He achieved great success at the first World Fair in Paris, with "The Hunting Lion" (1855). From 1834 onwards, Eugène Delacroix devoted himself to the decoration of palaces and state residences, like the Louvre in 1849. Elected to the Institute in 1857, he died of a long illness in 1863. With his errors and defects, Delacroix remains the most important French painter of the 19th century. The mastery in the effects of light, the skilful and harmonious arrangement of the lines, the splendor of the decor seize you. It is with justice that he has been called the master of the French school. 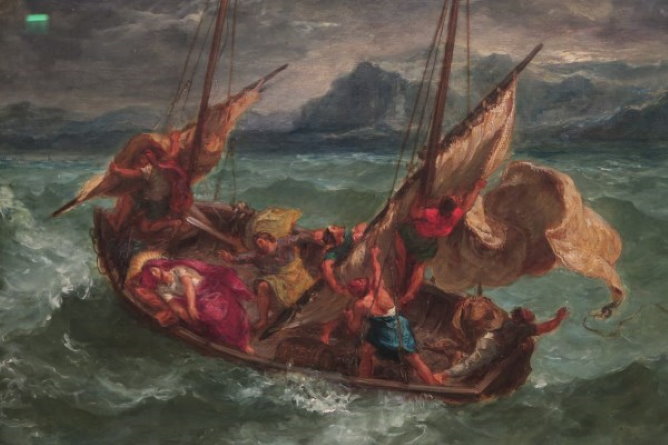