Chartres, the Gothic Cathedral near Paris

Chartres Cathedral is one of the most spectacular and famous places in France. Mostly constructed between 1193 and 1250, this Gothic cathedral is in an exceptional state of preservation. The majority of the original stained glass windows survive intact, while the architecture has seen only minor changes since the early 13th century. Famous places in France.

Chartres Cathedral is a UNESCO world heritage monument and one of the world's most beautiful churches. In the heart of a lovely old city 90 kilometers south west from the capital city, Chartres Cathedral is devoted to the Virgin Mary. It could be the mystical experience of your life. You can go from Paris to Chartres by train (check train schedules and buy tickets

From Easter until late October, there are interesting guided tours in English every day except Sunday at 12.00 am and 2.45pm. All tours leave from the gift shop inside the north tower of the cathedral. Guided tours are not given during services. Check at +33 (0)2 37 21 75 02.

Many prilgrims visit Chartres Cathedral to pray the Virgin, the mother of Christ, a tradition dating back to the 9th century. 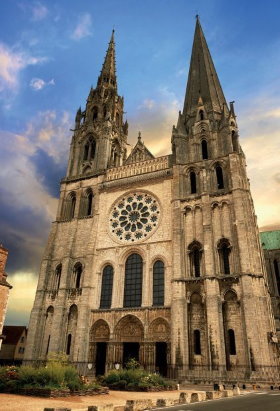 Chartres Light Show has become one of the major events in the city, through its spectacular night tour, and reveals monuments and major attractions highlighted and put in music. The Lights of Chartres event has been animating the city for the past 14 years. The first Celebration of Light took place in 2002 and quickly became one of the city's most remarkable events, attracting tourists from around the world. Approximately one million visitors are expected each year.

24 sites of this beautiful city are illuminated each night: Notre Dame Cathedral, the old Episcopal Palace, churches, bridges, wash houses at the edge of the Eure river, the library, streets and squares of the upper town. Web site. 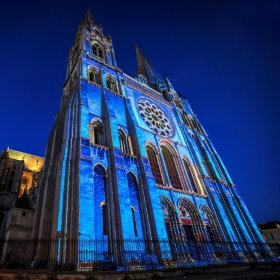 Inaugurated in 1260, Chartres Cathedral marks the high point of French Gothic art with its nave, porches adorned with sculptures from the middle of the 12th century, and 13th-century stained-glass windows. Chartres Cathedral is fortunately also well preserved. Chartres Cathedral was not looted during the 1789 French Revolution. The restorations have not altered its beauty. Its three rose windows are originals. Chartres Cathedral has been a major Virgin Mary pilgrimage destination since the early Middle Ages. 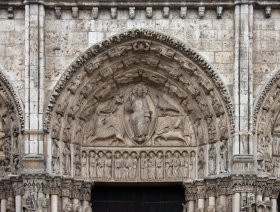 The royal portal of Chartres Cathedral

Chartres Cathedral is open from 8.30am. to 7.30pm. every day of the year. It is open until 10pm. on Tuesdays, Fridays and Sundays in July and August.

Chartres Cathedral architecture and centuries of fervent devotion make up for an atmosphere that impresses religious and non religious visitors (picture).To participate or see the Cathedral differently, go to a mass or to vespers. See mass and vesper times.

We recommend to stay overnight in Chartres. With excellent restaurants in town, a fabulous program altogether. 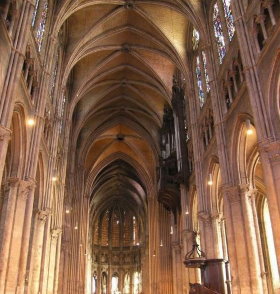 Nave of Chartres Cathedral near Paris

The glory of Chartres is the Veil of Our Lady, one of Christendom’s most holy relics, and the reason the Cathedral was built.  It was discovered, along with the true Cross, by St. Helena, and later given to Charlemagne by the Byzantine Empress Irene. It was to venerate this holy veil that the pilgrims of the Middle Ages came and turned Chartres into the fourth most popular place of pilgrimage in Christendom. The pilgrimage was rejuvenated in early 20th century when a then-agnostic poet named Charles Péguy took it upon himself to walk from Paris to Chartres in search of the intercession of the Mother of God. Close to 20 000 pilgrims participate to the Notre Dame de Chrétienté pilgrimage every year.

A poem about Chartres pilgrimage by Charles Péguy 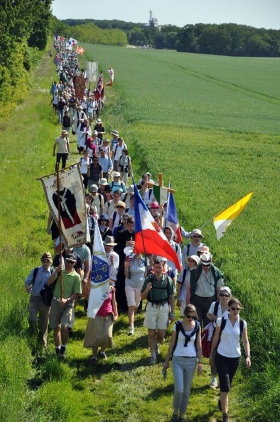 Apartments and hotels in Chartres on the map

The relic formerly known as the "shirt" and now known as the Veil of the Virgin was donated to the Church of Chartres around 876 by King Charles the Bald. Immediately, its fame contributed to the development of the Chartres pilgrimage. The Virgin was said to have worn this garment on the day of Christ's birth. Chartres therefore became the place among all to pray about the incarnation - the coming of God to earth. The "holy shrine" was kept in the altarpiece of the high altar; the pilgrims acceded there to venerate it, prayed at length and brought back from Chartres, small badges in the shape of "shirt". It was in the 12th and 13th centuries that the pilgrimage to Chartres seems to have reached its greatest fame. Guibert de Nogent said that the name and the relic of the Virgin were the object of veneration there by almost everyone in the Christian world. In a document from 1260, Pope Alexander IV attested that devotion to Mary attracted an innumerable multitude of faithful to Chartres. At the Assumption and the Nativity of the Virgin, the pilgrims spent the night in the cathedral. The Chartres sanctuary enjoyed great fame in the 17th and 18th centuries. Among the illustrious pilgrims who came to pray there, were Saint Francis de Sales and Saint Vincent de Paul, The Revolution temporarily put an end to the practices of pilgrimage. The crypt was not restored to its destination until 1855 and was not fully restored until 1860. From this period dates the rebirth of the pilgrimage, which immediately took on an unimaginable scale. In 1873, for two days, fifty thousand faithful were welcomed to Chartres for a national pilgrimage.