The Picasso Museum in Antibes is one of the top museums in the French Riviera. Pablo Picasso lived 26 years there after World War II and donated 23 paintings to be housed in the lovely Grimaldi Museum on Antibes seafront. French Riviera.

Pablo Picasso (1881-1973) arrived in Antibes in the French Riviera in September 1946. Picasso painted three months in Antibes 12th century Castle at the invitation of Romuald Dor de la Souchère, the director of the Grimaldi Museum housed in the castle.

Picasso produced famous works in Antibes including "La joie de vivre". In 1947, Picasso moved to Vallauris near Antibes. Picasso stayed in the French Riviera until his death in Mougins, a village close to Antibes, in 1973. 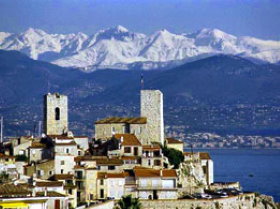 Antibes is one of the top French Riviera resorts

The Picasso paintings are the heart of the Picasso Museum. They are complemented with works by Nicolas de Staël and Hans Hartung among other great 20th century artists. The Picasso Museum lovely setting and collections are a must for art lovers. 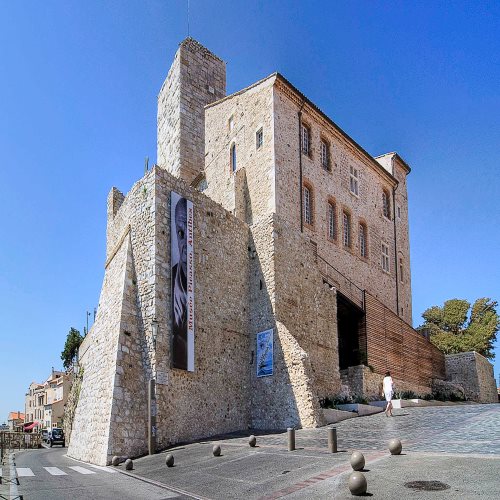 Picasso Museum Antibes dates back to the 12th century

Antibes is a famous seaside resort of the French Riviera. See the Picasso Museum, the Foundation Hans Hartung, the old Antibes village with its market and Cap d'Antibes.

Close to Léger Museum in Biot, Cannes, Nice and other French Riviera sights, Antibes is a great destination for a week-end or a week. Fly Air France or Easyjet to Nice, then rent a car. Locate Antibes on French Riviera map.

There are many excellent hotels and apartments in Antibes. 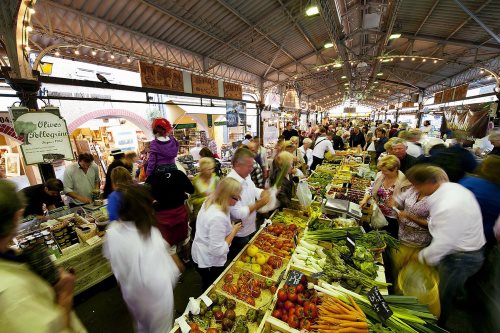 Created in 1946 in Antibes and exhibited in Picasso Museum Antibes, le Joie de Vivre is a unique pictorial work in panoramic format. With the difficulty of supply at the end of the war, Picasso used what he found: paint for boats and plates. Technically, the work is made with unusual materials, industrial oil painting on fiber cement board. These materials give a fluid paint, visible matter (brushstrokes) showing all the energy of the execution. The general meaning is that of the classic theme of a bacchanal, happiness linked to the found peace. Two musicians, a centaur on the left and a faun on the right, play aulos and diaula (a kind of single or double oboe from ancient Greece). A naked nymph is playing the tambourine and dancing with two kids. On the left, a sailboat is sailing towards the outside of the painting. On the right, a vine asserts the bacchanal. The work presents three emblematic elements specific to Dionysos: the goats that refer to the Dionysian animal; the aulos and the percussion which are used in the dionysies, and the dance of the nymph.

Picasso and the French Riviera

Pablo Picasso lived in the French Riviera from 1946 to 1973. During the last twenty-seven years of his life, the artist produced many works. Between Antibes and Mougins, via Cannes or Vallauris, the Spanish exile had found a second home. A land that sheltered the loves of the man, and the moods of the artist. From 1919, the Côte d'Azur was a sweet holiday resort for Picasso, who stayed in Saint-Raphaël during the summer, in the company of Olga. In 1923, the wild setting of Cap d'Antibes guided his brush dipped in the colors of ancient mythology (La Flûte de Pan). A year later, he took advantage of his summer stay at the Villa Vigie in Juan-les-Pins to sketch his Book of Abstract Drawings and paint Paul as a Harlequin. And while the brown plague threatened Europe, it was still in Cannes that Picasso spent his holidays with Olga and his son Paulo in 1933.

With his daughter Maya, born of his affair with Marie-Thérèse Walter, he found refuge in Juan in 1936, while Dora Maar joined him in Mougins during the month of August, then in July 1938. After Guernica, Picasso definitively turned his back on Franco's Spain to settle on the Cote d'Azur in 1946. Symbol, this fresco War and Peace (1952), painted in the Romanesque chapel of Vallauris. Previously, it was on the maritime ramparts of Antibes that Picasso, 55, had established his fame and his talent. In the studio offered to him by the curator of the Grimaldi museum, now the Picasso museum. In two months, the painter created 70 works there, as if to capitalize before winter. Pablo Picasso moved into the Villa Californie, which overlooks the Croisette in Cannes (1955). In June 1961, he moved to Mougins. He died there of a pulmonary embolism in 1973.