As in many large cities around the world, most very affordable restaurants in town are Asian or oriental. They change rapidly making it hard to propose a selection.

There are many good and affordable vietnamese and chinese restaurants around avenue d'Ivry (map) in the 13th arrondissement chinese neighbourhood.

There are many affordable greek and lebanese restaurants around rue Saint-Séverin (map) near Notre-Dame Cathedral and Rue Mouffetard near Le Panthéon. 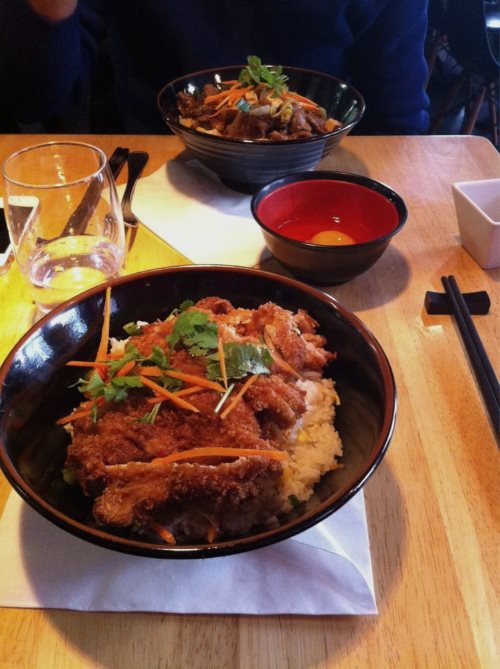 Higuma is a well known institution in town. Two very cheap and simple restaurants near the Opéra and Le Louvre, serving traditional Japanese food, such as ramen, donburi, itamemono, gyozas and ramen. No sushis or sashimis. 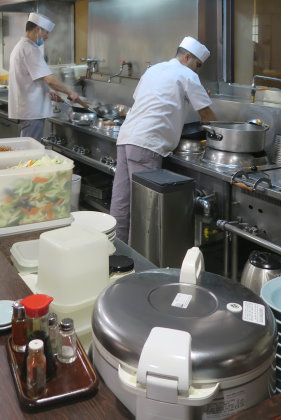 If you would like to take your time and go off the beaten tourist track, rush to Le Petit Plaisir. This is Paris at its best. 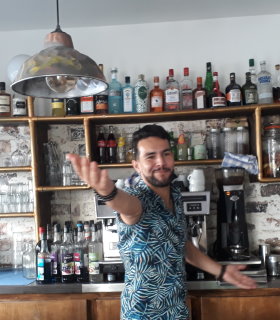 Yakob will welcome you at Le Petit Plaisir

The Café du Commerce serves a selection of authentic recipes for you to discover including their poireau vinaigrette (leeks in vinaigrette), oeuf mayonnaise (eggs and mayonnaise) and of course, their quality Limousine meat. 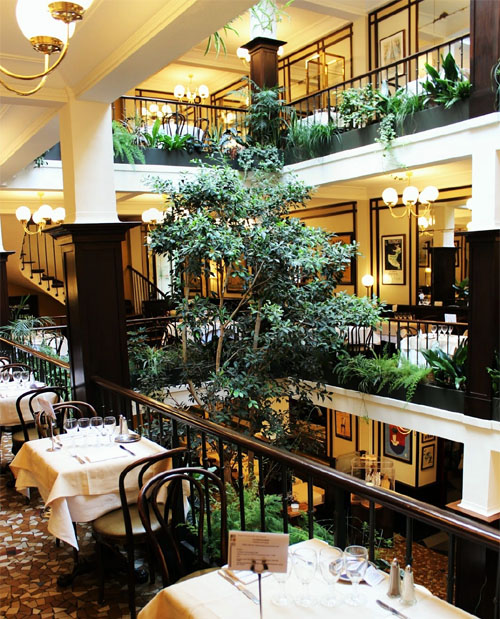 Café du Commerce is a cheap and quality restaurant

The Champs-Elysées have few affordable restaurants and the value for money is usually low. It is therefore worth mentioning l'Alsace, a brasserie that serves an affordable set menu despite the astronomic rents. Like all brasseries in town, l'Alsace serves sauerkraut, seafood, beer and Alsace wines. The restaurant is open 24/7 seven days a week. The two course menu at 19.90 euros is served for lunch and dinner and the quality is excellent. There is also plenty of choice à la carte, but it will naturally cost extra money. 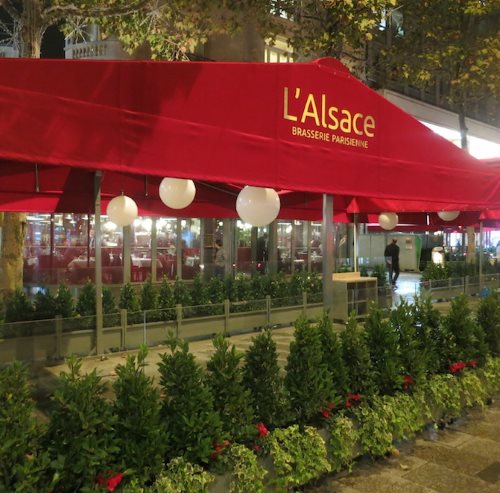 L'Alsace is an affordable brasserie in Champs-Elysées

At walking distance from Champs-Elysées, rue de Ponthieu has takeouts and affordable restaurants stormed by young white collars at lunchtime. The value for money is much better there than in Champs-Elysées. Locate rue de Ponthieu on Paris map. Metro: Franklin-Roosevelt station on line 1 and 9.

L'Italien is a rare, tasty and affordable Italian restaurant near Champs-ELysées.

Weito is a new affordable japanese restaurant with interesting set menus at lunch and dinner times. 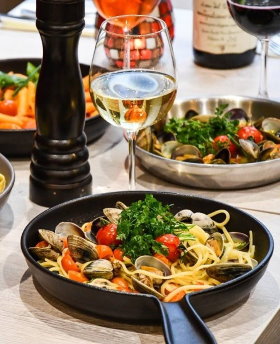 Parisians like us can miss La Tourelle for years. The local who recommended it to us hesitated. If more people know the place, it could change the wrong way. No web site. No thrills. They focus on food the old way and serve delicious home made French dishes at more than affordable prices for this district. The two course set menu costs 19 euro.

For more than 100 years, Café de la Tourelle has been a neighborhood restaurant for working Parisians. While the place has changed hands a few times, most recently in 2000, nothing much has changed. There is nothing hip about La Tourelle. No trendy menu, no cute server, no ﬂoral arrangement. Even the address, though in a highly touristic district near Notre-Dame, is on a quiet side street off the busy Boulevard Saint-Michel. Get in and try it. Metro: Saint Michel line 4. Map. Close to Notre-Dame. 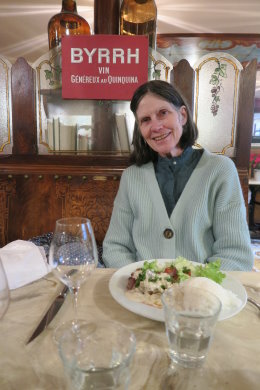 La Tourelle is an authentic and cheap French restaurant

Now listed as an historical monument, Bouillon Racine offers an immersion in the Paris of the 1900s. Where food is concerned, the chef Alexandre Belthoise has selected a subtle blend of modern day and more traditional dishes. Two course set menu at lunchtime during week for 19.5 euros. 3 course menu at 35 euros for lunch and dinner. Lunch review. 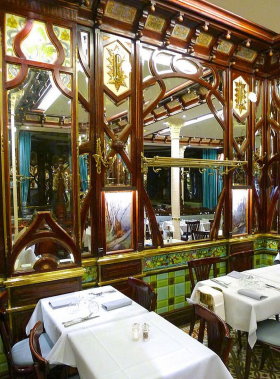 We would like to be able to recommend many Le Petit Olivier, but there are few in central districts. In the lovely, trendy and expensive rue du Cherche-midi, this tiny and packed restaurant serves a good dish of the day and a desert for 10 euros. The chef, who also does the service, cooks traditional French disches, like baked sardines, smoked sausage and lentils or black pudding as daily specials. On the service side, no fuss. The best way to choose your dessert? “You get up, you look in the fridge. “Indeed, on the other side of a small corridor, banana chocolate fondants and speculoos mousse are waiting for gourmets. "The spoons are next," calls out the chef. For a bit, we would almost ask the neighbors if they want us to bring them something. Unbeatable. No web site. No reservation. 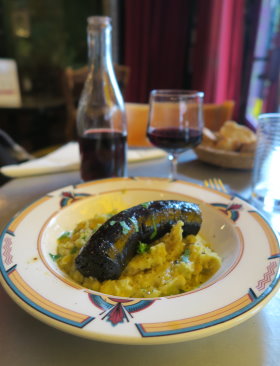 The chef, Gil Rosinha, creates the dishes himself depending on the products which are available. The dishes are all thought out and diverse. They vary from a simple salad and soup of the day to fois gras in the style of pot au feu, passing by roasted duck breast with vanilla potato puree accompanied by a mango and ginger ratatouille, to a winter root vegetable selection cooked in butter, or a black angus burger. The wine list is huge, including a good range of reds, whites, sparkling wines and roses. Most are French, with the exception of a few specially selected Spanish wines. Metro: Hotel, de Ville station, line 1. Map. 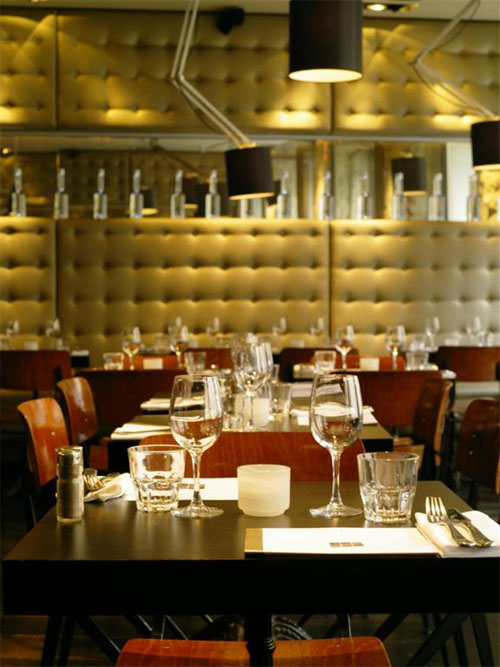 In between Le Marais and Opéra Bastille both at walking distance, Bofinger is one of the best Paris brasseries.

The history of Bofinger dates back to 1864, when Frédéric Bofinger opened this brewery. It was the first Parisian establishment where draft beer was served, hence its name Brasserie. In 1919, Brasserie Bofinger adorned itself with an exceptional Art Nouveau setting.

Bofinger serves exemplary seafood, one of the best sauerkraut in Paris, and other tasty dishes and desserts. Extensive wine list from Alsace and all regions of France. Courteous and efficient service. 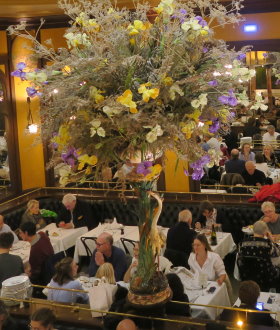 Bofinger is an affordable brasserie