Paris catacombs are the dark and underground side of the City of Lights. Beneath this bustling 12 million people city lies a dark subterranean world holding the remains of 6 million of its former inhabitants. These are the Catacombs, a network of old caves, quarries and tunnels stretching hundreds of miles, lined with the bones of the dead. Places to visit in Paris.

The Catacombs are an underground ossuary. Located Place Denfert Rochereau in the Left Bank, south of the former city gate near Montparnasse, the ossuary holds the remains of 6 million people. It fills a section of caverns and tunnels that are the remains of the city' stone mines. The Catacombs are definitely an out of the beaten track sight in the city. You may not want to do a long walk underground past piles of bones. Many people do. After two to three hour waiting time, the tiny entrance gives you access to a subterranean city with her many miles of mining tunnels. A visit you will not forget.

The name Catacombs was given to this ossuary in reference to the Catacombs of Rome, an ancient cemetery situated not far from the Appian Way. The Cemetery of the Innocents near Saint-Eustache had been in use for nearly ten centuries and had become a source of infection for parisians. The city council decided in 1785, to prohibit further use of the Cemetery and to remove its contents. Disused quarries were chosen to receive the remains. This underground ossuary became an attraction in early 19th century and has remained so until today. 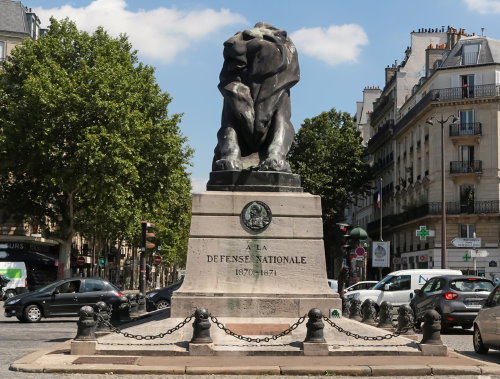 Visits from Tuesday until Sunday from 10am till 8.30pm. Last admission 7.30pm. Catacombs are open July 14th, November 1st and 11th. Closed every Mondays and certain holidays like May 1st and August 15th.

Visitors are restricted to 200 at any time. Admission may be delayed for a short time during busy periods. The distance covered is 1.5 km. Duration of the tour: 45 minutes. There is no cloakroom facilities available. Animals are forbidden. 130 steps to go down and 83 steps back up to street level. Temperature: 14°C. Locate Paris Catacombs on Paris map. Paris metro: Denfert Rochereau station (line 4, 6). Entrance fee: 10 euros. Tel : +33 (0)1 44 59 58 31 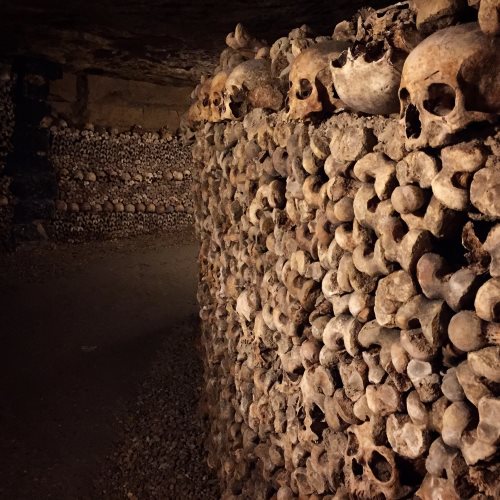 Place Denfert Rochereau is an out of the beaten track city district where you will see almost no tourists.

Complement your visit to the Catacombs with a walk in Parc Montsouris (Paris map), a lovely city park. Le Pavillon du Parc Montsouris in the park is a great restaurant with a terrace in the summer. Rue Daguerre (Paris map) is a market street with excellent foodstores and affordable French restaurants. 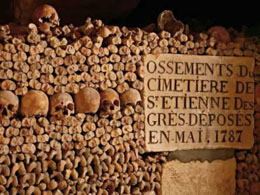