Italian renaissance paintings are the greatest treasure of the Louvre Museum in Paris. They fully ocupy the huge and beautiful Galerie au bord de l'eau and adjacent rooms. Mona Lisa by Leonardo da Vinci and the spectacular Wedding in Cana by Veronese are two of the most famous Italian treasures of the museum. Detailed information on Louvre Museum.

The collection of Italian renaissance paintings of the Louvre Museum is one of its glories. Many famous paintings have been acquired over centuries as the result of the passion of the Kings and Queens of France for Italian Renaissance art.

The acquisitions and bequests have added over the years many masterpieces to the already world class collection.

Leonardo da Vinci, with Mona Lisa, Raphael, Titian and Veronese with Wedding in Cana above are among the best represented Italian painters in the Louvre Museum. Locate the Italian painting department on Louvre Museum map PDF. The Louvre is large. We recommend a guided visit. 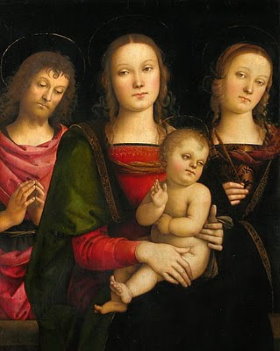 Sandro Botticelli (1445-1510), an Italian renaissance painter, was one of the most acclaimed painters in Italy. He took part in the decoration of the Sistine Chapel in Rome and earned the patronage of the leading families of Florence. The fresco Venus and the Graces is from the Villa Lemmi, a property near Florence that belonged to the Tornabuoni family, allies of the Medici. The work may have been commissioned from Botticelli to mark the marriage of a member of this Florentine dynasty. Escorted by the three graces, Venus is shown placing a gift in the cloth container held out to her by the bride-to-be.

The Louvre is open 9am to 6pm all days except Tuesdays, January 1st, May 1st, November 11th, December 25th. It is open until 9.45pm on Wednesdays and Fridays. Rooms begin closing 30 minutes before museum closing time.
Full-day Louvre Museum entrance fee: 15 euros. From October to March: access is free for all visitors on the first Sunday of each month. Buy Museum tickets (17 euros online). 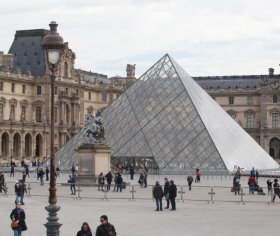 Apartments and hotels near Louvre Museum on the map 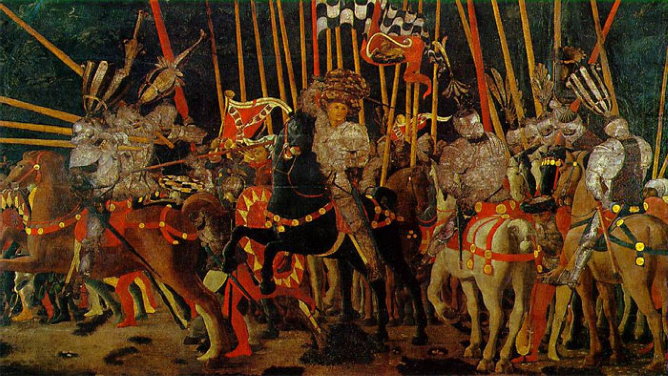 The Battle of San Romano is one of the most famous Italian Renaissance paintings. Paolo Uccello (1397-1475) was born Paolo di Dono and nicknamed Uccello (Italian for "bird") because he frequently sketched them. He is one of the great masters of the Italian Renaissance. His Battle of San Romano was painted on three panels now located in three different art museums, the National Gallery of London, Uffizi in Florence, and the Louvre. Together, they depict the legendary battle of 1432 between Florence and Siena. The three panels were listed in 1492 inventory of the Medici Palace in Florence. 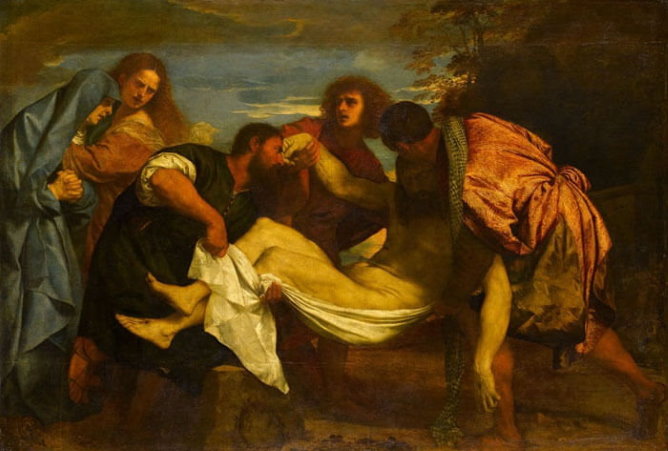 The Entombment of Christ - Titian - Louvre

Titian (Tiziano Vecellio) was undisputedly one of the great masters of the Venetian Italian Renaissance in the 16th century. He studied under two other great masters: Bellini and Giorgione, and built on the skills he learned to become the most influential painter to come out of the Venetian school. Titian became the official painter of the Venetian Republic in 1516. The subject of The Entombment of Christ, an Italian Renaissance masterpiece, is the following: Pontius Pilate has granted Joseph of Arimathea permission to take Christ's body down from the cross for burial. He is aided by Saint John, who is holding Christ's hand, and by Nicodemus, with his back to us. He is enveloping the body in a white shroud before it is taken to the tomb. The Virgin Mary is present, supported by Mary Magdalene in her grief. This moving painting was originally in the ducal palace in Mantua. It may have been painted around 1520 for Isabella d'Este or her son Federico II Gonzaga.

The Louvre has four paintings by Lorenzo Lotto (1480-1556), a Renaissance Venetian painter for his frescoes in Italy.

One of them, Christ Carrying the Cross, dated 1526, has a unique history. In 1980, the nuns of the Congregation of Saint Charles Borromée in Le Puy en Velay sold this small painting (66 X 60 cm2) with the old items contained in their attic to a second-hand dealer for a total sum of 400 Francs. An antique dealer bought it back for 4000 Francs, cleaned the canvas, discovered a signature - Laur Lotus 1526 - had it restored and went to Italy to have an expertise carried out. Professor Zampetti, a specialist, tells him that he is the proud owner of Lotto's "Carrying of the Cross". In 1982, Le Louvre acquired the painting for 3,250,000 Francs. 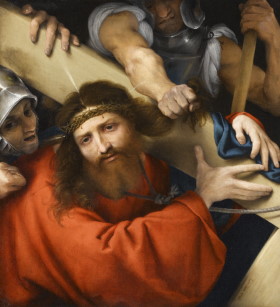 The 1535 painting a Woman caught in adultery by Lorenzo Lotto (1480-1557) illustrates the moving gospel by John.

"The scribes and Pharisees brought a woman along who had been caught committing adultery; they said to Jesus, 'Master, this woman was caught in the very act of committing adultery, and in the Law, Moses has ordered us to stone women of this kind. What have you got to say?' Jesus said 'Let the one among you who is guiltless be the first to throw a stone at her.'" A woman caught in adultery by Lorenzo Lotto. 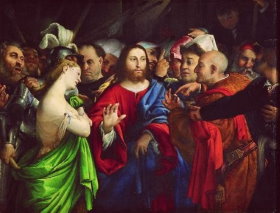 The pilgrims at Emmaus - Titian - Louvre

In the Gospel according to Saint Luke (24, 13-35), Jesus appears on the day of his resurrection, during a meal at Emmaus, to two disciples, Luke and Cleophas, who recognize him by the breaking of bread. In the Titian painting "The pilgims at Emmaüs", the serene face of Christ appears above a white tablecloth prefiguring the altar of Mass: the symbols of the Eucharist realistically compose one of the most beautiful still lifes in Venetian renaissance painting. The pyramid of salt also evokes the role that Jesus assigns to his disciples: "You are the salt of the earth" (Gospel according to Saint Matthew, 5, 13).

"Now that same day two of the disciples were going to a village called Emmaüs, about seven miles from Jerusalem. They were talking with each other about everything that had happened. As they talked and discussed these things with each other, Jesus himself came up and walked along with them; but they were kept from recognizing him. He asked them, “What are you discussing together as you walk along?” They stood still, their faces downcast. One of them, named Cleopas, asked him, “Are you the only one visiting Jerusalem who does not know the things that have happened there in these days?” “What things?” he asked. “About Jesus of Nazareth,” they replied. “He was a prophet, powerful in word and deed before God and all the people. The chief priests and our rulers handed him over to be sentenced to death, and they crucified him; but we had hoped that he was the one who was going to redeem Israel. And what is more, it is the third day since all this took place. In addition, some of our women amazed us. They went to the tomb early this morning but didn’t find his body. They came and told us that they had seen a vision of angels, who said he was alive. Then some of our companions went to the tomb and found it just as the women had said, but they did not see Jesus.” He said to them, “How foolish you are, and how slow to believe all that the prophets have spoken! Did not the Messiah have to suffer these things and then enter his glory?” And beginning with Moses and all the Prophets, he explained to them what was said in all the Scriptures concerning himself. As they approached the village to which they were going, Jesus continued on as if he were going farther. But they urged him strongly, “Stay with us, for it is nearly evening; the day is almost over.” So he went in to stay with them. When he was at the table with them, he took bread, gave thanks, broke it and began to give it to them. Then their eyes were opened and they recognized him, and he disappeared from their sight. They asked each other, “Were not our hearts burning within us while he talked with us on the road and opened the Scriptures to us?” They got up and returned at once to Jerusalem. There they found the Eleven and those with them, assembled together and saying, “It is true! The Lord has risen and has appeared to Simon.” Then the two told what had happened on the way, and how Jesus was recognized by them when he broke the bread."