Dutch paintings by Rembrandt and Vermeer are well represented in the Louvre. In the Emmaus pilgrims, Rembrandt focuses on the presence of Jesus. A moment before, Jesus looked like an ordinary man about to break bread with pilgrims. Now he is the resurrected Christ whose presence fills the room. Without any distracting details, Rembrandt convinces us that we are witnessing the moment when the eyes of the pilgrims open and they recognize him. Louvre Museum facts.

Complementary to the great collections of Dutch painters in the Rijksmuseum, Amsterdam, and the Mauritshuis, The Hague, both in the Netherlands, the collection of Dutch paintings of the Louvre Museum is of very high quality.

The collection is worth your time as part of a Louvre Museum visit. We recommend you a guided visit of the museum. 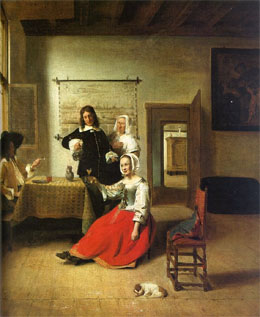 Vermeer (1632 – 1675) was a Dutch painter who specialized in middle-class domestic scenes. Vermeer, a moderately successful painter in Delft during his lifetime, is now considered one of the greatest painters of all times.

Vermeer's Astronomer should not be interpreted as a portrayal of modern science. In Vermeer's time, all natural phenomena had a moral significance which implied God who had created nothing without a purpose.

The many Dutch 17th-century paintings representing astronomers reveal the interest in the study of the universe. The Astronomer was painted while Sun King was building an observatory in Paris (1667-72). In 1668, the young Isaac Newton improved the design of the reflecting telescope. 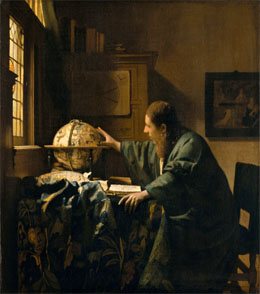 A young lacemaker bends over her work, holding the bobbins and pins needed for her work. Sitting close to the foreground, behind a lacemaking table, the lacemaker devotes her attention to this activity, while the viewer peers in with equal intensity. The woman is not wearing work clothes.

The marvelously colored cushion on the left is a sewing cushion, used to store sewing materials. The concentration of the model and the play of colors against the light gray background make this one of Vermeer's masterpieces. Renoir considered this masterpiece by the Dutch painter, which entered the Louvre in 1870, the most beautiful painting in the world, along with Watteau's Pilgrimage to the Island of Cythera, also in the Louvre.

Rembrandt (1606 - 1669) is usually regarded as the greatest Dutch painter of his time. He worked first in his native Leiden and, from 1632 onward, in Amsterdam.

Rembrandt painted this self portrait at the easel at age 54, nine years before his death. The setting is the quiet enclosure of an interior. The artist's shadow shows little space between himself and the wall, suggesting there is only room enough for Rembrandt and his easel. A narrow field of light barely covers the scene, and shrinks the space within the frame to add intimacy. Rembrandt focuses our attention with a light source entering the frame. In this self-portrait, he intensified the prominence of the white cap above every other object in the frame. This modest symbol of Rembrandt's craft becomes itself a light source of almost spiritual dimensions. This suggests that it is through the act of painting that Rembrandt aspires to transcendence. 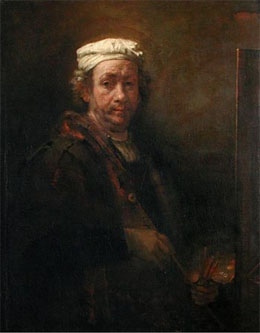 In the Bible old testament, Bathsheba was the wife of a general of King David's army. The King, upon seeing Bathsheba bathing, had her led her into adultery. In this painting, Rembrandt focuses the scene on the bath of Bathsheba. She is deeply disturbed by the royal message.

Rembrandt painted Bathsheba from a live model. The opulence of this life size nude is exceptional in the Dutch painter's work: the nakedness of a beloved body, each fold of its triumphant flesh detailed, its eroticism highlighted by the transparent drapery and jewelry. This sensuality contrasts with the young woman's profound sadness. 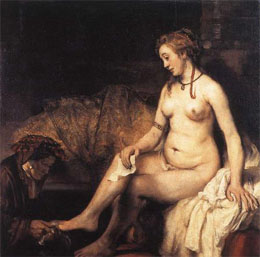 The Louvre is open 9am to 6pm all days except Tuesdays, January 1st, May 1st, November 11th, December 25th. It is open until 9.45pm on Wednesdays and Fridays. Rooms begin closing 30 minutes before museum closing time.
Full-day Louvre Museum entrance fee: 15 euros. From October to March: access is free for all visitors on the first Sunday of each month. Buy Museum tickets (17 euros). 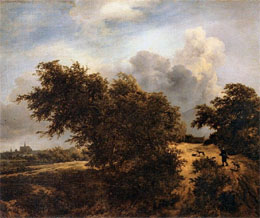 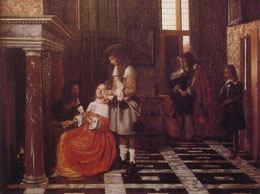