The Palais des Congrès is a famous congress center and concert venue in the 17th arrondissement of Paris. Nearby the venue are Bois de Boulogne, La Defense, the Champs Elysees and the affluent city of Neuilly-sur-Seine. Paris business.

Paris Congress Center, known as Le Palais des Congrès de Paris, is the venue of many international congresses, conventions and conferences. Paris Congress Center is half way between La Defense Business district and Arc de Triomphe, not far from many Paris sights by metro.

It is a good idea to book a hotel or apartment near Palais des Congrès while in Paris for a convention or congress to take advantage of one of the world's greatest cities.

The two other exhibition centers in the city are Paris Nord Villepinte and Porte de Versailles Exhibition Center. 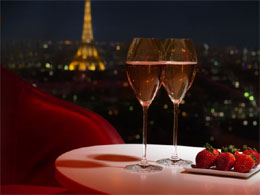 The bar of Hyatt Regency Etoile

The Boutiques du Palais have 80 shops and are a good place to shop if you stay in the district. The list of stores includes fashion stores Celestina, Finsbury, De Fursac, Gap, Hugo Boss, Lacoste, Marciano, Rodier, Sinequanone, Zadic & Voltaire as well as Sephora cosmetics store. You will easily find a gift for a friend or something for you. The place is quiet and includes cafes. Open from Monday to Saturday from 10.30 to 7.30pm and on Sunday from 11am to 7pm. Les Boutiques du Palais web site. 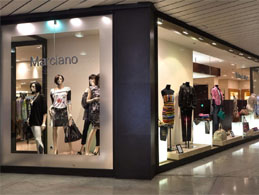 Le Méridien Etoile has 1025 rooms and is across the street from Paris Congress Center. It is 5 km from La Défense and a 20 minute walk from Champs-Elysées and the Arc de Triomphe. The Parc des Princes Stadium is 15 minutes away by car. The Jazz Club Etoile is located on the ground floor of the hotel. It is a well-known jazz club which hosts some of the world’s best musicians. The club overlooks the interior courtyard. Le Méridien Etoile information.

The Hyatt Regency towers above Paris Congress Center. Panoramic city views are offered from the free, fully-equipped fitness center on the 34th floor. The designer guest rooms include a desk, cable TV, air conditioning and a safe. Some rooms offer large windows with panoramic views of the Eiffel Tower. A selection of unique cocktails is served in the stylish Bar La Vue, offering more views of the Eiffel Tower. Hyatt Regency information. 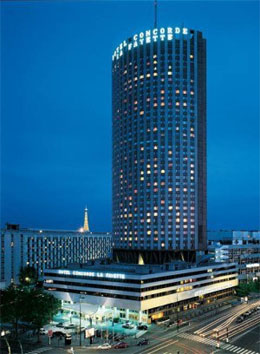 Apartments and hotels near Palais des Congrès on the map

The original Palais des Congrès was designed by French architect Guillaume Gillet, and inaugurated in 1974.

The spectacular 1997-1999 extension of Palais des Congrès was designed by Christian de Portzamparc, a French architect and Pritzker price winner. A white sloping facade and a large cone gave a new look to the building.

The Palais des Congrès now has 32 000 m2, a flexible 3723 seat auditorium, Le Grand Amphitheater, which can be used for concerts, shows and conventions, three smaller auditoriums and multiple conference rooms. Contiguous to the Palais des Congres, the 137 meter tall Hyatt Regency Etoile provides a spectacular view over the city, the Bois de Boulogne and La Defense. The bar La Vue, located on the 34th floor of the hotel, is open to all. 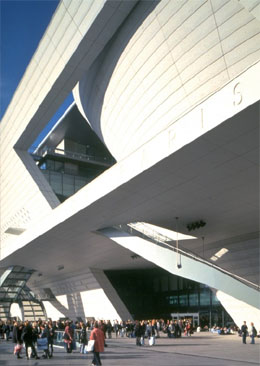