The Cité Internationale Universitaire de Paris is one of the hidden treasures of the city. It is located in a 34 hectares park south of Paris, 10 minutes by metro from the left Bank and Notre-Dame Cathedral. The Cité Universitaire offers up to 6,000 seats and welcomes approximately 12,000 students each year from over 130 different nationalities.

The Cité Internationale Universitaire de Paris is a private foundation that promotes, in a spirit of tolerance, exchanges between students from around the world. The students are housed in 37 pavilions built between 1925 and 1969 and managed independently from La Sorbonne and the University of Paris. Many of them are architectural treasures. The goal of the Cité is to achieve a mix of cultures. Its creation dates back to the post-World War I period when the great difficulty of accessing higher education, given the economic crisis, was coupled with a shortage in housing construction. To overcome these problems, in 1919, André Honnorat, the French Minister of Education, proposed to allocate 38 hectares of the demolished fortifications to the construction of student homes. He got the commitment to this project of the Rector of the Academy of Paris and the financial support of Emile Deutsch de la Meurthe, an oil mogul, who commissioned the first foundation of the Cité Universitaire. 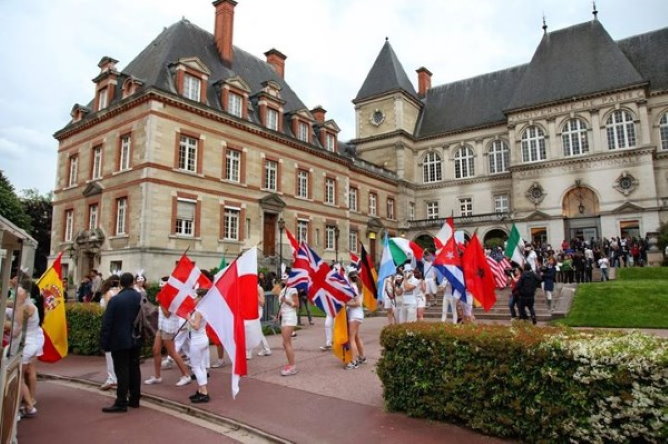 In 1922, architect Lucien Bechmann presented the project of the first foundation, composed of seven pavilions articulated around a central building. The spirit was quite close to Oxford’s English colleges with obvious links to the garden city models that Lucien Bechmann had previously built in the North of France. The program had to respect the specifications established for the whole of the cité: in particular the separation between the male and female students. Particular attention was paid to the development of collective services to promote exchanges between students. Care had also been taken in the design of furniture and interior fittings. Lucien Bechmann built 326 rooms and continued to act until 1953 as consulting architect of the Cité Universitaire. The building blocks are stone, red brick, roof slate, gable roofs, corner turrets, mullions and bow windows. The central building includes meeting places and collective living, it uses largely wood for the apparent frame, the paneling and the arrangement of the rooms of meetings. 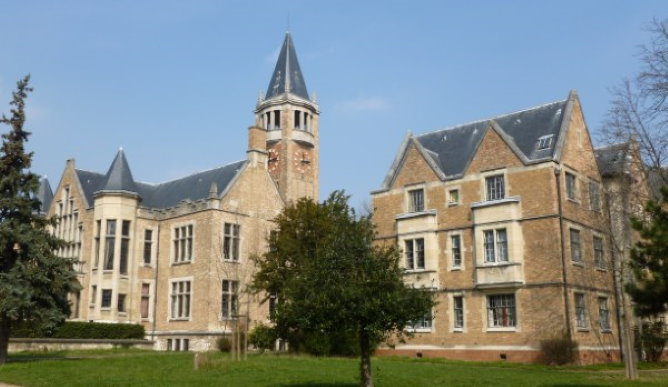 The Maison Internationale was built in the 1930s. It was the fourth of its name after New-York (1924), Berkeley (1930) and Chicago (1932). It was financed by a donation from the American philanthropist John D. Rockfeller Jr. After spending part of his fortune on the restoration of the castles of Fontainebleau and Versailles, he became interested in the Cité internationale. The idea was to build an area common to all houses to encourage meetings and brewing.

The design of the International House was entrusted in April 1933 to the American architect Jean-Frédéric Larson. The latter was inspired by classical French architecture, especially the castle of Fontainebleau. The International House was inaugurated in 1936. It forms a monumental complex of 22,000 m2 consisting of two symmetrical entrance pavilions, a main courtyard and a central building block flanked by two wings. 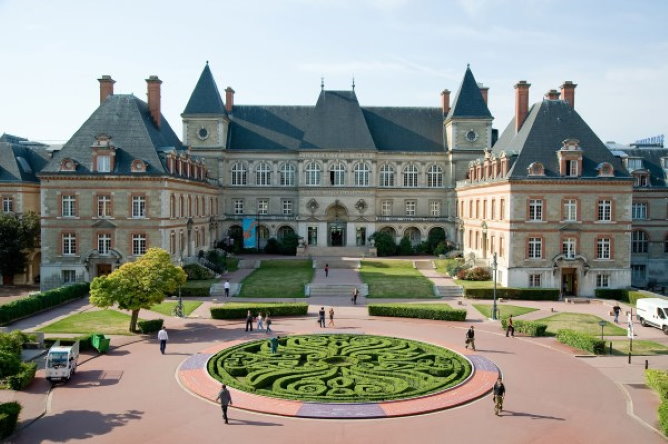 The Swiss Pavilion is the full and complete work of Le Corbusier in the Cité Internationale. It was in 1924 that the Swiss Federation took the decision to build a pavilion. After many internal debates about the representation of Switzerland by a chalet, the formal order without going through a competition intervened in 1930. Four projects of Le Corbusier followed each other from 1930 to 1931. The program of the order was succinct: 42 student rooms, a refectory for breakfasts, an entrance hall, 2 rooms for management and one for the concierge. The budget was very tight while the nature of the land required deep and expensive foundations. Despite a limited surface area (6 x 2.8m for each room) Charlotte Perriand’s furniture design and the south-facing arrangement with a floor-to-ceiling glass wall optimized the design. For this building Le Corbusier had implemented the famous "five points of the new architecture" formulated in 1927: piles, roof terrace, free plan, windows in length and free facade. This building had a resolutely contemporary image compared to other pavilions of the city that often oscillated between regionalism, folklore or tradition. Stilts had become obvious because of a floor crossed by galleries of old quarries, it was necessary to make 19.50 m deep foundations to find the right soil. Above the 1st floor, a steel structure on 4 levels is concealed by a build-up of bricks and slabs of reconstituted stone. There are three floors of accommodation plus the 4th floor reserved for the director’s apartment and the solarium accessible to residents. The pilings allow not to break up the green spaces of the plot but preserve a continuity and offer multiple visions. Room 105 remains accessible for visitors. 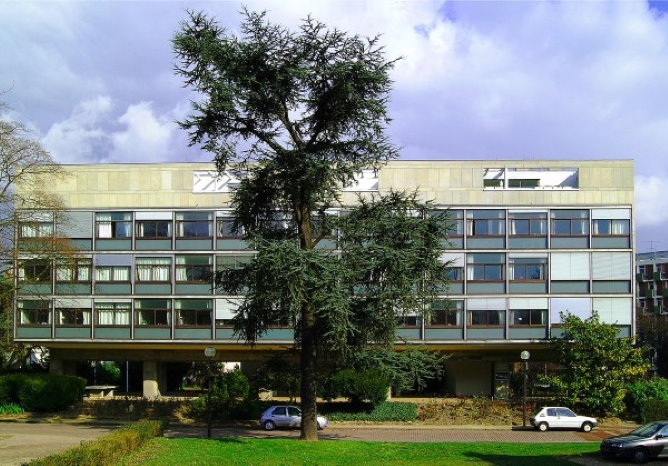 Lucio Costa, after studying in Switzerland and Great Britain, produced works in a neo-colonial style, with a traditionalist and nationalist tendency, which he rejected later. Its adherence to modern architecture was around 1930. In 1952, the Brazilian government led by Kubitchek commissioned Lucio Costa the project for the City. The latter presented a project that was a nod to the Swiss pavilion of Le Corbusier: the accommodation building is separate from the common living spaces and the facades take up the glass and the wall pierced with square windows of the corridors of the building Swiss. As soon as his preliminary draft was sent, Lucio Costa indicated that the execution of the works should be ensured by the workshop of Le Corbusier to guarantee the faithful interpretation of the project. Despite this precaution, the preliminary draft underwent a series of transformations and developments or details that left no doubt as to the strong footprint of the intervention of Le Corbusier. These important changes lead Lucio Costa to disengage from the authorship of the project. He wrote to Le Corbusier: "This is a house made for Paris, no doubt, but intended for the Brazilian government and for Brazilians and which, therefore, should not be conceived or realized in such a way as to translate a mind or an intention that can be considered as anti-Brazilian. We love clear and natural solutions, which are simple and harmonious, we are sensitive to grace; We do not like what is brutal, forbidding, complicated. The cutouts, the angular and aggressive shapes displease us." 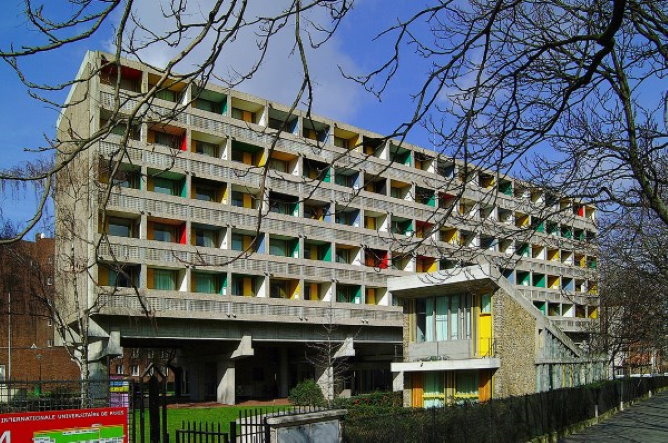 The committee created by the Dutch ambassador to Paris, in 1926 was the driving force behind the project to construct a Dutch house. The committee raised the necessary funds and construction began in 1928. Abraham Preyer, an American gentleman originally from the Netherlands, made a very generous donation in memory of his son Arthur who was killed in battle in France on 18 August 1918. Work was temporarily abandoned between 1933 and 1937 because of the difficult economic times. Construction was finally finished thanks to the financial contributions of both France and the Netherlands, and the building opened its doors on 2 December 1938 in a ceremony led by Princess Juliana and Prince Bernhard of the Netherlands. The Dutch College is considered one of the masterpieces of architecture in the Cité internationale. It is the only building in France designed by Willem Marinus Dudok, one of the leading architects from the Dutch school of the 1920s and 30s. Its persistent use of right angles, its overlapping geometric shapes and the spare use of decorative elements embody the modern architectural ideas of the 1920s. Yet some parts of the construction clearly harken back to more traditional Dutch culture. The corner turrets are inspired by the medieval belfries found in villages in the north of the Netherlands. Inside, the building is organised around an inner patio that serves as a light well. The welcoming atmosphere here contrasts with the more austere exterior. 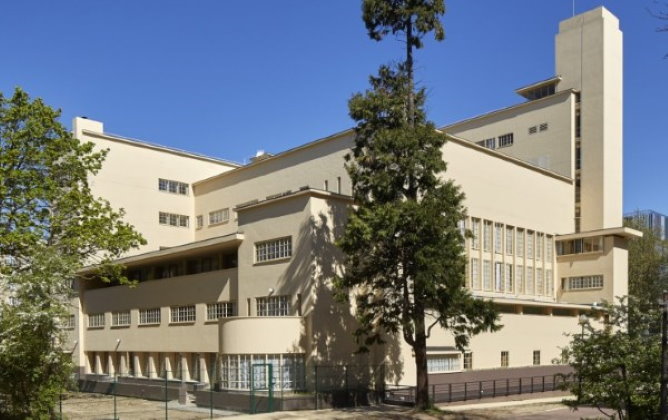 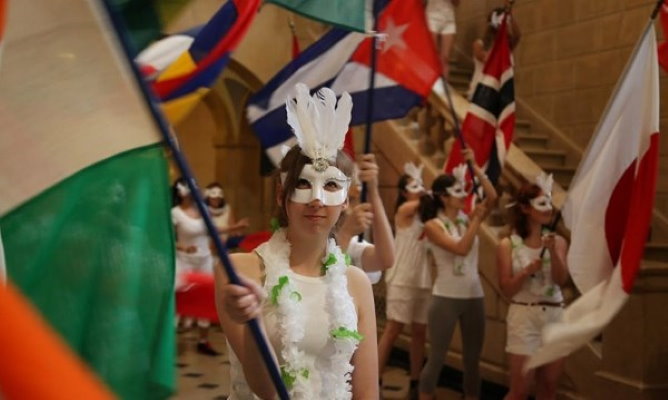