Bus tours to Normandy from Paris

On June 6, 1944, known as D-Day, the Allies opened a new European front against the troops of the Third Reich during the Second World War. It was the largest military operation in history, which marked the beginning of the Battle of Normandy and would lead to the end of the Second World War. This popular bus tour is an emotional one day bus tour from Paris to Normandy beaches to relive the important hours of D-Day landing and of the battle of Normandy. You will see Pointe du Hoc, the American Cemetery of Saint Laurent, Omaha Beach, Arromanches, the Caen Memorial. Normandy beaches map. 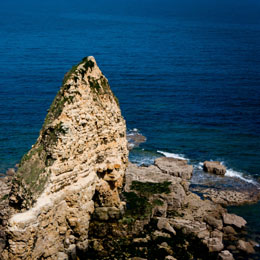 The most famous beaches in Normandy are D-Day Beaches. These beaches still attract many visitors, and are very attractive beaches in their own right, but a great deal of the coast of Normandy has noteworthy seaside resorts. Ahead of Cabourg, Houlgate and Trouville, Deauville oozes style. Glamorous events abound, from prestigious horse races and polo to the annual Deauville American Film Festival. Golf and thalassotherapy abound. Enjoy the elegant hotels, boutiques and restaurants, not forgetting Deauville’s greatest pull, its magnificent beach. Normandy beaches facts. 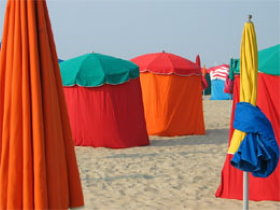 The village of Giverny is world famous for the house of impressionist painter Claude Monet and its marvellous garden. Claude Monet settled in Giverny, a lovely village in Normandy near Paris, in 1883 and untiringly transformed what was an abandoned domaine into a floral masterpiece, to be the inspiration for many of his greatest works of art. Locate Giverny on France map.

A delicious bus tour to the Normandy closest to Paris. Not available in winter. 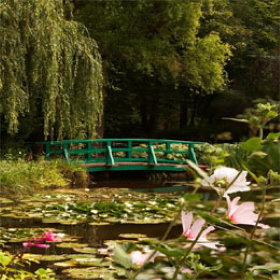 Claude Monet was born in Paris in 1840. A painter, Monet rejected the traditional approach to landscape painting and learned from nature itself. Monet observed variations of color and light caused by the daily or seasonal changes. Claude Monet settled in Giverny, a lovely village in Normandy near Paris in 1883 and untiringly transformed what was an abandoned domain into a floral masterpiece, to be the inspiration for many of his greatest works of art. Claude Monet traveled a lot, but he was never really far from his garden . Through constant correspondence, he kept a close eye on his family and garden. Frequent visits from his friends and admirers turned Giverny into the center of his existence. Until his death in 1926, the great painter would never really leave his Giverny house. Monet and Giverny.

Claude Monet attracted many American painters to Giverny. The interesting Giverny Museum of Impressionisms is a legacy of their stay in Giverny. More information on Giverny. 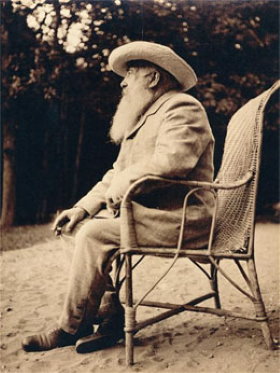 Discover Mont Saint-Michel, an island off the coast of Normandy, surrounded by a large bay with Europe's most extreme tides, topped by a spectacular 12th century abbey, a UNESCO World Heritage site. Locate Mont Saint-Michel on France map. A unique Normandy bus tour from Paris. 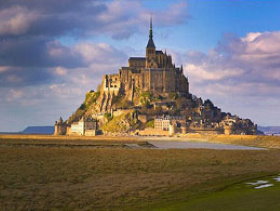 Mont Saint-Michel is a unique pilgrimage place in western Europe. It is dedicated to Michael the Archangel. The position of the sanctuary is also very special. Initially the whole Norman area was covered by woods and sometimes it was invaded by the sea. Three huge rocks of granite and other types of stone detached themselves from the landscape: mount Tombe, mount Tombelaine and mount Dol. The first would become Mont Saint-Michel.

In the Middle Ages, the pilgrimage to Mont Saint-Michel was seen as one of the most important journeys of faith underwent by the medieval man. Due to the difficulty of the road and the position of the sanctuary in the middle of the sea, it became a test of penitence and sacrifice for the medieval pilgrim. The pilgrims to Saint-Michel spread the word of God and the joy of having met the Archangel in the sanctuary beaten by the tides of the sea. Mont-Saint-Michel facts 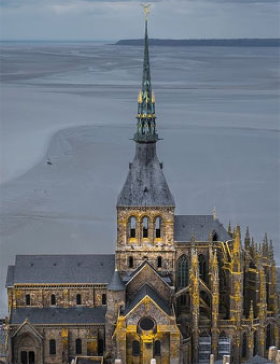 England and Normandy have had strong ties for a long time. William the Conqueror (1028-1087), Duke of Normandy, became the first Normand King of England. After a long struggle to establish his power in Normandy, he launched the Norman conquest of England in 1066. The full story.

When King of England Edward the Confessor died in 1066, leaving no heirs, three rivals disputed the throne : Harold, Harald III of Norway and William, the Duke of Normandy. William claimed that Edward had promised him the throne, and that Harold had pledged loyalty. William assembled a force of 600 ships and 7000 men and set forth with his army in his Viking ships to meet Harold, who had marched south to oppose William. The decisive battle of Hastings, in which Harold was defeated after a day-long struggle, established William and founded the lineage which dominated both sides of the Channel until the thirteenth century.

English troops greatly participated to the D-Day Landing in Normandy on June 6th 1944, which marked the beginning of the decisive battle to free Europe from Nazi domination. 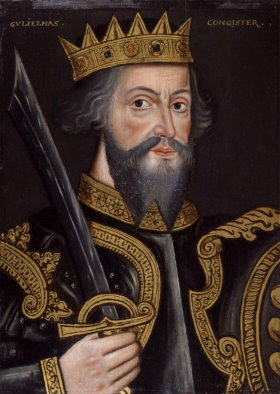 Normandy is one of the 13 regions of France, roughly corresponding to the historical Duchy of Normandy. Normandy is divided into five departments: Calvados, Eure, Manche, Orne, and Seine-Maritime. It covers 30,627 square kilometres (11,825 sq mi), making up 5% of the territory of France. Its population of 3.37 million accounts for around 5% of the population of France. Normans is the name given to the inhabitants of Normandy. The historical region of Normandy comprised today region of Normandy, as well as small areas of the departments of Mayenne and Sarthe. The Channel Islands are also historically part of Normandy. Guernsey and Jersey are British Crown dependencies over which Queen Elizabeth II reigns as Duke of Normandy. Normandy's name is derived from the settlement of the territory by Danish and Norwegian Vikings, the Northmen from the 9th century, and confirmed by the treaty of Saint-Clair sur Epte in 911 between King Charles III of France and Earl Rollo. For a century and a half following the Norman conquest of England in 1066, Normandy and England were linked by Norman and Frankish rulers. 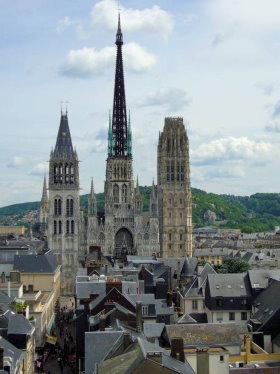