Book a Normandy tour from Paris. Normandy has beautiful seashores, towns and great food. D-Day beaches, Mont Saint-Michel, Giverny are famous. It takes two hours from Paris to Normandy, one day for a coach tour from Paris. Visit France.

This is an emotional tour from Paris to Normandy to relive the most important hours of D-Day landing and the battle of Normandy in June 1944. On June 6, 1944, known as D-Day, the Allies opened a new European front against the troops of the Third Reich during the Second World War. It was the largest military operation in history. More than 150,000 soldiers from America, Britain, Canada, France and other nations landed mostly by sea on beaches along the Normandy coastline, which they called Utah Beach, Omaha Beach, Juno Beach, and at the steep cliffs of Pointe du Hoc.

You will see Pointe du Hoc, the American Cemetery of Saint Laurent, Omaha Beach, Arromanches and the Caen Memorial (see D-Day map). The Caen Memorial Museum tells the story of the Second World War, in particular the Battle of Normandy and the advance of the Allied forces across France. You will have the chance to see everyday objects from life under occupation as well as films that recreate the emotions of the Battle of Normandy. 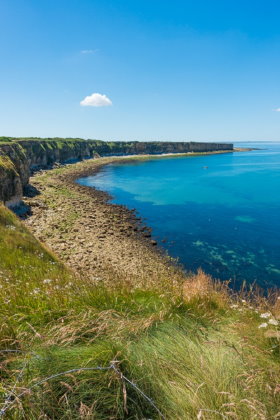 Giverny is world famous for the house of impressionist painter Claude Monet and its garden (locate Giverny on France map). Experience the world of this great artist, famous for his landscape paintings such as the Water Lilies, the Japanese Bridge and the Irises. Admire the water lily pond, with its play of light and colors, and Monet's Japanese bridge. Learn about the painter's daily life in his home and studio. The artist Claude Monet lived there for 43 years until his death in 1926. Inspired by color variations and gardening, he designed his flower garden, fruit trees and water garden as if they were one of his paintings. Visit Giverny's Impressionisms Museum, dedicated to the Impressionist movement in France and abroad, and enjoy the village and the charming gift and book shop, housed in what was once the Water Lilies studio. A delicious tour to the Normandy closest to Paris. Not available in winter. 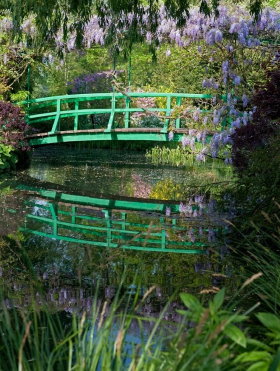 The Japanese bridge was designed by Claude Monet

It was at the request of the Archangel Michel that Aubert, Bishop of Avranches built a small church in 709. In 966, a community of Benedictines settled on the rock at the request of the Duke of Normandy. In the 11th century, the Romanesque abbey church was founded. In the 13th century, a donation by the King of France, Philip Augustus, enabled a start to be made on the Gothic section of the Merveille, two three-storey buildings, crowned by the cloister and the refectory. Mont Saint-Michel was, with Rome and Saint Jacques de Compostelle, one of the important pilgrimages of the western world. For one thousand years men, women and children went there hoping for eternity. 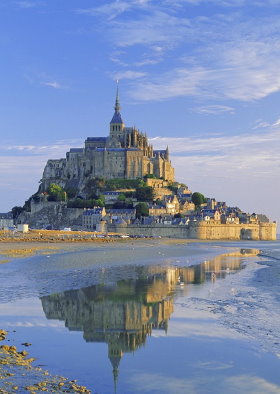