Musée Guimet is a little known museum 10 minutes from the Eiffel Tower. The museum has top asian art collections, specially khmer art from Cambodia, once ruled by France. One of the best kept secrets in town. Paris museums.

The little known Musée Guimet in Paris is one of the best Asian art museums in the world.

The collections are the results of one hundred years of passionate search since 1876 by industrialist Emile Guimet and many other lovers of Asian art. The Musée Guimet covers most of Asia from India to Japan, with outstanding Khmer art collections. The modern interior architecture of the museum was designed by Architect Henri Gaudin. 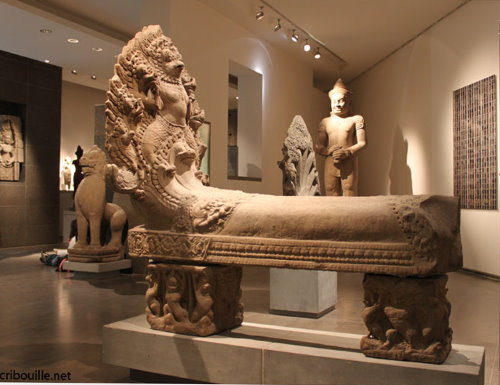 We recommend this remarkable out of the beaten track museum, close to Eiffel Tower and Palais de Chaillot. 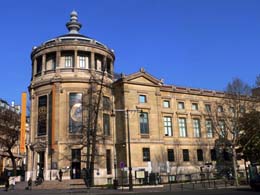 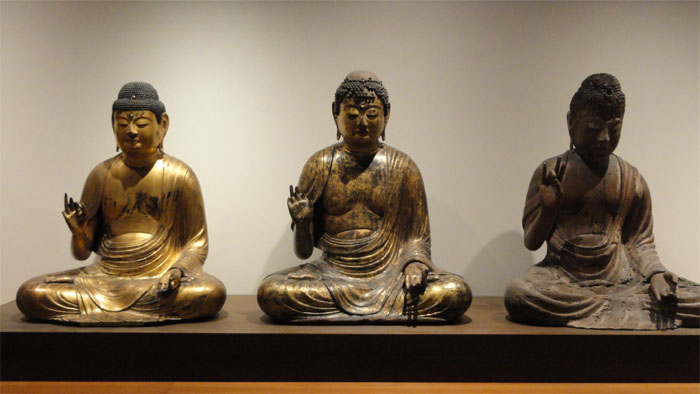 Apartments and hotels near Musée Guimet on the map

The National Museum of Asian Arts Guimet owes its name to its creator, Émile Guimet (1836-1918), a very cultured man, artist and musician in his spare time, representative of the philanthropic and paternalistic patrons of the 19th century. Influenced by Saint-Simon and by Christian social thought, he attached great importance to knowledge and transmission of knowledge to society and saw in the great religions of the world movements that have sought to make men happy. His approach as a museum creator therefore differed considerably from that of simple aesthete collectors collecting objects.

During his trip to Egypt in 1865, Émile Guimet was, during his visit to the Boulaq museum, struck in particular by its very didactic organization. He then continued to take an interest in religions and approached anthropological, archaeological and Orientalist circles. In 1873, he took part in the first international congress of orientalists organized in Paris, then discovered with wonder the museum of ethnography in Copenhagen where the presentation brought together the different religions of the world. From there was born the idea of ​​founding an institution bringing together a religious museum, a library and a school. To this end, in 1876 he obtained a mission from the Ministry of Public Instruction and Fine Arts to study the religions of Japan. During this trip, extended by a visit to China and India, he collected many Buddhist books and sculptures, including a replica of the carved mandala of the Tōji temple. Upon his return, he launched the project of his museum in his hometown of Lyon. The Universal Exhibition of 1878 offered him the opportunity to give a prefiguration of this through a presentation of the religions of the Far East.

In Lyon, he entrusted the architect Jules Chartron with the task of building a museum with his own funds, located opposite the Tête d'Or park. On a triangular plot, the architect imagined building in a neo-Greek style a set of galleries around a courtyard, articulated by an imposing circular tower serving as a vestibule and library. The initial project included, at the back, a mansion for Émile Guimet. In 1879, the first phase of work was completed when a third of the project was completed; on September 30, Jules Ferry came to inaugurate the museum. In rooms decorated in the Pompeian style, visitors then discover, in the rotunda, works from Roman antiquity and then, in the gallery on the ground floor, ceramics from China and Japan; the museum of religions proper is above with the religions of India, China and Japan on the first floor and the religions of Egypt, Greece and Rome on the second.

However, the Lyon project remained unfinished. Émile Guimet planned to transfer his museum to Paris where he thought it would be better appreciated. He then proposed to give all his collections to the State, provided that the latter built the new museum on the same model as that of Lyon and ensured its operation for at least forty years. Guimet would remain its sole administrator. The bill, hotly debated, was adopted in 1885. Work began on land ceded by the City of Paris between avenue d'Iéna and rue Boissière. The architect Charles Terrier then adapted the plans for the Lyon project and the museum was inaugurated on November 23, 1889. The interior decoration and organization of the collections also followed the Lyon model.