The Miraculous Medal Chapel attracts two million pilgrims each year to Paris. One of the most visited monuments in town owes its fame to Catherine Labouré who had apparitions of the Virgin there. Facts. History. Mass times. Paris monuments.

On November 28th 1830, the Holy Virgin entrusted Catherine with the medal. When Catherine died in 1876, two billion medals had already been made. 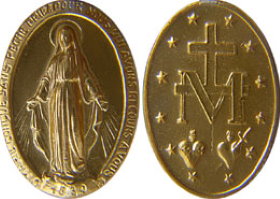 The medal of our Lady of Miraculous Medal

Our Lady of the Miraculous Medal

At the end of a small courtyard, behind the Bon Marché, is one of the most important places of prayer and Catholic pilgrimage in the capital, the Chapel of our Lady of the Miraculous Medal. Two million pilgrims visit the chapel every year, making it the second pilgrimage in France after Lourdes. Many fervent catholic services are held everyday. 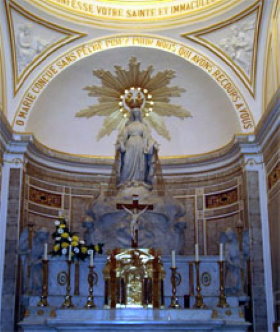 Our Lady of Miraculous Medal, Paris

The Daughters of Charity

The Miraculous Medal Chapel is in the Motherhouse of the Daughters of Charity, a sister order founded in 1633 by Saint Vincent de Paul and Sainte Louise de Marillac. The shrine of Louise de Marillac is located in the chapel. The shrine of Saint Vincent de Paul is located 95, rue de Sèvres (Paris map) at walking distance of the Chapel. More information on 95 rue de Sèvres. Today, the 20.000 Daughters of Charity serve poor people in 91 countries with humility, simplicity and charity. Web site. 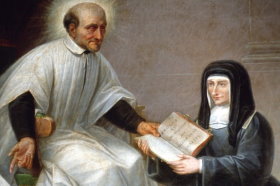 History of the chapel

The Chapel our Lady of the Miraculous Medal was built on the site of the former hotel of Chatillon. Consecrated on August 6, 1815, it was first dedicated to the Sacred Heart of Jesus.

First enlarged in 1849, it underwent several successive transformations until 1930, date of the centenary of the apparition, during which a total renovation gave it its present appearance. The last works date back to 2009, the chapel being closed to the public for several months. 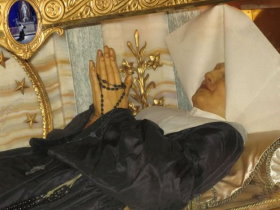 The Chapel of Our Lady of the Miraculous Medal is a very high place of pilgrimage, in the heart of Paris. Pilgrimages follow one another without interruption, every day, since the Virgin Mary appeared in 1830 to Saint Catherine Labouré, a simple novice of the Daughters of Charity- founded by Saint Louise de Marillac and Saint Vincent-de-Paul.

Sainte Catherine Labouré met three times with the Blessed Virgin. She also saw Christ present in the Eucharist, beyond the appearance of bread. The Virgin Mary said to her, "Come to the foot of this altar. There, graces will be poured out on all those who ask for them with confidence and fervor. The Blessed Virgin appeared to her, holding in her hands a golden globe surmounted by a Cross raised to Heaven; Catherine heard "This ball represents the whole world, France and each person in particular".

Another time, Catherine saw the Blessed Virgin and, from Her hands, radiated rays of extraordinary luminosity; the Blessed Virgin says: "These rays are the symbol of the graces that I spread over the people who ask them". Catherine then saw forming around the Virgin Mary and inscribed in a circle this prayer: "O Mary conceived without sin, pray for us who have recourse to you". It was then that a voice was heard: "Hit a medal on this model. Those who wear it with confidence will receive great graces ”

Finally Catherine saw the other side of the medal: above a cross surmounting the initial of Mary, below two hearts, one crowned with thorns, the other pierced with a sword.

The pilgrimages to the Chapel of Our Lady of the Miraculous Medal deserve to include a prayer to Saint Catherine Labouré and Saint Vincent-de-Paul- co-founder of the Daughters of Charity- whose intact body rests in the chapel of the Lazarists nearby, at 95 rue de Sèvres.