Van Gogh in Auvers-sur-Oise near Paris

Van Gogh spent the last sixty days of his short life in Auvers-sur-Oise near Paris. He painted there eighty masterpieces, including Wheatfield with Crows and the Church of Auvers, and commited suicide. His memory is kept in Auberge Ravoux where he stayed. The bus tour from Paris to Auvers-sur-Oise is a top tour for art lovers. Famous places in France.

The Auberge Ravoux, located in the heart of the village of Auvers-sur-Oise, 30 kilometers from Paris, was the last home of Vincent van Gogh. This site, classified as a historical monument, is today the only house where Van Gogh lived, preserved in its original state. The painter’s soul still vibrates under the eaves of Auberge Ravoux, and in Room 5, the glory of Van Gogh gives way to an atmosphere of intimacy.

The Van Gogh House is also a place of life: today as in 1890, the dining room welcomes guests from all over the world in the warm and authentic atmosphere of the cafes of artists of the past. Vincent van Gogh only spent 70 days in Auvers-sur-Oise. This short stay was, however, extraordinarily prolific, since this picturesque site, its inhabitants and its surroundings inspired more than 70 paintings. 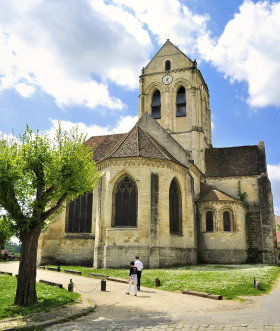 The church of Auvers-sur-Oise

Wheatfield with Crows is one of Van Gogh's most famous paintings. The menacing sky, the crows and the dead-end path are said to refer to the end of his life approaching. Van Gogh did want his wheatfields under stormy skies to express 'sadness, extreme loneliness', but at the same time he wanted to show what he considered 'healthy and fortifying about the countryside'. Van Gogh used powerful colour combinations in this painting: the blue sky contrasts with the yellow-orange wheat, while the red of the path is intensified by the green bands of grass.

The Church in Auvers is the only painting representing in full the church in Auvers. This church, built in the 13th century in the early Gothic style, flanked by two Romanesque chapels, became under the painter's brush a flamboyant monument on the verge of dislocating itself from the ground and from the two paths that seem to be clasping it like torrents of lava. 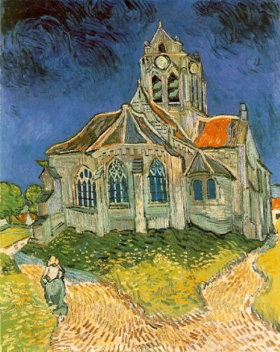 It takes a little more than an hour to get by train from Gare du Nord in Paris to the village of Auvers-sur-Oise. Most travellers come for Auberge Ravoux. Vincent Van Gogh, the famous Dutch painter, spent there his last two months and died from suicide on July 29 1890 in a miserable room, which reflected his extreme personal poverty and distress. On 27 July, the painter had shot himself in a nearby wheatfield, but wasn’t killed outright. He staggered up the steps, stumbled back to his room, the bullet lodged below his heart, and stoically waited for death. 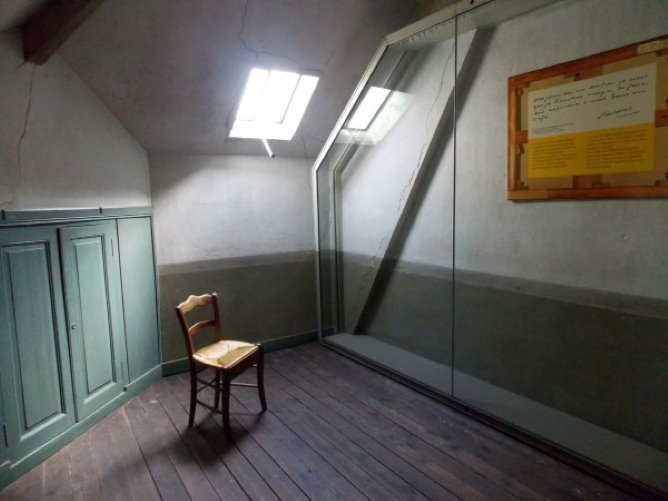 The visitors also come to see the superb romanesque church which Van Gogh so expressively painted then. The painting, one of heighty masterpieces which Van Gogh produced in two months, is now one of the treasures of Musée d’Orsay, the great impressionist museum in Paris. These eighty masterpieces alone are today worth a fortune. The Auberge Ravoux can be visited. There is a small shop on the first floor and Van Gogh’s room on the second floor. There is also a nice auberge on the ground floor, very similar to what it was at the time. Start with absinthe, which Van Gogh abused of, continue with escargots, seven hour lamb and spiced red wine poached pears, classical French dishes perfectly cooked. An excellent French meal with great French wines in the dining rooom Van Gogh visited. 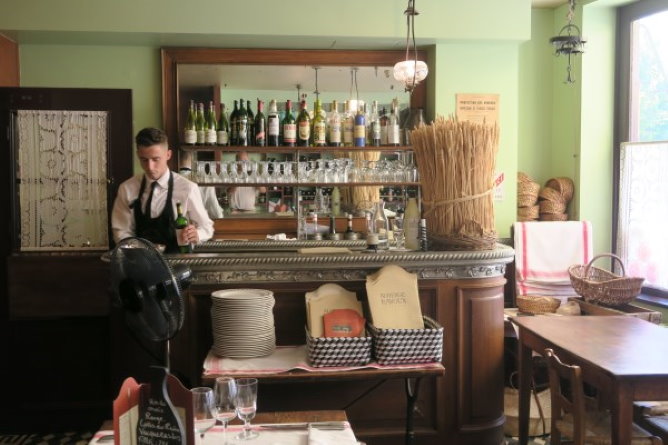 The dining room of Auberge Ravoux

You could meet Dominique-Charles Janssens, eating alone in a corner of the dining room. His relationship with Van Gogh is fascinating. In 1985, the Belgian entrepreneur was victim of a car accident. He discovered during his rehabilitation that it happened in front of the last place of residence of Van Gogh, who lived in 37 different places. After a sabbatical year, he started to visit 200 artists’ houses and came to the conclusion that this place of memory should revive. He then injected funds, carried out major restoration work, and opened to the public in 1993 with a restaurant and a museum. 20 million euros have been invested since the beginning of the project. He launched an association, the Institut Van Gogh to manage the cultural development. 4800 people hold the key to the House of Friends, sold from 500 to 5000 dollars, the keys finance the place, give access to a room rich in objects related to Van Gogh and act as a tax exemption tool. Dominique-Charles Janssens is close to realizing the dream of Van Gogh, be exposed in a cafe, by installing, within the already fully equipped room a painting painted by the Impressionist in Auvers-sur-Oise, that could be worth 100 million euros. Help him achieve his dreams by visiting Institut Van Gogh web site.

On July 28th 2020, the place where Vincent van Gogh painted his last famous painting Boomwortels (1890), just before he committed suicide, was unveiled. This happened in the presence of Emilie Gordenker, general director of the Van Gogh Museum Amsterdam, and Willem van Gogh, great-grandson of Vincent's brother Theo. The discovery of the exact location Rue Daubigny where Vincent van Gogh painted Boomwortels (Tree Roots) was made by Wouter van der Veen of the Institut Van Gogh in Auvers-sur-Oise. Van der Veen found a postcard from 1900-1910 showing, among other things, a hillside overgrown with tree trunks and roots. The painting is part of the collection of the Van Gogh Museum Amsterdam. 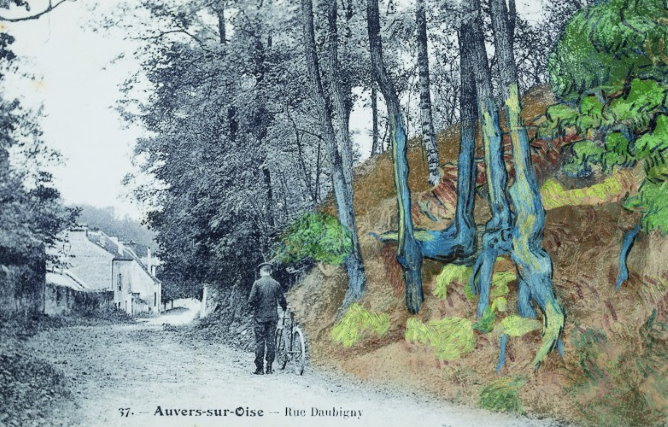 Now known worldwide, Vincent Van Gogh (1853-1890) remains in the History of Art the very example of the "accursed painter", doomed in his time to misfortune, indifference and loneliness (he remains the only painter whose genius was recognized after his death and not during his lifetime).

Son of a Dutch pastor, he was born in 1853 in the Netherlands. Faithful to the family tradition, he was an art dealer for a time, in London then in Paris. After having thought of joining the priesthood, he failed his theological studies and became a missionary to the miners of Borinage. Thanks to the financial support of his brother Theo, with whom he was very close and with whom he maintained an intense correspondence, in the 1880s he embarked on a late career as a painter, starting by taking as models the poor peasants of his country and by inspired by the realistic painter Jean-François Millet. By his use of black, in particular to emphasize the outlines, he ranks among the post-impressionists like his friend Émile Bernard, creator of the Pont-Aven school. He contributed to the pictorial vogue of "Japonism".

In 1886, fragile in physical and mental health, exhausted by money problems, he joined his brother Théo in Paris, an art dealer, and discovered Impressionist painting from which he borrowed the themes and colors and where. He met Toulouse-Lautrec, Pissarro, Gauguin, Signac.

Attracted by the light of the South, he left for Arles where his genius was exacerbated as much as his madness. He immersed himself in the work to endlessly create canvases where he gave free rein to the colors that seem to explode to better fill the space. In order to alleviate a feeling of exile which weighs on him, he brought to him Paul Gauguin, artist to whom he dedicated a great admiration. But the cohabitation went badly and, in a fit of madness, Van Gogh tried to assault his guest before turning a razor against himself and cutting his earlobe. His psychotic crises brought him to the nursing home of Saint-Rémy-de-Provence before his devoted brother found him a refuge in Auvers-sur-Oise, with Doctor Paul Gachet, friend of painters and amateur painter himself.

The arrival of the railway in 1846 in the small town of Auvers-sur-Oise (2000 inhabitants) had brought there painters attracted by the bucolic charm of the valley, starting with Charles-François d'Aubigny (1817- 1878), the first artist to paint outdoors. He received in his workshop Corot or Daumier. Vincent belonged to the next generation. He arrived in Auvers on May 21, 1890 and boarded at the Auberge Ravoux. For 70 days, he painted some 78 canvases with frenzy. But the despair became too strong and it was finally in the middle of a field that, on July 27, 1890, he shot himself with a revolver in the stomach. He died two days later after long hours of agony, having sold only one painting during his lifetime. His brother, desperate and sick with syphilis, followed him to the grave a few months later. They are buried together in the cemetery of Auvers-sur-Oise

Van Gogh, who only sold one canvas, is the only one of all the great painters not to have been recognized during his lifetime. He deserves the qualifier of "accursed artist". However, he was able to live in honorable ease thanks to the monthly allowance of 150 francs his brother gave him. He and Théo had the project of making their collection grow, but death did not give them time. Vincent's works (879 identified) are now reaching records in auction rooms and his genius is fully recognized. 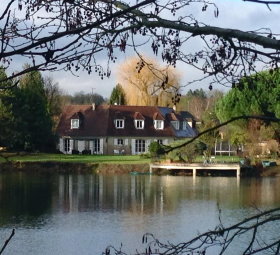