The Paris Flea Market in Saint-Ouen is one of the most picturesque districts and interesting shopping venues of the city. Take pictures, buy souvenirs, have lunch, find something unique. You can easily spend there half a day. Shopping in Paris. 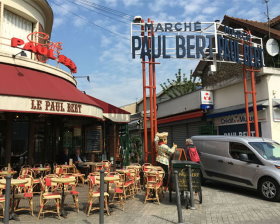 In the 1950ies and 1960ies, you could buy great antiques at bargain prices in the Paris Flea Market.

This is rarely the case anymore, but the Flea Market remains a fascinating shopping venue to visit.

Choice is plenty, allowing you to buy something unique. Prices are moderate to high. The picturesque Flea Market is a true Parisian shopping experience. 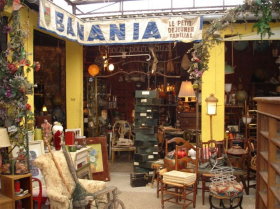 Antiques can be found in the Flea Market

The Flea Market is composed of 14 separate markets (Marchés) with their own atmosphere, all within walking distance. Use the map below to visit them all.

Locate the Flea Market on the map.

The Paris Flea Market is open from 10am to 7pm on Saturdays, Sundays and Mondays (fewer shops open). 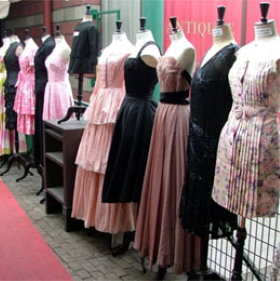 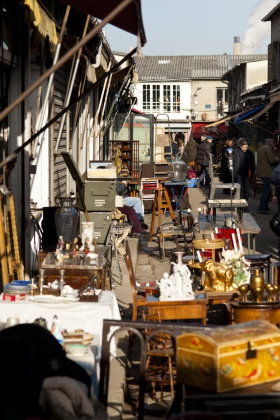 After the Franco-Prussian war of 1870, the rag-and-bone men who had been ousted from Paris built the first merchant villages in Saint-Ouen. These wandering scavengers were nicknamed “bone pickers”, “rag grabbers” and “street grubbers”, and also, more poetically, “moonlight sinners” as they would roam through towns at night looking for discarded items or rubbish that they went on to sell at the markets.

The year 1885 saw the official opening of the Paris flea market. The town of Saint-Ouen rallied together to cleanse and secure the area. The merchants wishing to sell their wares there had to pay for the right to do business there. Newspapers published complimentary reports about the market between 1905 and 1914. More and more Parisians would come here on Sundays, in keeping with their tradition of going for a walk outside the city walls.

After WWI, the Flea Market became so popular that businessmen bought up the land surrounding the rue des Rosiers. They built streets and connected certain stalls with the water and electricity networks and sold these spots at a very high price. This is how the first four markets were established between 1920 and 1938. They were the Marché Vernaison, the Marché Malik, the Marché Biron and the Marché Jules Vallès.

From that time on, the flea market became a very fashionable place, famous for its cafés, bistros, restaurants and entertaining activities. At the time, the many bistros in the area were very popular with the new working population of Saint-Ouen. This community started to mix with that of the gypsies who were also living here in caravans. The gypsies brought life to the town with their music, the Gypsy Jazz. The famous Django Reinhardt was known to have played at Les Puces, as well as in many open-air cafés from here to Montmartre.

The city has a second Flea Market at Porte de Vanves in the left bank of the Seine River. Located in a no tourist area, this Flea Market is smaller and totally outdoor. 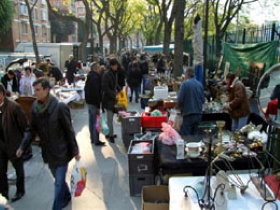