Dollar to Euro. What is a dollar in Paris?

The euro is the official currency of the eurozone, which consists of 19 of the 28 member states of the European Union: Austria, Belgium, Cyprus, Estonia, Finland, France, Germany, Greece, Ireland, Italy, Latvia, Lithuania, Luxembourg, Malta, the Netherlands, Portugal, Slovakia, Slovenia, Spain. The euro is used by the institutions of the European Union and four other European countries and is consequently used daily by some 337 million Europeans.

The European Central Bank (ECB) is the central bank of the 19 European Union countries which have adopted the euro. Its main task is to maintain price stability in the euro area. 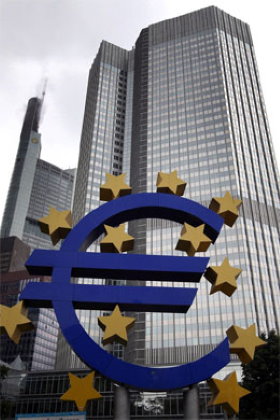 The European Central Bank in Frankfurt

Euros and dollars in Paris

Your best source of cash is an automated teller machine (ATM) or cashpoint. You'll find ATMs on banks and post offices all over Paris, and most of them have step-by-step instructions in your choice of French, English, and other languages. Be prepared to use a four-digit numberic PIN. You'll nearly always pay a small transaction fee on cash withdrawals outside your bank's ATM network.

ATMs nearly always have better rates than currency-exchange offices and hotel reception desks. If you insist on exchanging cash or traveler's checks, try to limit the amount, because changing money back into your own currency at the end of your will mean yet another exchange commission.

Visa and MasterCard are accepted by most shops and restaurants, though smaller merchants, some neighborhood restaurants or bars, and street vendors may not take credit cards. (Also, restaurant tips are normally given in cash.) American Express is accepted at higher-end boutiques and restaurants that cater to tourists. 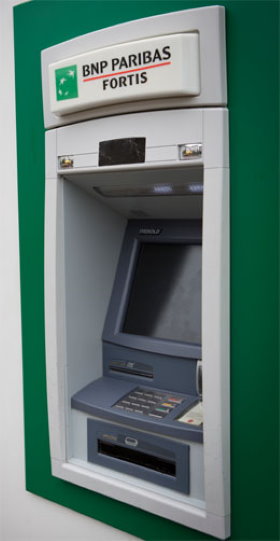 24/24 ATMs are widely available in Paris

The European Union was first created as the commun market. It involved no commun currency. France retained the French Franc as Germany retained the Deutsch Mark. An economic and monetary union (EMU) was a recurring ambition for the European Union from the late 1960s onwards. It involves coordinating economic and fiscal policies, a common monetary policy, and a common currency, the euro. The international currency stability that reigned in the immediate post-war period did not last. Turmoil in international currency markets threatened the common price system of the common agricultural policy, a main pillar of what was then the European Economic Community. Later attempts to achieve stable exchange rates were hit by oil crises and other shocks until, in 1979, the European Monetary System (EMS) was launched. The EMS was built on a system of exchange rates used to keep participating currencies within a narrow band. This completely new approach represented an unprecedented coordination of monetary policies between EU countries, and operated successfully for over a decade. However, it was under the presidency of Jacques Delors when central bank governors of the EU countries produced the 'Delors Report' on how EMU could be achieved. The Delors Report proposed a three-stage preparatory period for economic and monetary union and the euro area, spanning the period 1990 to 1999. European leaders accepted the recommendations in the Delors Report. The new Treaty on European Union, which contained the provisions needed to implement the monetary union, was agreed at the European Council held at Maastricht, the Netherlands, in December 1991. After a decade of preparations, the euro was launched on 1 January 1999: for the first three years it was an ‘invisible’ currency, only used for accounting purposes and electronic payments. Coins and banknoteswere launched on 1 January 2002, and in 12 EU countries the biggest cash changeover in history took place.