So far, the 13 arrondissement was one of the very few Paris arrondissements that had almost no sight of interest. Parisians and travelers came for Asian restaurants in Chinatown on Avenue de Choisy and Avenue d’Ivry. That was it. Now look around as you ride the aerial metro line 6 between Place d’Italie and Nationale stations. Almost opposite to each other and both visible from the metro are two spectacular Street Art frescoes by D*Face. D*Face,born in 1978, whose real name is Dean Stockton, lives and works in London. His style is recognizable by the use of pop art imagery, reminiscent of Roy Lichtenstein or even Andy Warhol. His works deal in a dark and satirical way with the obsession of society for celebrities and overconsumption. His frescoes represent expressive feminine or masculine figures, often accompanied by a commentary or a thought. In 2017, D*Face realized his first fresco in Paris as part of the project Street Art 13, at 10 place Pinel 75013. For his frescoes, the artist is always inspired by the city and the surrounding environment. Paris being known to be the city of love, it was obvious to him to paint on his wall a couple in love and romance. "Love will not tear us apart" represents a disfigured man and a woman who embrace. These are the positive effects of love. The disfigured man represents the people we loved who are no longer in our lives, but who continue to live through our memory. The subject is not the loss of a loved one but his memory. 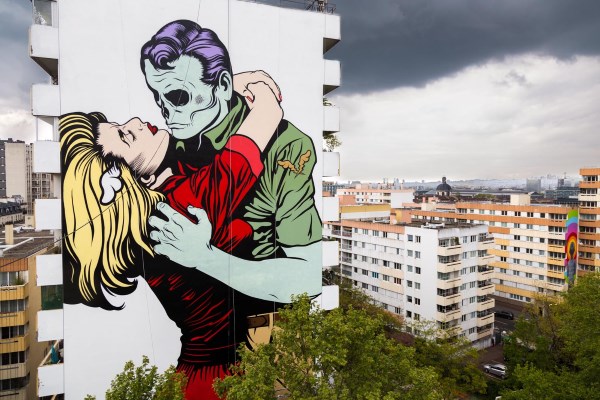 In 2018, the artist painted a second monumental fresco, named Turncoat, at 155 boulevard Vincent Auriol. It is the reproduction on wall of the painting Turncoat, there 25 meters high and 15 meters wide. The fresco represents a woman in close-up. This three-quarter portrait focuses on her expression. Her gaze defies us. She is dominant, almost angry. The portrait is made from a color scheme around the blue color. This palette is the mark of melancholy. The lips of the woman, an electric red, mark her vitality and her power of seduction. This mouth contrasts with the rest of the image. It echoes the eroticism and violence of human relationships. Her frowning brows and rebellious hair inject movement into this image. What differs with the couple of Place Pinel is the woman loneliness. 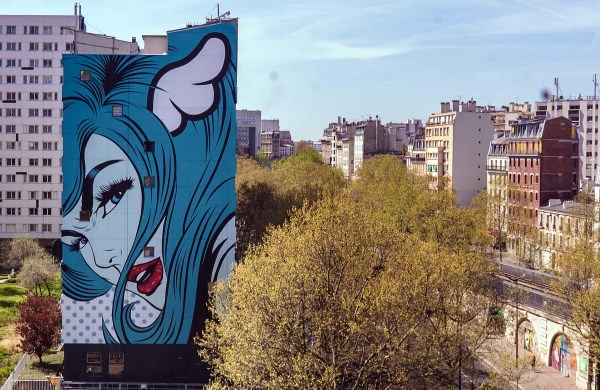 These frescoes are part of a spectacular series of street art frescoes that illuminate the dull social housing high-rises that abound in the 13 arrondissement. An initiative of the City of Paris and Galerie Itinerrance, these Street Art frescoes are a new out of the beaten track open-air Paris museum. Download Street Art 13 itinerary and here you go. 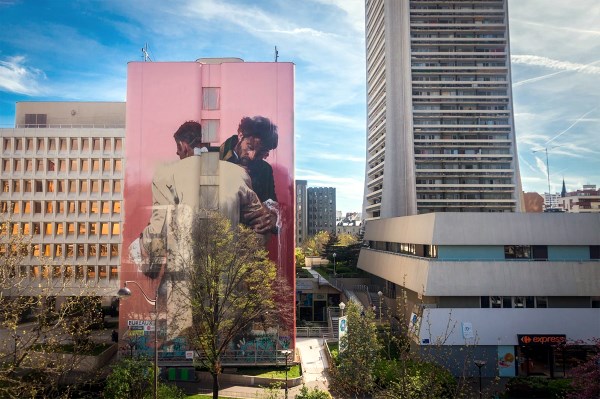