The Seine is very high as the result of heavy rains for two months. No match to 2018 and 1910 though. As a result of intense rains in December and January 2018, the lower quays were flooded and the Seine level reached 6.20 meters end of January. This was far from the 8.62 meters record during the centennial flood in 1910, 118 years ago. 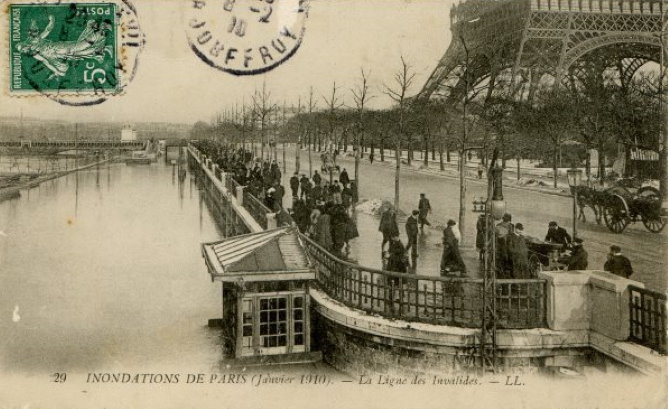 The 1910 flood remained in memories as the most damagable. It was the result of several simultaneous meteorological elements, which were combined with the geographical location of Paris and the reaction of the soils. The summer was particularly summer. The winter was marked by heavy rainfall as significant snowfall and torrential rains hit the whole of Europe from the autumn of 1910. The land was saturated with water, causing a strong rise of the Seine upstream of Paris as the tributaries of the Seine, like the Marne and Yonne, were also in flood. In the capital, water took the recently opened underground and surface waterways for transport and sewerage. It overflowed the Seine, the quays and streets, up to the Saint-Lazare train station on the right bank. Contrary to the recommendations of Engineer Eugène Belgrand, two railroad tracks had been built along the Seine, easy roads to accelerate the flood. It affected twelve arondissements and several hundred streets. Some prestigious sights located near the Seine, such as the Petit Palais and the Louvre, were affected by the rising waters. 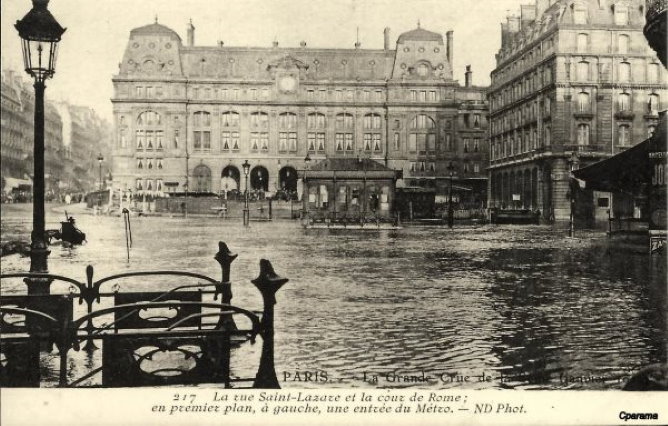 In January 1910, six metro lines were already in operation, including one under the Seine, and four lines were under construction. Paris had ten train stations, four were affected by the flood: Gare d’Orsay, Gare de Lyon, Gare des Invalides and Gare Saint-Lazare. The energy then used in the capital came from three sources: gas, for street lamps and the majority of homes, compressed air, for public clocks, elevators and certain industries, electricity, mainly for the metro and part of the public lighting. During the flood, the factories, the stations and the cables supplying the electricity were drowned, and the current was cut even in non flooded arondissements. The metro, like the sewer pipes, participated in the propagation of water. These two technological advances turned against the city, a victim of its modernity. At the beginning of the 20th century, Paris was indeed one of the world’s best equipped cities with public transport. As the modern energy sources were inoperative, the old horse-drawn omnibuses were put back into service and the 75,000 horses still present in the capital proved very useful. Gathered in the hall of Gare de Lyon transformed into a stable, the horses died in large numbers. 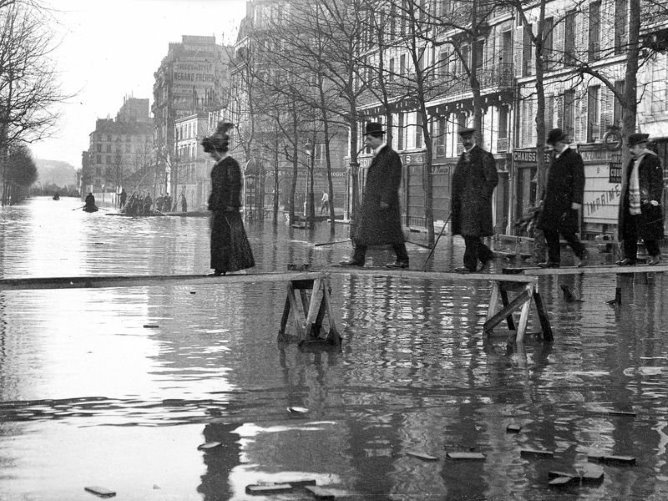 The rise of the waters also interrupted the commercial traffic of the first fluvial harbour of France, immobilizing the barges in Paris and in the suburbs. The Seine was indeed at the time a vital route for the supply of the capital. The warehouses of Bercy were totally flooded as of January 22; a lake 5 meters deep was formed, and the barrels drift in a strong smell of alcohol. However, the Halles were not reached by the waters and Paris knew more difficulties of routing than real food shortage, even if the goods stored in the 22 000 flooded cellars were often damaged.
On January 26, the Préfet de la Seine, the aministrative authority, convened an extraordinary session of the city council to organize relief. It was a matter of dealing with this catastrophe with which the services seemed badly powerless. Emergency measures were taken concerning assistance to people and stopping the spread of water. It was decided to call on the Ministry of Navy and the Army Engineers to carry out relief operations, previously carried out by the municipal services, the police and the fire brigade. The sailors requisitioned by the Préfet de la Seine arrived in Paris with 300 canoes, foldable boats with flat bottom. The task was enormous: 20,000 buildings flooded, out of 80,000 in the capital, 150,000 people affected. Even more than Paris, the suburbs were hardly hit. 200,000 people seek refuge in the capital, where the capacity was more important. Exhaustion pumps were put into action. The water was pumped and evacuated in several strategic places of the city, the first goal being to evacuate underground and railroad tracks. These rapid mechanical pumping sometimes resulted in scouring, an erosion due to a fast current, with the risk of house collapse. The soldiers were requisitioned to build bridges and footbridges for the circulation of the people and the evacuation of the patients, to install dikes against the overflows, to fill gaps and to pump the water. The sailors of Brest, with canoes, provided another part of the relief, from the transport of the wounded to the transport of the people. This action improved the perception of the Bretons, immigrants still badly seen in the capital. 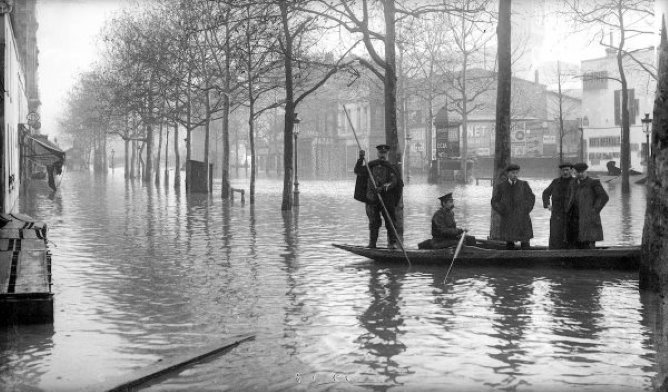 After the flood As of January 29, the Seine stopped climbing. Two secondary floods occured in February and March and it was necessary to wait until March 15 before the Seine finally returned to bed. Finally, the water was efficiently pumped from the cellars. They were rid of detritus and foul-smelling muds, and disinfected as quickly as possible to avoid the risk of epidemics. Disinfection of premises and flooded streets was the responsibility of city departments. The official municipal suppliers then proposed their disinfectants. The cleaning of the capital took two months, eliminating any risk of health catastrophe. Seine river in Paris.