To celebrate its 30th anniversary, Parc Asterix, the amusement park north of Paris, inaugurated on April 27 its 42nd attraction called "Attention Menhir!". It is the first 4D cinema in the park. With a total duration of 20 minutes, "Attention Menhir!" consists of two parts. Before entering the cinema room, a pre-show puts you in the mood of the film. Through chinese shadows, you find yourselves in the Roman camp of Babaorum. Centurions go about their business before Caesar stops them for a mission of the highest importance: capture Panoramix to deprive the Gauls of their magic potion. You then go to the second room. Installed in dynamic seats with 3D glasses, you live the sensations of our heroes through a cartoon created specifically for the park with all the best of Asterix. An unpublished story that takes place in a day. Panoramix walks into the forest to get his ingredients for the preparation of the magic potion. But he is crushed by a menhir and loses his memory. The Romans take the opportunity to attack the Gallic village.

And here you go for 10 minutes of sensations. Beyond the animated adventure on the screen, many special effects assail the spectators installed in their dynamic seat. Wind, drops of water, shakes, tremors and even smells accompany the images on the screen. You escort Idéfix in his race into the forest, you feel the shocks of the menhirs falling on the ground. There are lasers for magic potion effects and smoke effects in the room. The special effects were designed together with the film. This attraction is the result of international collaboration. Indeed French directors live in Canada, the dynamic seats were made in Brittany, the sets are Italian, the special effects and the light come from Belgium. A beautiful collaboration that has not finished being successful. Paris for chirldren 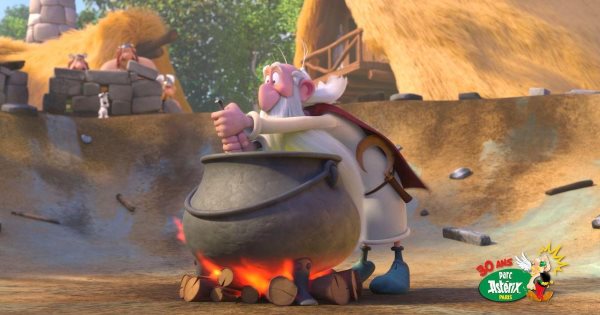