Lorenzo Lotto in the Louvre


The 1535 painting by Lorenzo Lotto « A woman caught in adultery », is one of the many treasures of the Louvre Museum. It illustrates the moving gospel of the day by John and can be admired in the Italian paintings department. 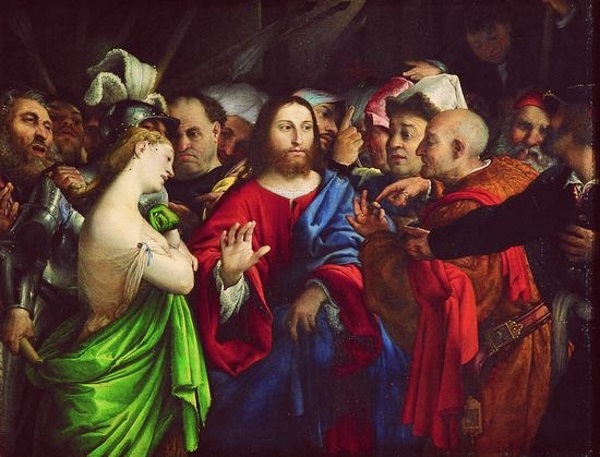 « and Jesus went to the Mount of Olives. At daybreak he appeared in the Temple again; and as all the people came to him, he sat down and began to teach them. The scribes and Pharisees brought a woman along who had been caught committing adultery; and making her stand there in the middle, they said to Jesus, ’Master, this woman was caught in the very act of committing adultery, and in the Law, Moses has ordered us to stone women of this kind. What have you got to say?’ They asked him this as a test, looking for an accusation to use against him. But Jesus bent down and started writing on the ground with his finger. As they persisted with their question, he straightened up and said, ’Let the one among you who is guiltless be the first to throw a stone at her.’ Then he bent down and continued writing on the ground. When they heard this they went away one by one, beginning with the eldest, until the last one had gone and Jesus was left alone with the woman, who remained in the middle. Jesus again straightened up and said, ’Woman, where are they? Has no one condemned you?’ ’No one, sir,’ she replied. ’Neither do I condemn you,’ said Jesus. ’Go away, and from this moment sin no more.’ »