Except for a few trips, Claude Monet, one of the greatest representatives of Impressionism, has never really left the Seine River Valley, since his childhood in Le Havre, the sea harbor, his youth in Paris, then frequent stays in Bougival and Argenteuil, until his final and permanent installation in Giverny, downstream from Paris in Normandy. The open-air painter Eugène Boudin, noticed Claude Monet’s caricaturist talents in 1858 and encouraged him to work in the open. It was a decisive step for the young painter. The following year, Monet left Le Havre to go to Paris. 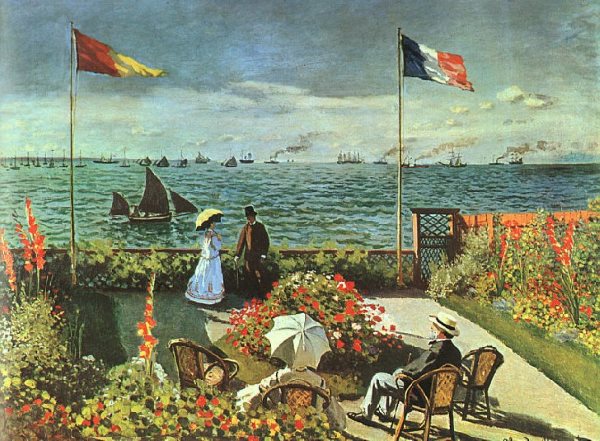 In Paris, Monet attended the Swiss Academy, where he met Camille Pissarro. After two years of military service in Algeria, Claude Monet was back in Paris. In 1862, he entered the studio of painter Charles Gleyre. Monet in his turn persuaded his fellow students Frédéric Bazille, Auguste Renoir and Alfred Sisley to paint outside and follow him to the forest of Fontainebleau. In May 1864, Frédéric Bazille joined him to work on the Normandy coast, along with Boudin and Dutchman Jongkind. Monet painted many times on the Normandy coast. 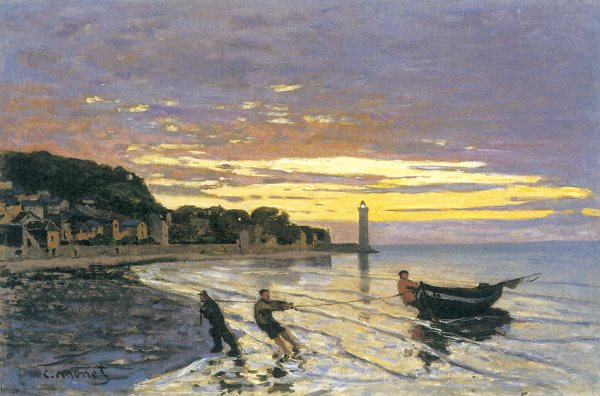 For Claude Monet, painting was an obsession, to which the artist must sacrifice everything. He was early on influenced by Corot, Boudin, Jongkind and Manet. With Femmes au jardin (1867), Monet broke with the "classical" representation of landscape, traditionally attached to the transposition of a state of mind. This painting conveys, without the mediation of romantic intentions, a fleeting moment of the brilliance of nature in spring. This work, which still belongs to the technique of Manet, was refused at the Salon of 1867, and bought by Bazille to help Monet (in June 1868, Monet, in misery, tried to commit suicide). We can also see in this painting the "impressionist" research of a directly seizable atmosphere. 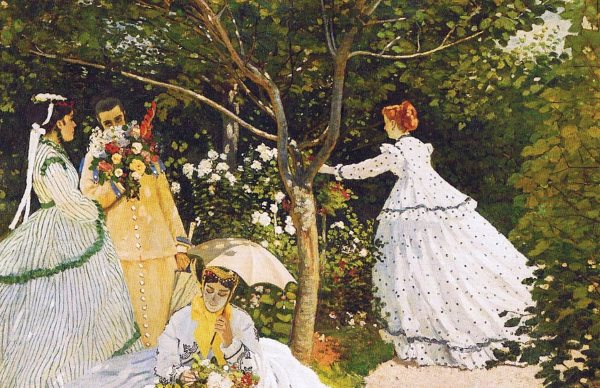 In the winter of 1868, during a stay in Etretat, a seaside resort, Monet painted one of his many landscapes of snow, la Pie, where the bird is only a punctuation standing out on the canvas invaded by a multitude of different whites. 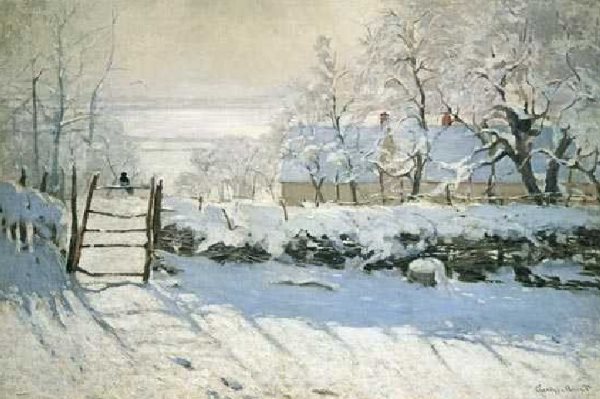 During a stay in Bougival in the summer of 1869, Monet worked with Renoir. The two painters systematized the principle of the division of tones as in la Grenouillère by Monet, one of the masterpieces of the Musée d’Orsay. 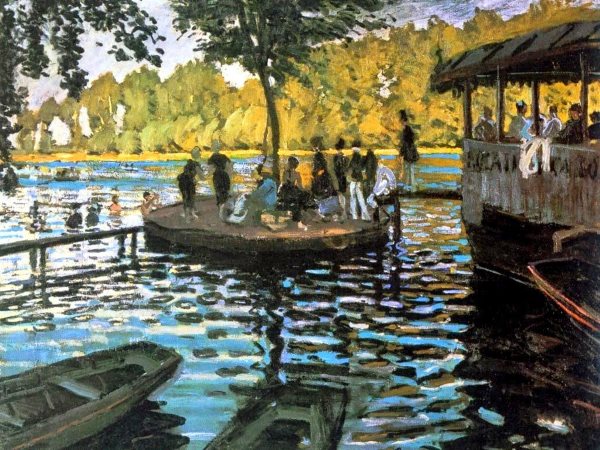 End 1870, Monet joined Pissarro in London, where the landscaper Daubigny introduced him to the art dealer Paul Durand-Ruel. During his stay in England, he painted fog landscapes, including the Parliament of London (1871). 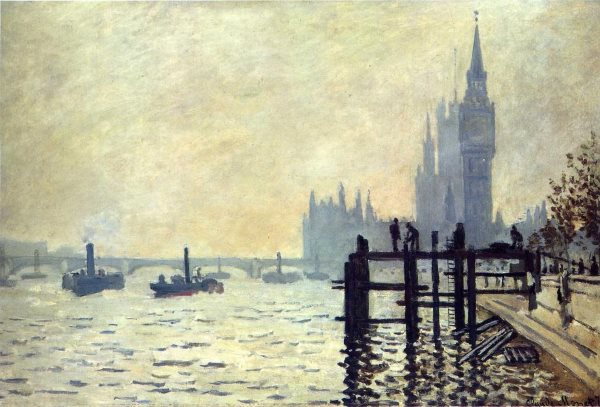 After a visit to Holland, where he acquired Japanese prints that revealed to him daring framing processes, Monet returned to France in 1871, shortly after the end of the war. In the last days of the same year, he moved to Argenteuil, creating in this small town on the banks of the Seine the real home of the Impressionist movement. His painting Impression Soleil Levant, painted in 1872 in Le Havre, was the target of the group exhibition organized on April 15, 1874 by photographer Nadar. This painting, now in Marmottan Museum in Paris, gave its name to impressionism. 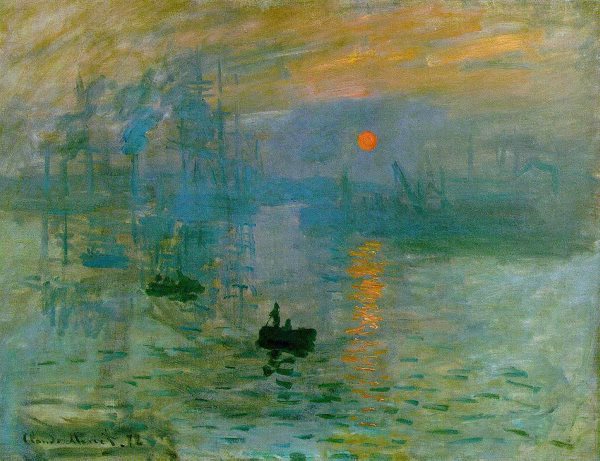 Even in his urban landscapes, such as the views of the Gare Saint-Lazare painted in 1876-1877, Monet exercized his vision of what he called a maximum of appearances, in close correlation with the unknown realities. 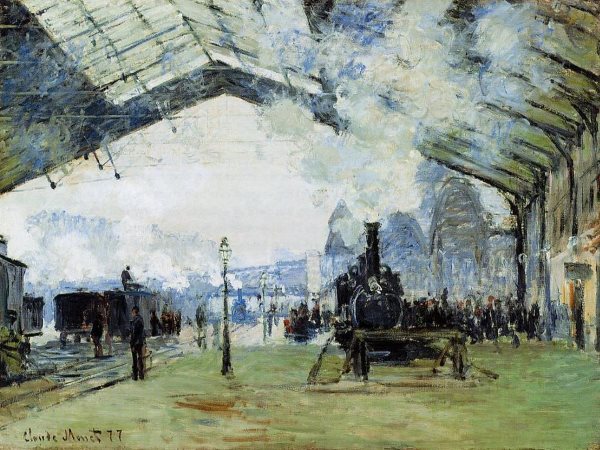 In 1878, the painter moved to Vétheuil before settling permanently, five years later, in Giverny, where he resided until the end of his life. Giverny is the story of a love at first sight. While on the train from Vernon to Gasny, the artist saw the village and fell in love with the place. In 1883, he moved to Giverny with his family. For 43 years, Monet lived a happy and inspired life in what was a remarkably remote place at the time. 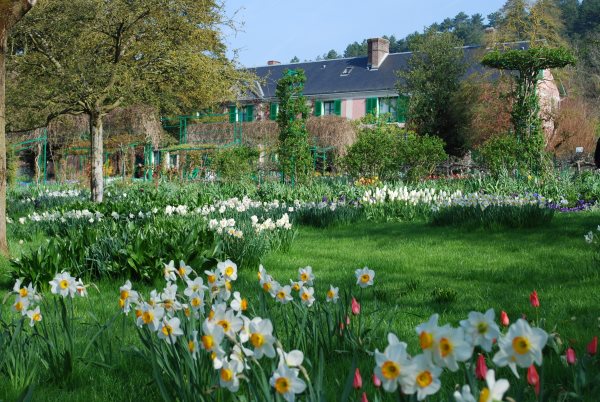 Monet got his inspiration from the pink-plastered house he acquired in 1890 and the surrounding gardens. As passionate with gardening as with colors, he gradually developed the large gardens. With infinite patience, he planted and sowed ageres, anthemis, nasturtiums, cherry blossoms, geraniums, iris, tulips, roses and other flowers. Monet bought the land below his property on the other side of the railway line. The place was crossed by a small watercourse, the Ru. Monet digged a basin dedicated to the culture of water lilies, an aquatic plant whose flower is majestic. A green Japanese bridge across the basin became one of his favorite subjects of paintings. 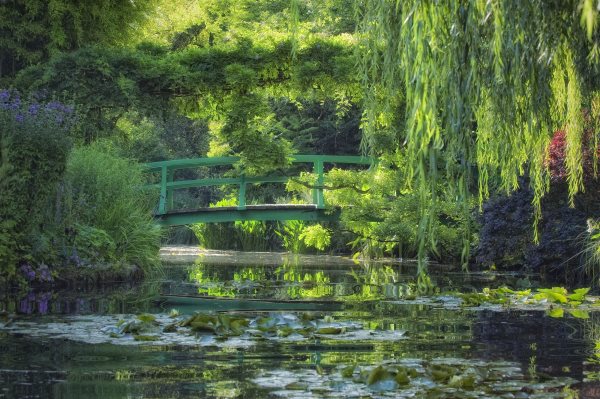 Claude Monet and Giverny Gardens are closely and emotionnaly related. So are the Orsay Museum and Marmottan Museum in Paris, both exhibiting many masterpieces by Claude Monet and other prominent impressionist painters. Combine a visit to Musée d’Orsay and to Giverny gardens in a one day Normandy bus tour dedicated to Claude Monet. 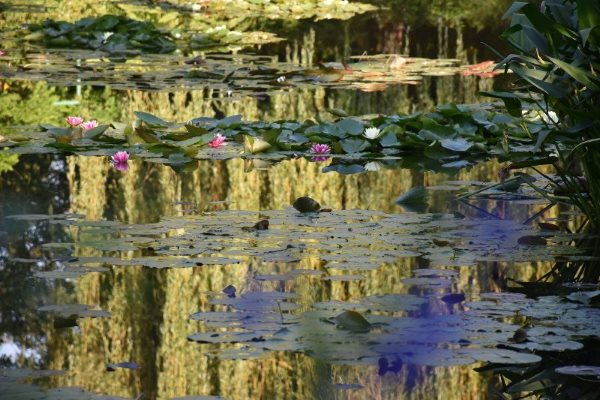 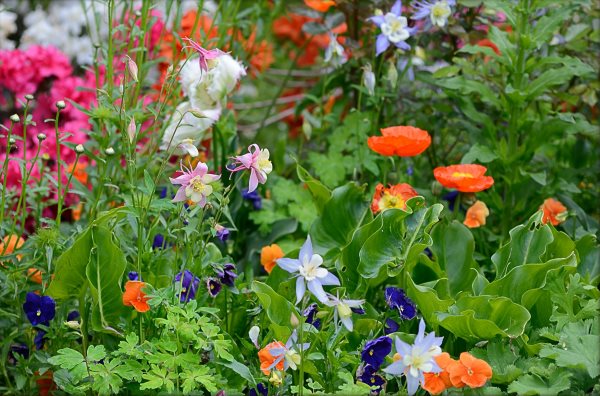