Le Panthéon stands in the heart of the left bank, the lively and intellectual student district of Paris animated by the Sorbonne University, the Collège de France and famous high schools. The massive 83 meter high Dome of Le Panthéon towers above 61 meter high Saint Geneviève hill, the second highest in the city behind Montmartre. Paris monuments.

The Panthéon was initially a church dedicated to Saint Geneviève, the patron saint of Paris. It is now a burial place for famous French people. French King Louis XV vowed in 1744 that if he recovered from his illness he would replace the ruined church of the Abbey of Saint Geneviève with a monument worthy of the patron saint of Paris. The king regained his health. Architect Jacques-Germain Soufflot was chosen and the construction began in 1758. Due to financial problems, work proceeded slowly. The church was finally completed in 1790, during the early stages of the French Revolution. The government turned the church into a mausoleum, a place to burry exceptional Frenchmen. The plan is a Greek cross with massive portico of Corinthian columns. The building is 110 meters long by 84 meters wide, and 83 meters high. The spectacular dome reaches a height of 83 meters. The portico has 24 large Corinthian columns. The inscription above the entrance reads “To great men, the grateful homeland”. The large crypt accommodates the vaults of great French public figures, including Voltaire, Rousseau, Victor Hugo, Émile Zola, Jean Moulin, Louis Braille, Jean Jaures and Soufflot, its architect. 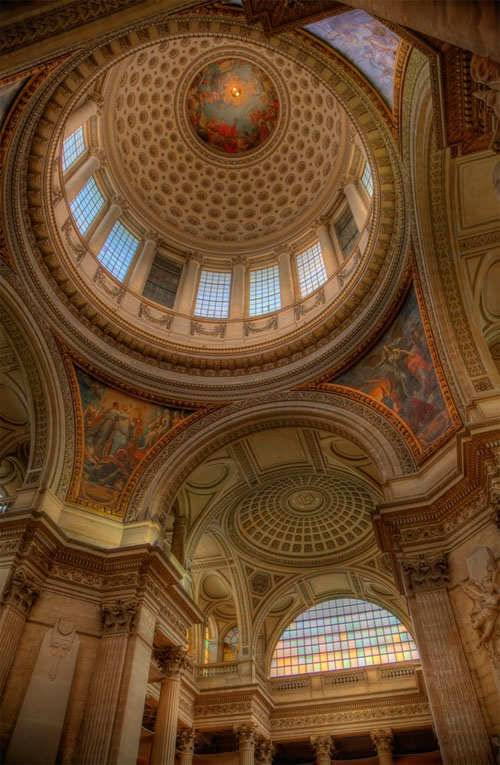 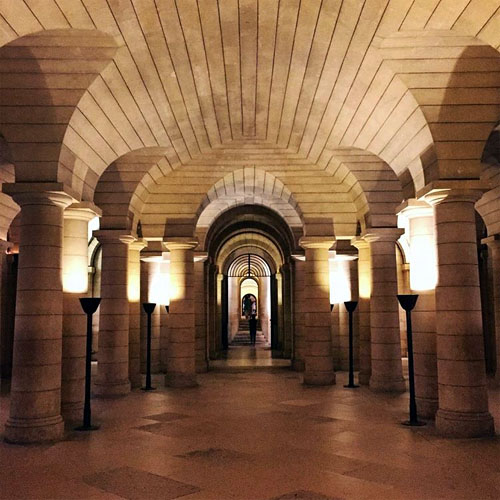 The crypt in Le Panthéon
Booking.com

Apartments and hotels near Le Panthéon on the map

Le Panthéon now functions as a mausoleum. It hosts the remains of Pierre and Marie Curie, the physicists who discovered radioactivity, Voltaire, Rousseau, Emile Zola and Victor Hugo, four famous French writers and philosophers, Jacques-Germain Soufflot, the architect of Le Panthéon, Jean Jaurès and Léon Gambetta, two French political leaders. The first person to be buried there was Jean-Paul Marat, a French revolution leader. He was disinterred later as his sanguinary role during the revolution was reasessed. 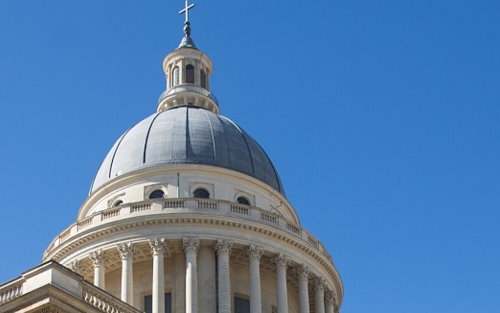 The pendulum in Le Panthéon

The first public exhibition of a Foucault pendulum took place in 1851 in the Paris Observatory. The same year, Foucault made his most famous experiment with a pendulum suspended from the dome of the Panthéon with a 67-m-long wire. An exact copy of the pendulum had been swinging permanently since 1995 under the dome of the Pantheon. 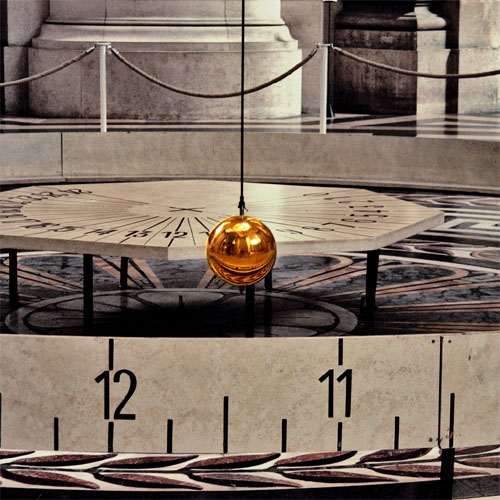 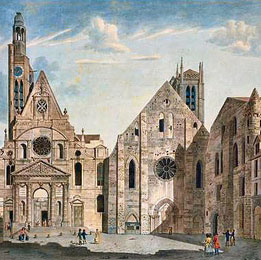 The Saint Geneviève church, to which the Panthéon succeeded, was part of the Saint Geneviève Abbey, one of the most prestigious in France. The church was erected in honor of Saint Peter and Saint Paul by Clovis, on his return from the battle of Vouillé, at the request of his wife. The site chosen was the top of the main eminence which dominated ancient Paris and where, in Roman times, there was a cemetery. Clovis was buried there, as well as Clotilde, and, after him, Saint Geneviève and several bishops of Paris. His tomb was in the middle of the choir, adorned with his statue.

The Basilica of the Holy Apostles, adorned with the most beautiful privileges by kings and popes, immediately submitted to the Holy See, quickly became one of the most famous in France. It was there that, in 577, Chilpéric Ier and Frédégonde made condemn the bishop of Rouen, Prétextat, who had married Brunehaut and Mérovée. Several other councils were held there in the 6th and 7th centuries; and because of the veneration inspired by the tomb of Saint Geneviève, the name of this touching patroness of Paris prevailed over that of Saint Peter and Saint Paul.

The Vikings burned it down in 857. However, the basilica was rather devastated than destroyed: it was grossly repaired, and it remained in this dilapidation until 1185, when Abbé Étienne de Tournay had it almost entirely rebuilt. Since that time, minor repairs were made to it, and at the time of its destruction, it offered a valuable model of the mixed architectures of the 7th and 12th centuries. Its facade consisted simply of a large, almost bare wall, surmounted by a sort of triangular pediment; it was pierced with three small doors and opened by a window in the shape of a rose. It dated, at least in its lower part, from the 7th century, as well as the side walls and part of the crypt. This crypt was populated with tombs: in the middle of them was that of Saint Geneviève, an empty tomb, for the relics of the virgin of Nanterre were enclosed in a golden reliquary exposed behind the altar. This reliquary was itself a monument: it dated from the 13th century and had been restored in the 17th century in a rather heavy style; adorned with twelve statues of gold, it was raised on four large marble columns and carried by four statues of virgins armed with torches.

In great calamities, when kings were sick, or when rain or drought made people fear a bad harvest, pilgrims took down this precious shrine for a walk in Paris with the greatest pomp. It was the clergy of Notre-Dame carrying the relics of Saint Marcel, this other patron of Paris, who came to fetch the saint and was went to escort her after the ceremony. All the bodies of the State, the clergy, the magistracy, the trades attended these solemn processions, where there was an incredible crowd.

Devotion to Saint Geneviève was very ardent among the Parisian people. The relics of the saint were only approached with tears, sighs, sobs, transports of passion. enthusiastic; she was asked by written notes for remedies for all ills, consolation for all sorrows; Sheets, shirts, and clothes were made to touch the reliquary. In 1793 this reliquary was destroyed, hammered, sent to La Monnaie, and the relics of Saint Geneviève were burned on the Place de Grève (nowoday Place de l'Hotel de VIlle); but the Paris Commune, which committed this sacrilege, dared to do so only overnight, for fear of popular resistance.

Towards the middle of the 18th century, the Saint Geneviève church threatened to ruin; it was resolved to replace it with an edifice worthy of the patroness of Paris. The new Saint Geneviève church, today called the Panthéon, was begun. The old church was destroyed in 1807, and the rue Clovis was opened on its site. There remains a tower, which is part of the Lycée Henri IV which dates from the 12th century.

The Saint Geneviève abbey was probably founded at the same time as the church. In the 12th century, it became the seat of a regular congregation, the Génovéfains, which in France consisted of more than a hundred houses. Its buildings and gardens occupied the space between the rue de l'Estrapade and the places of the Panthéon and Saint-Étienne-du-Mont. The Génovefains were rightly renowned for their knowledge, their theological work, their piety and their penchant for the doctrines of Jansenism. Their library was as remarkable for the beauty of the building as for the choice of books. The Saint Geneviève abbey was abolished in 1790. Most of these buildings are now occupied by the Lycée Henri IV. The famous library had remained until 1852 in the beautiful Galerie des Génovéfains, before being transferred to the Saint Geneviève library.

The presence of a library is attested from 831, but its construction in its current form dates only from the 17th century. Genovefain Claude-Paul de Creil erected the first wing in 1672, doubled in 1700 to reach a length exceeding 110 meters. Enriched by numerous bequests, the library was enlarged in 1730 by Jacques de la Guêpière. He drew it in a cross like that of the Jesuits in Rome. In the center, at the intersection of the four wings, he had a dome erected.

The premises of the old library are now the Lycée Henri IV library for high school and preparatory classes. It is exceptional in France to keep all the decorative elements of a painted dome, on the scale of that of the Lycée Henri-IV. The library dome is undergoing a restoration. 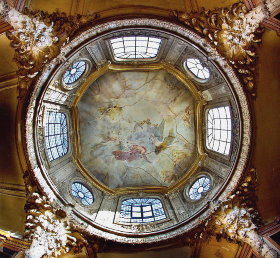